Ask a Comments Thread at a Highbrow Comic Books Blog

“I just find it hard to believe that anyone who ever actually talks to anyone can possibly believe that stuff.” 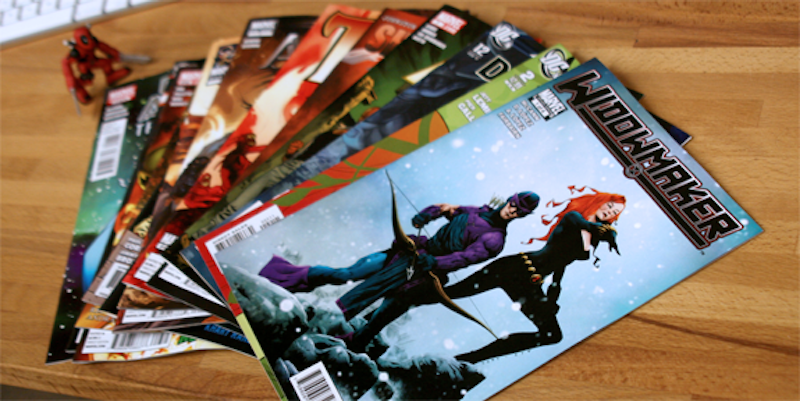 The following is presented with apologies to the Onion and thanks to the Hooded Utilitarian, a blog founded and run by my colleague Noah Berlatsky. The answers below are quotations taken from a thread at the Hood.

Like most music lovers, I've always considered vinyl recordings to be “warmer” and more resonant than digital. My sister and her husband both tell me this difference is a myth. Can you point us to any scientific data that will settle the argument? —In the Groove

Dear Groove: The curating of the Masters of Comics exhibit was no example of “institutional sexism.” That the exhibit featured all male creators—instead of squishing in moderate talents like Dale Messick or Cathy Guisewite—was that, because of various factors (sexism, less pay for equal work, the freedom-devouring condition known as “motherhood” [what good is it to have "a room of one's own," if the shrill cries of Baby demanding to be tended to NOW continually interrupt?], lack of role models), the comics field was overwhelmingly male-dominated.

My daughter, Emma, is a self-reliant 14-year-old who is already looking forward to her driver’s license. Unfortunately, I think her father is going a bit overboard in encouraging her. Yes, she's ready to practice, but not in traffic! Doug and I are separated, so addressing this issue calls for some diplomacy. How do you think I should bring it up? —Steady As She Goes

Dear Steady: Are there any radical academic feminists who are straight? I’ll trust you on Halberstam, since she seems to want to overthrow heteronormativity. She wants women to be more like men. That surely isn’t my desire (nothing wrong with that, but I happen to like a world with womanly looking women—yeah, yeah, I must be afraid of men wearing dresses). The difference here is that there’s a way of walking, talking and dressing that all have gendered influences and then there are those features that actually do have an effect on how one might competently deal with, or “master,” the challenges of life: reasoning, agency, etc.

My company's coffee room has long been the site of unwelcome messes. Recently I took matters in my own hands by posting a sign reminding co-workers that clean-up is our responsibility. I think my wording was polite, but a couple of my best office chums complained to me about the sign's “tone.” How can I smooth over our differences while standing by my basic point? —Clean-Up Time

Dear Clean-Up: I’m more an Adorno fanboy here, so the culture industry has more to do with the resistance to pop art than class. This isn’t the aristocracy any more, charged with maintaining culture. The way you can tell the wealthy these days is by the flagrant display of tastelessness. By and large, Adorno was right about the course of the 20th century, the culture industry has burrowed into every aspect of our lives and society. A resistance to pop art probably had something to do with similar fears (and for good reason). This has affected all classes.

In this day and age, I'm amazed that anyone maintains “herb” must be pronounced without the “h”! My cousin is one of the holdouts. Care to set her straight? —Get With It

Dear With It: Indeed we are all sunk into false consciousness so far that we are like those children neck deep in shit at the bottom of the cesspool in Spielberg’s Schindler’s List; human language and behavior is fully gendered and we men are dickkkheads. If you think you aren’t, then you are among the worst.

My landlady, a lovely and good-natured woman in her 70s, may not be as sharp in the memory department as she used to be. For instance, she has promised three times to replace a rusted drainpipe that came loose. How to insist on action when she honestly wants to do her best but may be suffering from confusion? —Word in the Ear

Dear Word: And again I say—do you really think that cultural ideologies and perceptions can’t be contradictory? People can’t both love and loathe the same thing? They can’t desire and be repulsed by their desire? They can’t see all-male communities as both quintessentially male in some cases and gay or feminized in another? I know that modernity posits rational actors and autonomous widgets and all that… but I just find it hard to believe that anyone who ever actually talks to anyone can possibly believe that stuff.

Confidential to Waiting and Hoping: I’ll let that be the last word, Noah. But by “genetic fallacy,” I meant this. Until next time.

—Ask a Comments Thread at a Highbrow Comic Books Blog is a steal of the Onion's “Ask a...” feature, which usually concludes with boilerplate saying the supposed column appears in more than 250 papers nationwide.