The Alien Standoff and the Basketball Hoop

My dream about a lost girlfriend. 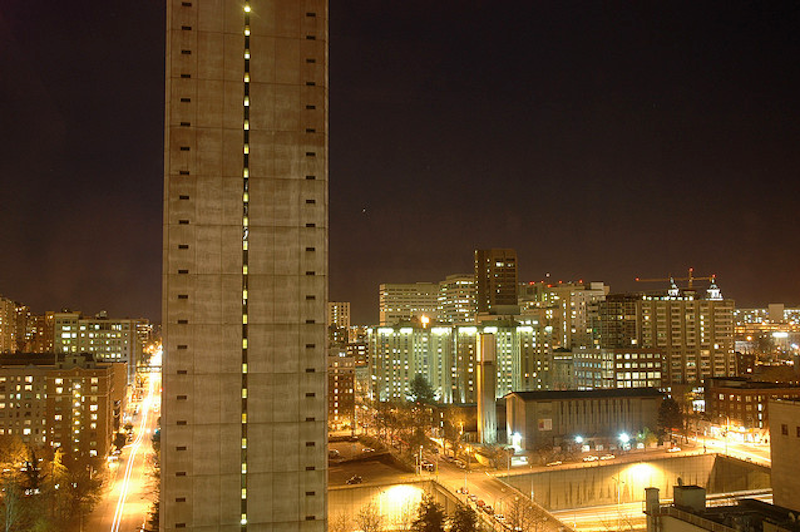 A couple of young men work in a corner of a vast office, an office that takes up an entire floor of an office building. In the corner of the corner, right where the walls meet, there is a basketball hoop. It's maybe a little larger than the sort of hoop used for Nerf balls, but it's treated as being the same size used in regulation basketball.

The two young men make up the record-keeping department for their organization. One of them is in charge, and he's trim and square-built with a clipped, sandy beard. The other doesn't come into focus; he's more the point-of-view character. The bearded fellow always knows what he's doing and moves with a clipped sort of purposefulness: always right angles and with no wasted motion. Offhand, he sinks a shot in the Nerf net while going about his business.

The second young man admires the shot. His boss reveals that at West Point he majored in basketball. Of course, he adds, that was a major reserved for underperformers; if you weren't going anywhere, you majored in basketball. The other young man gets a rare glimpse of what lies behind his boss, of the life that led to this point. On the one hand, there is the surprise that this capable, self-assured man considers himself an underperformer. On the other hand… here he is, in a two-person department devoted to filing away records and getting them out when more important people need them. In fact their corner of the office looks like a corner of a college library, one with dull-looking magazines about education ranged on metal shelves.

The second young man begins to sniff out a secret about his boss. There are stories the boss won't get down off the shelves for their superiors. Stories that have to do with a lone, white Air Force space craft hanging in the sky of an alien world, pinned nose to nose with a giant whorl of light, stuck there for nobody knows how long. This is a secret being kept by the authorities. The trail leads through database articles and items in education magazines, the resources of the two fellows' dull little department. The second young man realizes that his square-built, effective, sandy-bearded, unhappy boss is the child of a strange mating, a liaison between an earth human and an alien.

The reasons for this mating have to do with the white Air Force vessel that is stuck like a triangular chip in the sky of the aliens' planet. The young man is on to something. But watching him is a young woman with an elongated neck and lemur-like eyes. She's small but wide-hipped and long-armed, and she peeps out from her nest of cubicles, which is stationed perhaps 30 feet from the records department. Her job isn't defined exactly, but she's doing something much more worthwhile than the young man. That's the case even now that he's on the trail of his boss and his immense secret.

The secret and the watching lemur eyes build together in intensity, build until the second young man realizes he is a middle-aged man sweating in his sheets, wondering about the strange-looking, intelligent woman he lost so long ago. The oddest thing about the dream is that she really did look just the way described above: like a beautiful alien freak.