According to the NRA, women are the fastest growing population of gun buyers. 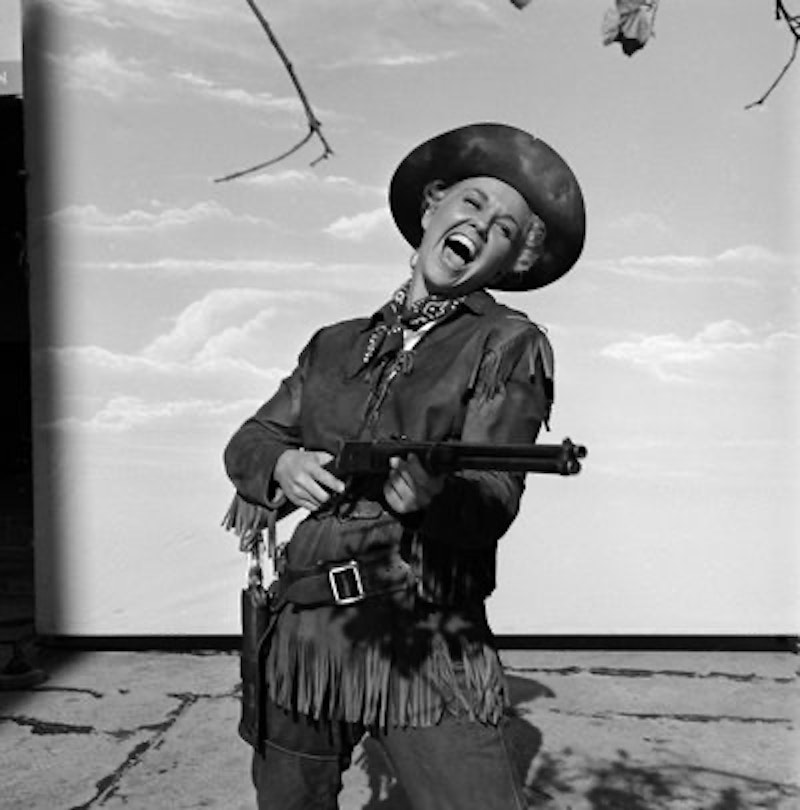 I keep a 20-gauge shotgun next to my bed. It’s simple: I live, alone, in the country. Although I can see the lights from the closest house a half a mile away, I could be mugged, raped and chopped into pieces and no one would ever hear a sound.

The gun gives me a somewhat sense of a false security. That’s because I don’t keep it loaded. I have two shells stashed in my nightstand along with a fingernail file, Chapstick, journals and other non-deadly items. I often wonder if threatened by an intruder if I’d have the steady sense to even load the weapon in time. I suck at shooting clays so there’s also the likely possibility that if successfully loaded, I’d be more likely to blow the crap out of my Victorian dresser than harm the perp.

So why the gun?

There’s always been a love affair with armed women in American history. Deborah Sampson dressed as a man and fought as a soldier during the Revolutionary War. In the late 1800s, proper ladies were laying down their needlepoint and picking up their guns. Women were turned on by sports like trapshooting, and were then being featured in popular illustrations. Gun molls in the 1920s were in vogue, and during the Great Depression were sensationalized by the infamous Bonnie Parker, of the dashing couple Bonnie and Clyde. One colorful female icon of her day was Calamity Jane. She outshot most grown men by the time she was 13. A consummate self-promoter, Calamity was successful not only in her Wild West tours, but also as a secret scout for General Custer. More recently, Maine novelist and militia leader, Carolyn Chute, appeals to New England’s independent bent, believing that women have the right to protect themselves since the government is no longer “of the people.”

And what about the gunslinging modern woman? The image of a modern woman protecting hersef is reinforced by the gun industry and the media. Men are in possession of most of the nearly 300 million guns but women are beating a path to ownership.

The National Shooting Sports Foundation keeps track of the increase among women purchasing firearms. Their last survey in 2009 found that gun-store owners calculated a 73 percent increase in female customers. Although the foundation is more interested in the statistics of new female hunters, they did report that the number of women buying guns for defense increased 83.2 percent.

But do these gals know how to pull the trigger? Especially under life-threatening situations? Many female owners are learning this skill. Diane Danielson, who runs the NRA’s shooting clinics for women, says recent statistics show her classes growing. They also reflect what her participants have told her. “Many of them find themselves alone for the first time in their lives. Some are widows, some are single mothers, some are just looking for a way to protect themselves, and this is why they’ve come to the program to learn to shoot,” Danielson said.

My philosophy is if you’re gonna shoot you might as well look good. Camo is not just for the good ole boys anymore. Laura Browder, author of Her Best Shot: Women and Guns in America, said during an interview that she remembers when Women’s Wear Daily pronounced “gun barrel grey” the new color for spring and sees lipsticks in the shape of bullets. Prios, a women’s hunting clothing brand created four years ago, has seen a 100 percent growth every year.

Despite this growing role of firearms in a woman’s life, the question remains, “Do guns keep women safe”? According to a decades-long analysis done by the American Journal of Lifestyle Medicine published in 2011, the answer is a resounding “no.” The study states that living in a home with a gun doubles the risk of being murdered or committing suicide. Just living in USA makes women 11 times more likely to be killed with a gun than our counterparts in the other nations included in the 25 highest income earners.

I’m just a country girl and my shotgun has become a part of my psyche. I’ve only grabbed it in the middle of the night twice in 11 years, both false alarms. I load and unload it every now and again for practice, but will it keep me safe? For now, it’s staying where it is. Locked but unloaded.