On Trespassing, Sea Glass and Madness 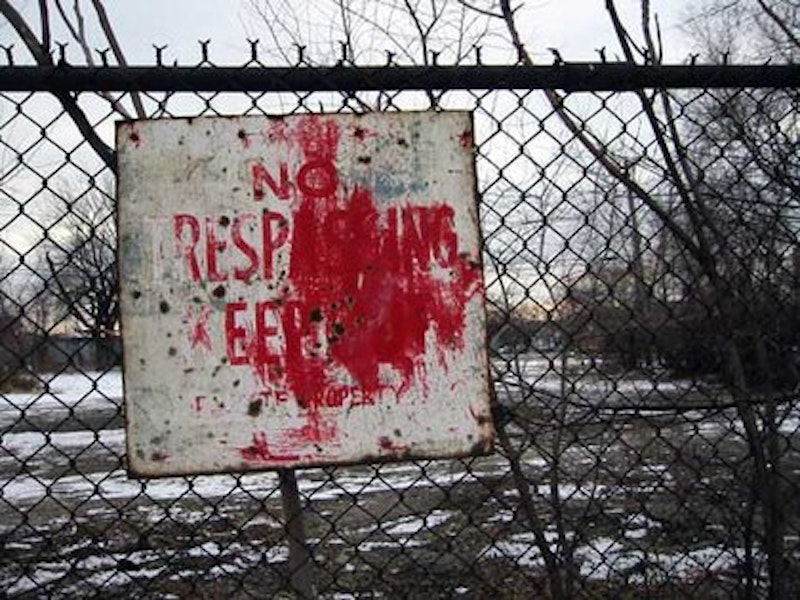 I’m a sea glass hunter. It’s what I do for a hobby and it’s therapy. I try not to horde the sea glass. I have two crab bushels full, total, most displayed in an apothecary jars in my parlor. I know people who have garages full. I’m completely picky about what I collect now—leaving the white and brown and green for the amateurs, taking only the best turquoise, and pale purple and perfectly aged pieces that have stood the test of time and tumbling in the Chesapeake Bay.

On the island where I write, there aren’t really sea glass beaches for hunting, There are only tiny spots, usually tucked near rip rap and docks and private property, and you have to know where they are, charm the people who own the properties, and so forth. I have three-four spots where I find the best glass: the cobalt blue, the yellow, the pink, the most prized, red.

The best piece of sea glass I’ve ever found is a phenomenally rare oval coin top black glass (as rare as red or more) bottle stopper. It is from the 1700s, and the kind of bottle stopper that would cap a bottle of booze on a pirate ship. To the people who collect and sell sea glass professionally, I could sell it for hundreds of dollars, not that I would. Why would you sell your best piece? Anyway, I found the piece on the alleged private property of a crazy woman and her crazy son. Their two houses are beside one another on a point near the old harbor; the island has American Indian history and if I knew how to spot arrowheads, I’d have tons of those, too. Instead I impress my kids with a blacklight when I show them uranium glass from the 1930s  that glows so bright a bowlful could light up a room. Mom collects radioactive sea glass.

The challenge is getting to the very tiny beach where the best glass on the island washes up. I’d heard stories of the crazy woman and her son. I had seen the son one day, he stood in front of the dilapidated house and stared at me, and I got the impression I should walk quickly or else join the legions of serial murder victims in his basement, now partially underwater because the island is sinking. Or rather, the bay is rising.

The other day, I entered the water at low tide in my camo waterproof insulated boots purchased at the island’s bait and tackle shop and two sizes too big because they’re made for watermen and there’s no such word as waterwoman: the men’s size seven was still in the store because it was too small for the oyster and crab industry workers. As I tried to concentrate on staying out of water deep enough to flow into the boots and freeze my feet, I heard a woman yelling.

I’d never seen her, but now here she was screaming at me, running up and down the shoreline with her torn clothes and three inch gray roots in her hair. “This is my property!”

“Hi, I’m Mary,” I said calmly. Which made her stop running back and forth.

“I’m not saying what you’re doing is wrong,” she said.

“Ma’am, I am in the water, and I will not go on your property,” I responded.

“You can’t go over there past the rusty fence,” she said. “It’s my property.” She pointed to the very small beach where I’d found the bottle stopper. “I will stay inside the high tide line,” I said. “I’m just sea glass hunting.”

Not a teacher I’d want my kids to have, I thought. “You teach sea glass?” I asked; still calm. “You can’t go on my property!” she yelled. “I’m not going to go on your property, ma’am,” I said. “I’m in the water. The state law allows that no one owns up to the high tide line.”

“What, a sea glass hunter?” I said, and laughed as she ran toward her son’s house.

But then that wasn’t funny because I figured she was going to rat me out to her son, who would come down and shoot me for trespassing even as I walked in the water that nobody owns. I saw fantastic pieces of turquoise, old pottery, cobalt blue. Without leaving the water, I grabbed one great piece of 1930s pottery while she ran to go demand my trespassing death penalty.

But I never stepped out of the water onto the tiny beach past the rusty fence. Maybe one day, in a kayak, at night, with a blacklight flashlight, when I’m feeling gutsy, because neither she her nor her Silence of the Lambs son can see the actual beach they don’t really own from their property.