Tolkien's The Hobbit as Children's Literature

The pleasure is the shuffling of kids' vs. adult perspective. 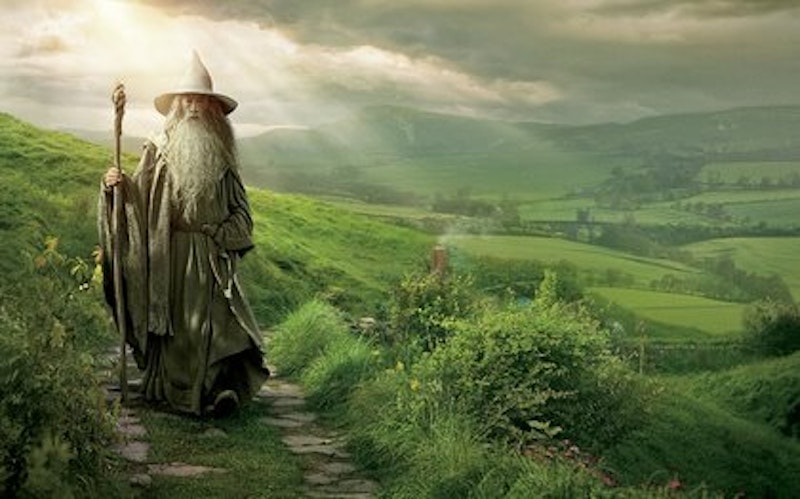 Old Took's great-grand-uncle Bullroarer… was so huge (for a hobbit) that he could ride a horse. He charged the ranks of the goblins of Mount Gram in the Battle of the Green Fields, and knocked their king Golfimbul's head clean off with a wooden club. It sailed a hundred yards through the air and went down a rabbit-hole, and in this way the battle was won and the game of Golf invented at the same moment.

That's one of my favorite bits from The Hobbit. It's also, perhaps, the passage that pushes most insistently against Tolkien's reputation as it's developed. Tolkien is generally lauded for his careful, monumental world-building—for his intricate languages and his sweeping sense of history. And yet, here he is, with deliberate whimsy, knocking (driving?) his reader out of Middle-Earth and back to just-plain-England for the sake of a silly and utterly gratuitous joke. I suppose it's possible that the elves and dragons play golf in Middle-Earth, but whether or not, it's an incongruous idea, which makes tends to make the milieu unravel, rather than weaving it together. Putting hobbits and golf together is the act of a storyteller who has his eye on effects other than consistency.

Those effects are, broadly, those not of epic fantasy, but of children's literature. It can be hard to remember after reading the very serious, very dark Lord of the Rings, and even harder after watching the definitely-for-adults movies, but the fact is that The Hobbit is for kids. There is certainly a lot of danger and tension, and I've no doubt it's given many a six-to-eight-year-olds some serious nightmares. But be that as it may, the fact remains that in its approach to character, and to its own world, it is in some ways much closer to something like Doctor Doolittle or Alice in Wonderland than it is to Tolkien's more sober trilogy. For example, when Bilbo is trying to distract giant spiders and lead them away from his companions, he sings a taunting song that is essentially a children's rhyme. After he's done, Tolkien writes:

They made for his noise far quicker than he had expected. They were frightfully angry. Quite apart from the stones no spider has ever liked being called Attercop, and Tomnoddy of course is insulting to anybody.

Again, this isn't world-building, or even logic, exactly. It's silliness for the sake of silliness, where motivations and narrative are subordinated to the joyful clip-thunk of language. The monstrous Shelob that Frodo fights is a terrible monster, gross and inhuman. But the spiders Bilbo battles act like children, driven to madness by schoolyard taunts. And the pleasure of The Hobbit is, in no small part, that shuffling of kids' perspective and adult perspective; the way the adventure shifts from larger than life to smaller than life in a blink, so that you feel that, in this world, children (or hobbits) really can conquer the great, grand world, or, alternately, that the great, grand world really can be child-like.

I love The Lord of the Rings too, movies as well as books. But it's too bad that critics, readers, and writers of fantasy these days are much more comfortable with the modes of the later Tolkien than with his earlier, lighter prelude. Harry Potter, for example, largely abandoned its Roald-Dahlesque nonsense impulses in favor of supposedly more sophisticated good vs. evil bombast. Twilight, The Hunger Games, Game of Thrones and His Dark Materials all might have LOTR somewhere in their heritage, but certainly none of them have The Hobbit. There are series that still hark back to fantasy's children's literature roots, like How To Train Your Dragon, but they don't seem to have the same impact, or to be taken as seriously as cultural touchstones.

This is a shame in part because the children's literature tradition is so vibrant; there simply aren't many fantasy stories, in any mode, better than Alice in Wonderland or Peter Pan—or The Hobbit and Narnia, for that matter. But it's also unfortunate those children's stories are decidedly more sophisticated than the adult epics with their grim quests and bloodshed and high seriousness. No matter how intricate the world you build, that world still isn't the world. A story that acknowledges its own nonsense is, to that degree, more true, and more knowing, than one that doesn't. Golf is, after all, more real than beheading goblins, no matter how grim and epic you make the latter.