Landing in the old-person aisle at Walgreens. 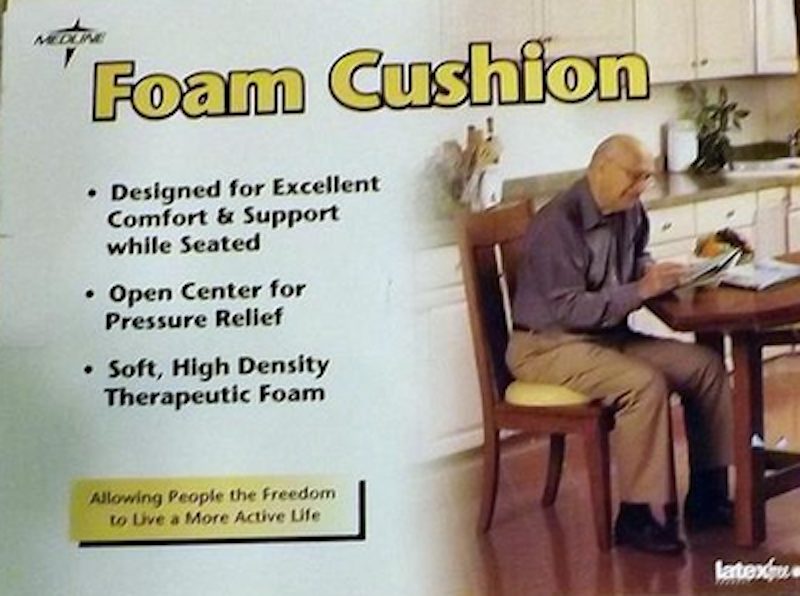 We moved last week, and to celebrate, I promptly fell down an entire flight of steps. My padded ass took the bulk of the blow, as evidenced by the bread plate-sized black and purple bruise covering the entire back of my upper thigh. There was much swelling, ice application, and thankfulness for my 800-mg Motrin prescription for migraines. Sitting down was excruciatingly painful, and before long I was Googling tailbone injuries.

Researching medical issues online is almost never a good idea, as inevitably there will be graphic, horrifying photos and multiple harbingers of impending death. I learned there are three treatments for an injured or fractured tailbone, that evolution-leftover completely useless tip of our vertebrae. The first intervention involves the insertion of a physician’s gloved finger into the rectum and realignment of the misplaced useless bone from when we were goddamn monkeys that we don’t need anyway.

So no way, obviously, because although I’m a big believer in chiropractic care, I nearly fainted even thinking about an adjustment made via that orifice. The second possibility is open back surgery and removal of the tailbone. No thanks, no need to cause my body additional trauma, not to mention probably a lengthy recovery period.

And the third, and by far most common, treatment is nothing. Even though I can feel the most horrifying “squishing” around of the bone as it grinds during efforts to simply sit down, the medical universe, recognizing we don’t need the extraneous piece of our skeletons, simply tells us to deal with it. The “too bad for you, dumbass” approach is at least also the least horrifying, so I set out for Walgreens in search of a “donut cushion.” Apparently the round, pastry-shaped pillow ($24.99!) is found in the “I’ve fallen and I can’t get up” aisle, right next to the Sitz baths, Epsom salts, Preparation H and toilet assistance bars.

The donut cushion box features an old man doing a crossword puzzle at the table, resting comfortably on his macaroni-and-cheese colored memory foam, a serene smile on his face. Two of my kids were with me, and could be heard snickering. I distinctly heard the words “old people section” and a bunch of laughter upon viewing of the product. I cleared my throat and explained that tailbone injuries were suffered by many people who weren’t old.

I might as well face the music. I’m not getting younger anytime soon. With 50 on the horizon, the math may as well be seen for what it is. We moved to a house that happened to have a first-level, handicapped-accessible in-law suite that my husband helpfully pointed out was coming in handy right away. I actually use the safety bar in the shower. And I hope the kids, way up on the third floor, manage to bring their laundry to the laundry room and announce when they’re out of toothpaste or shampoo, because I’m scared to go up there now for fear of falling down the same flight; the experience was traumatic enough to give me nightmares along with that literal pain-in-the-ass bruise.

I can’t really drive at night anymore because the brightness of the oncoming headlights is a migraine magnet. I’m taking vitamin supplements, had to stop going to hip-hop cardio because I sprained my Achilles tendon, and am never awake past 10 p.m. Defcon level OLD: I am watching TV game shows. Getting older seems to be about a reduction in mobility overall. I’m not afraid of it, necessarily, but somehow it keeps surprising me over and over again. My body just isn’t what it used to be, and being clumsy obviously isn’t helping the situation.

I ended up buying a much less expensive and equally-cushiony $7.99 travel pillow in the clearance section. We’re all just one diagnosis away, my boss says, and though it seems doom-and-gloomy, he’s correct. Hey, at least I didn’t break my hip. Yet.