Leo told me a story. 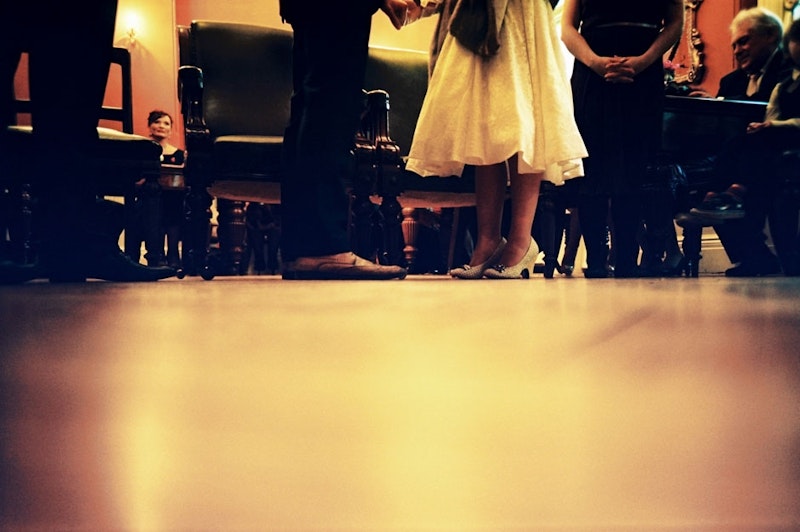 “I only want the sleeves and the cuffs shortened," I told him. "You know the look. The sixties mod look.” Leo the tailor pinned the cuffs dutifully.

“Are you the one getting married?” he asked.

“Oh, no I would never show up in a suit like this."

“When my father met my mother he couldn’t afford a suit. He had to borrow one. It wasn’t the best looking suit, but since that day they’ve been together fifty years. What matters is what’s on the other side of the suit.”

After Leo offered this insight I grinned, paid him the $35 I owed, and walked out the door.

The best advice I’ve heard usually occurs through aphorisms. To me, Leo’s words were beyond aphorism, they cut through and probed at the atoms of it exposing a core of sheer integrity. Perhaps my surprise was unwarranted, as it seemed to mostly stem from me infusing a sense of novelty in hearing how an older man regarded his father’s wedding essentials.

Having been behind a camera for a handful of wedding ceremonies I’ve observed varying levels of what is deemed essential. Some men demand that all their groomsmen wear matching seersuckers. Some insist on playing ritual instrument bowls at the altar with their bride to be. Others make sure that their aging grandmother from Sicily gets more camera time than anyone else. Some let their father-in-laws rent out an entire club in the heart of Washington D.C. even though they themselves harbor reservations about it not reflecting their more humble upbringings. Most are just happy to be there, seemingly deferring any extravagant decisions about botched vegan cupcakes or other wedding planner hiccups to their anxious brides.

For Leo’s father his essentials existed on an entirely different plane. I strained somewhat to envision him, confabulating a narrative from books, cinema, and memories of my most distant relatives. I pictured a rugged but taller version of Leo; him making a phone call and trying on the suit; him borrowing a bit of money from his parents to ensure that there was enough to provide wine for a party after the ceremony; his family helping unstack all of the chairs at 2am in the dance hall. I strained less to imagine what he might feel. I imagine that in his heart, 50 years ago there was that cohabitation of fear and joy that feels less like emotion and more like an unavoidable force to be reckoned with. Outside of marriage I know that feeling. It’s one that I always return to on occasion when fishing.

My own father, who has never offered his insight on marriage, once wore his own suit, and his own fears and joys. He did so twice. The lingering question for me becomes how can one man transmit to another man the idea of marriage? It seems that it can only be adequately explained through direct experience, like five minutes of strapping yourself in for Batman the Ride versus having only interacted with it through five years of anxious dreaming. Men continue to jump on the ride which would lead to the conclusion that there must be something to it.

I stopped back by Leo’s the other day to pick up his handiwork. He paid due justice to my single style reference. It is by all measurements very “mod.” At this moment I’m sitting in my chair and typing fluently from within its cotton embrace; no squirrel arms, just straight ergonomic flow. Perhaps it will be my new writing look. The look that will function as my sign for “out of work professional” at café’s during the week. Maybe a discerning eye will probe in my direction and seeing no ring find itself unexpectedly on the other side of my suit.