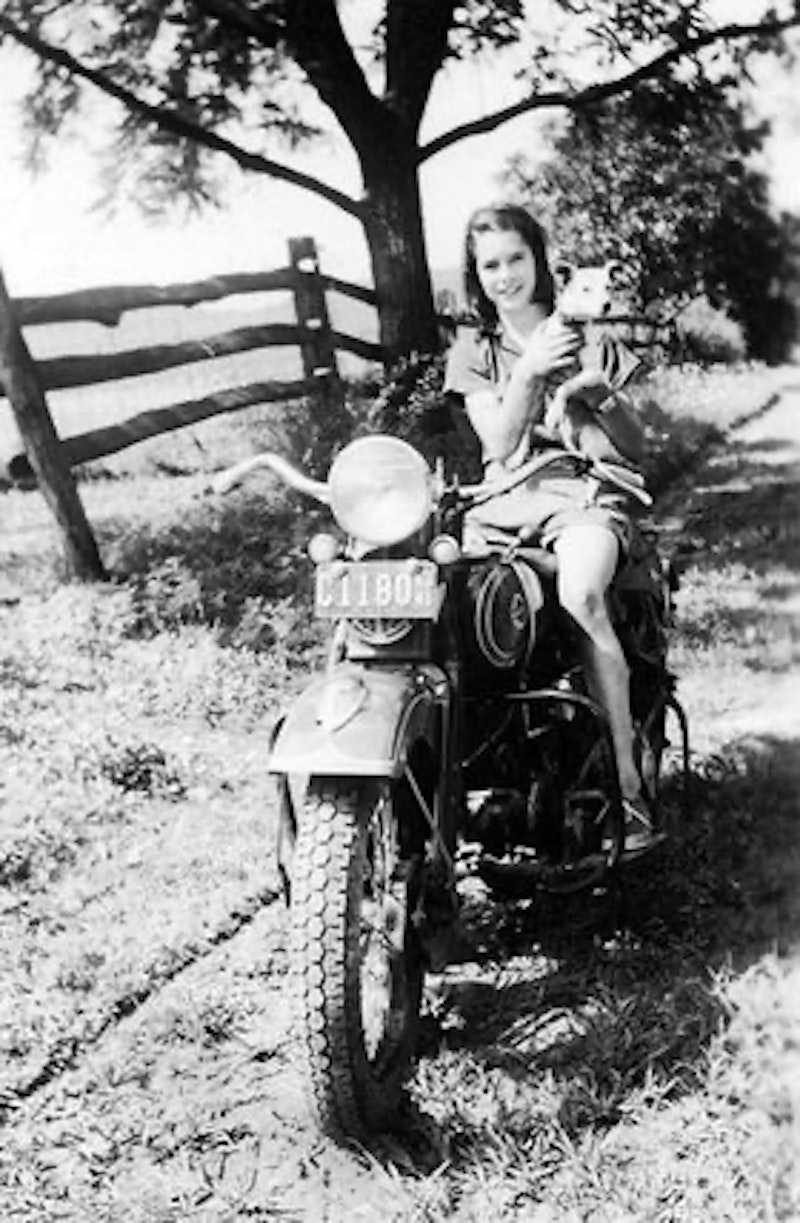 No matter how close your parents, there’s no cigar like a cool aunt or uncle. They lack that parent bone. Yeah, that one. That Put Your Eye Out bone. That Eating Frozen Pizza Will Give You Weevils bone. On a good day they might buy you a kite and your first real cheroot.

All right, so they weren’t really so Uncle Buck, but just the same they made you feel part scofflaw, part adventure hero sidekick, like all you were missing was an identical kid-size uniform and a monkey in a tiny monkey suit identical to yours.

No monkeys at my Aunt Mary’s, but for a while, in addition to dogs and cats and budgies, she rehabilitated an injured wild sparrow. Organic animals aside, her menagerie included a marble ferret, a marble rabbit, and a granite grasshopper that she sculpted in her studio, and sometimes outside on the back lawn, wearing a face protector and warning me to stay well clear of the flying chips. Good as her getup and tools were, the sparks, bright in the sunlight, were the best.

Aunt Mary exhibited her work locally and eventually sold the animals at another gallery in New York City. Killed me. Her sculptures were representational with modernist lines. I remember the ferret’s liquid form take shape, suggesting sly, serpentine movement.

Pretty early on, when my family visited her at my grandmother’s country place, she let me hang out in her studio and watch her chisel, carve, drill, saw, plane, stain and polish. She primarily worked in mahogany, teak, walnut, ebony and rosewood. Her studio was all hardwood sawdust and varnish vapor and linseed oil and taught me the drop dead enchanted smell of art and craft.

I was permitted to poke through a bank of vintage Gerstner tool chests, their drawers lined with green felt and filled with tiny specialized files and carving instruments. I practiced adjusting her European beech wood workbench, a more recent acquisition with the movable cleats and different vises. Her studio walls were hung with braces to twist augur bits of all sizes stored in the felt-lined drawers. A band saw big as my father commanded center studio, accompanied by a belt sander that when going full tilt grit against teak, made the most excruciating sound in my world to date.

By about second grade, I had run of the hand tools. By fourth grade, with supervision, I cut and sanded scraps on the power tools. Made me cross-eyed happy. First I built a lot of clunky toy ships, then I chiseled out a few dodgy salad bowls and, as a pre-teen I carved a palm-sized cherry wood lozenge of a creature I named Ohl. Sixty years later, I still have all my digits, which is to say after those earlier years I cake-walked through junior high shop and never did much woodworking since.

No, Aunt Mary didn’t take me aside and make a craftsman out of me. Cool aunts and uncles certainly do mentor the exceptional nephew or niece. For the rest of us however, it’s not a guild apprenticeship. It’s a chance to ride occupational shotgun and have a crack at busting up an adult with intentional on-the-job humor.

Aunt Mary and I went fancy wood shopping at obscure lumberyards. We went band saw blade shopping at Monkey Wards. Then we went Gilbey’s Gin and Schweppes tonic shopping at the package store. Mid-afternoon, I was allowed one taste of Aunt Mary’s gin and tonic, chased with my own bottle of quinine water, which I liked to imagine, protected me from Malaria, as well as affording me savoir-faire I couldn’t pull off with a Pepsi.

This was the heyday of Commander Whitehead, an Explorer’s Club-looking gent who presided over Schweppes’ ads in my mom’s New Yorker magazines. Impeccably tailored, yachtsman’s tan, Rolex-ed wrist on the bar, a jib of that cut was something to which I vaguely aspired. Someday, I reasoned, perhaps I too could be a front man for carbonated mixers.

On these errands, Aunt Mary drove us in Walter Winchell’s black tank of an early 40s Packard sedan. It was never identified as Winchell’s, so I was oblivious at the time, but my aunt’s aunt Sophie got a deal from the mid-20th century gossip columnist who introduced his radio show with “Good evening Mr. and Mrs. North America and all the ships at sea, let’s go to press!” At the time, all I knew was Looney Toon lampoons of the radio star. I never connected the car and the cartoons. I thought the astonishing auto was another random part of Aunt Mary’s deal, the tip of an iceberg of cool beyond comprehension.

Fun as it is now to drop Winchell’s dubious name, the cars of cool aunts and uncles need no celebrity connection to be so charmed. I remember an old pickup truck driven by a pal’s cool dad, a close variant of the cool uncle. The circa 1940 contractor’s rust bucket lugged us and scrap iron all around North Jersey dumps. Its rattletrap torn tobacco pouch of a cab was just as swell as the mile-wide bench front seat facing the dreamboat Deco dashboard of my auntie’s plush Packard.

Cool aunt/uncle music is characteristically whatever never gets played at home. In my case, I had a tiny record player and a few kiddie 78s, but my parents never listened to music unless it happened to be part of a TV variety show. Conversely, Aunt Mary didn’t own a TV. And in the late 50s, that was akin to owning a second head.

Her LP collection was heavily chamber music, plus Segovia, Julian Bream, supplemented by a bunch of 78rpm sets. Pine Top Smith boogie piano. Woody Guthrie. Leadbelly. And true to proto folkie form, Mary played some guitar. And mandolin. And tenor banjo, piano, ocarina, a clutch of recorders, chromatic harmonica­—the usual musical household clutter. When I visited, I could have at them all whenever I wished, without fear of lessons or scolding for not being serious. Again, if I asked, she’d show me some chords, but I showed no special promise so she let me monkey around and get comfortable holding stringed instruments in preparation for a lifetime of spirited playing guitar along with my stereo.

That, I think, is the ultimate coolness of such aunts and uncles. They let you simply be next to them. Whether they’re making their own fun or taking care of business, you make their scene.  Proximity is all. Not parent or exactly a pal, they leave you largely to your own devices. You might be initially and superficially indulged, but in the main, their focus is their activity, their agenda, not how much it entertains and enthralls you. “That’s your business, Buster Brown,” says the cool aunt or uncle. “I have things to do. Wanna tag along?”

Aunt Mary picked up a little day job money candling eggs at a poultry farm a few towns over and I would go tag along to, uh, help. We’d stroll down the great long hot gantlet of the stinky chicken house making our way to a back room and the most marvelous machine.

You held each egg up to a light source and then pushed it on a track into the machine that sorted them by large, extra large, jumbo, that sort of thing. The contraption was mesmerizing, for a while anyway, with all these eggs rolling different ways in the dim yellow light of the candling lamp.

“Blood Spot!” I was taught to look for this in the candling window. Fertilized eggs, which my aunt referred to as “Dog Eggs” were culled and she kept these to feed her three, Walnut, Teak and dear Po, who perked up at the phrase “toast crust.”

Today, my aunt is in her 80s and lives, with some assistance from friends and hired neighbors, along with many more dogs and cats on a farm of hundreds of acres in western West Virginia. She and a partner bought it, fixed it up, and worked it largely themselves for years. And since her partner died, she now leases the land for a neighbor’s cattle.

I’ve visited her a few times after many years and she’s cool and generous as ever. She gave me Sony’s first teeny radio made with an Integrated Circuit that she bought about the day it went on the market. Aunt Mary is old school geek. Bard College math major, physics, astronomy, tech buff from way back, all that stuff, but she’s got a lot of dogs and cats on her mind too and between that and the farm, no time for the Internet. She’s that cool.

I should mention the kit computer she built and I less than artfully deconstructed in 1960. It was real basic, essentially a mess of switches made from pegboard discs, wire, nuts, bolts and flashlight battery and bulbs.

Aunt Mary. That’s her all right, seated on a neighbor’s Harley, circa 1930s at my grandma’s Jersey country place, now at the bottom of Round Valley Reservoir. Some people just burn brighter. And some others are lucky enough to bear witness.