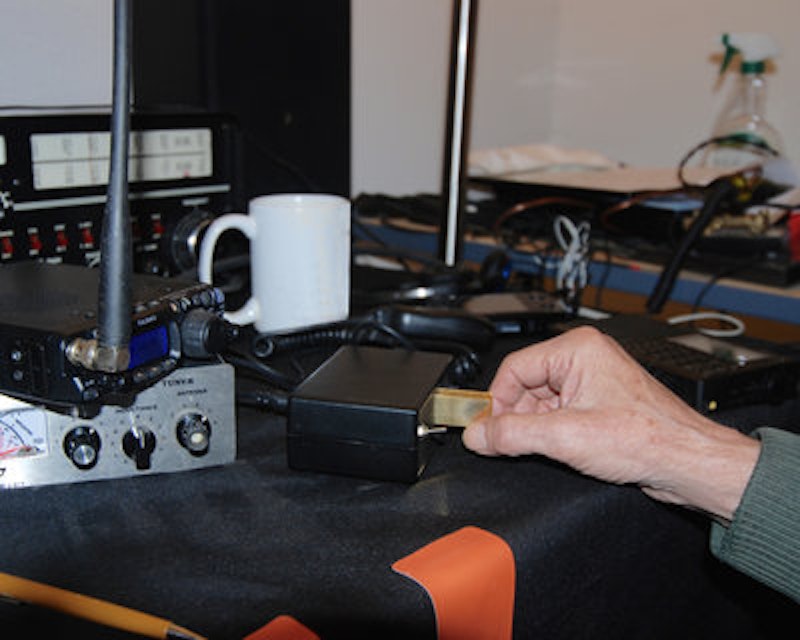 My family didn’t much do death. We kids were not brought to funereal events, family or otherwise. My family was not religious or terribly social, so we siblings found ourselves at sea when deaths of friends’ relations obliged our attendance during calling hours, services, all the mysterious rituals to which regular people generally become accustomed at an early age.

When my dad died in his mid-50s, we sibs somehow got it together and, with much help from a responsible adult, one of my parents’ oldest friends, managed to front a memorial service, a veteran’s burial, and a reception at our mom’s place for a sizeable crowd of mostly younger reporters and editors with whom he worked and surprisingly mentored, and of whom I knew almost nothing. Further, I haven’t discussed that event much since with my siblings and I don’t know what else I’d add beyond the little I’ve said to this day.

Thirty-five years later, K. was my first buddy to die. We shared a quirky hobby, ham radio, and K. lived on the Upper East Side of Manhattan, where apartment realities made it very difficult to install outside antennas or escape the intense electrical hash that’s a big wet blanket on New York City ham radio fun. So every so often, K. would visit me in the Catskill Mountains, a few hours drive from the city and we’d casually operate from my radio shack in ham contests. A crackerjack Morse code telegrapher, K. manned the key and I kept the logbook. Once, shock of shocks, we won a regional award without staying up all night, shamefully hitting the hay before midnight like a pair of geezers exhausted by the Early Bird Special.

Old radios. Kid radio memories. New radios and new technologies. K. was a retired software engineer, with many years at a couple of big aerospace contractors. Selected for admission to both MIT and the United States Naval Academy, Eagle Scout K. opted for MIT and the rest was a successful career as a longhaired code-writing hippy boffin extraordinaire.

Once we got tech topics out of the way, we’d tuck into the usual X-files—UFOs, secret NASA agendas, socio-political-pseudo scientific conspiratorial all-night AM radio la-dee-do-dahs, the good stuff for which we both enjoyed a lifelong weakness.

The subject of Pluto rose above the noise level in the last few months of my ever-more frequent conversations with K. His fascination was a mash-up of science and not-so-non-fiction, anticipating photographs from the New Horizons space probe, while fighting his medicated fog to plumb a new book that folded Pluto and the exoplanets into an evolving NASA conspiracy paradigm.

During these conversations, I struggled not to broach the most obvious aspect, the planet’s namesake, the mythological Lord of the Underworld. In years past, he would’ve cracked jokes about it, but no more. He read Jung and the usual loonies. He was having ever more trouble with his pain drugs and how loopy they made him feel and I saw no benefit in stoking the boiler of what was already surely a runaway train of thought. So I played my usual role as the skeptic who wants to believe, and K. did his best to crawl through the wreckage of his pain killer and read another chapter about Pluto best he could as he got ever more unable to speak.

In the moment, it was buddies as usual. A great escape, we often enjoyed this stylized conversation when K. seemed well. An outlandish theory is posited. A mild critique is offered and rebuked. A joke is made to diminish the difference of opinion. Skeptic evidences sympathy for limited aspects of outlandish theory. Still farther-out stuff is introduced and finally humorously tabled for another day. Next topic, rinse and repeat. Call it 18 holes of nonsensical camaraderie. It was our way of playing golf.

When he died, K. was a year older than my age of 66. In the last month or so I escorted him to the cancer clinic for two appointments. He refused to let anyone enter his apartment. Once his condition forced him to leave his digs, I joined a couple of K.’s closer friends and visited him a few times on the hospice floor of a Manhattan nursing home.

Just before and after K was moved he called me many times day and night. He’d say a few words with great difficulty and then hang up, only to call back minutes later. Pluto was usually one of the words. And that was fine. He needed someone to whom he could say Pluto and wouldn’t respond WTF. All right. I could handle that. For someone of my age who loves cartoons, it’s impossible to hear “Pluto” and not think of Mickey’s dog. Now I think how much pleasure it would have given K. to see the pictures of the planet getting clearer by the day.

Then he stopped calling and hanging up. And then he died.

Huh. So that’s it, I told myself. In professional terms, K. was stratospherically above my pay grade. However, in personal terms, while I was no Eagle Scout or MIT EE, there was a bit of parity. We both had some fun. I can’t speak for K., but I’m guessing, like me, he’d been loved and always ate well enough. It’s not about any particular metrics really, just a good measure of luck and lifespan in a world where many receive exponentially less. And no matter more or less, the point is always finally that’s enough.

I’ve felt that feeling of finality before, that that’s enoughness. When I’m in New York City, I feel it very slightly near the edge of subway platforms. And I’ve felt it far more when non-contemporaries died. Still, that was nothing like this.