A City Kid in a Coonskin Cap

Glam camping in the mountains of North Carolina. 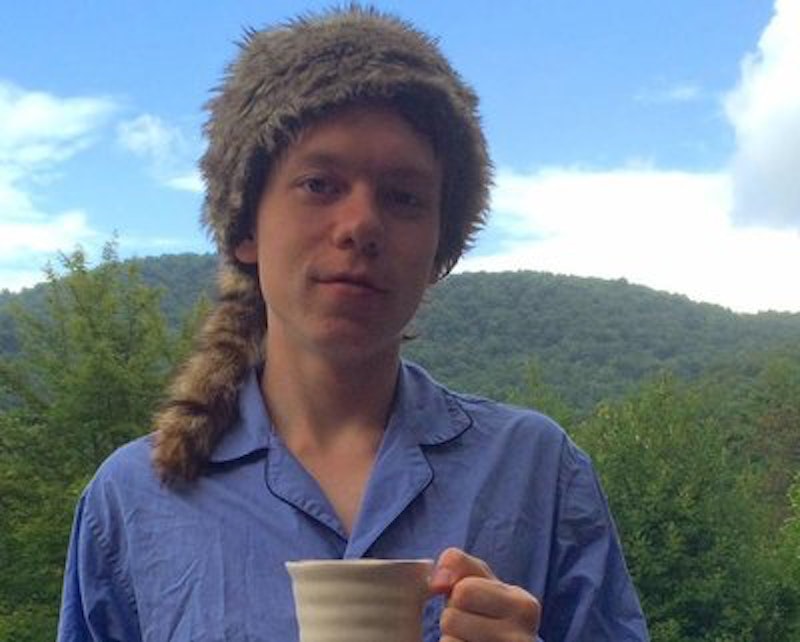 I was not nurtured in nature. I didn’t see frost on grass, owls overhead, starry skies, sterling swing sets, darting deer, or wildlife besides packs of pigeons feeding on hot dog buns. Tiny trees were enclosed in curbs and parks dwarfed by skyscrapers. Neighborhoods of houses with yards and woods to walk in were mythical, visions inspired by commercials for action figures and my dad’s memories of growing up on Long Island. He exalted the freedom of roaming barefoot in the woods beyond cul-de-sacs and sledding in a winter wonderland, while also stressing cautionary tales of friends who were killed by cars and vengeful swarms of hornets. The Great Outdoors was forbidding, not free, dangerous and full of traps and attacks that we’d never dare test. By the time my family left Manhattan, I was an indoor cat, and besides, playing outside was always pretty boring. Super Nintendo and Nickelodeon were more satisfying than a trip to Central Park or lounging in Washington Market.

I cannot hold the mountains or grasp the sky. I’ve never been in shape or particularly enthusiastic about physical activity—climbing is not my bag. My closest friends either grew up here in Baltimore or in the Midwest, where doors were left unlocked and kids were free to play anywhere they pleased before nightfall. It’s in their blood and imprinted in their earliest memories, and they get the same rush on a hike that I feel whenever I visit New York and walk the streets of Manhattan—anonymous in a crowd and contained within a concrete grid. The constant stimuli of city streets calms me down, and the vastness of the woods and quiet of the trail makes me anxious and overwhelmed. A walk in the woods is just as dislocating for me as navigating through cars in Midtown was for my girlfriend on her first trip to the city. I got a taste of my own medicine when I mistook a moth for a butterfly, the same “Oh, you” snicker that she got for mispronouncing Houston St.

When my roommate Brooks invited Leigh Ann and me to a three-day double date in the mountains of North Carolina, it was out of courtesy, a Hail Mary pass that I wouldn’t possibly accept. The worst week of my life was a sixth-grade camping trip to Echo Hill on Maryland’s Eastern Shore. This was no frills, sleep in a tent, shit in a hole, and eat from a slop bucket. It was scarring. I felt helpless, trapped, alienated and unable to have fun like all of my classmates. I actually prayed to my mother, hoping against hope that she would receive my signal and come and scoop me up immediately. On the second to last day, I was beaten and brooding at the breakfast table, and it must’ve been obvious and contagious, because my history teacher turned to me and quipped in good humor, “You’re bringing us all down.” Good, I thought. This is no way to live, for me at least.

But Brooks promised our cabin had the necessary amenities—beds, central air, a grill, a hot tub, cable TV—and that made it an easy yes. To steal a line already stolen by my friend Martin, “I don’t go anywhere unless there’s a lobby.” Bear Den in Spruce Pine, NC indeed had a lobby that doubled as a general store, where I eagerly picked up a coonskin cap, chintzy as it was. It does nothing but shed, but it’ll do until I skin one myself. We visited the Orchard at Altapass, where six generations of an Appalachian family played guitars, banjos, and mandolins and sang wonderful songs that all blended together as I perused the single rack of used books. I got three for four bucks, one of which immediately caught my eye, a paranoid right-wing religious screed called The Great Controversy: The Storm Is Coming. When I went to the register, the lady rang up my other books and got to this one at the end, took one look and sighed, “Ugh, this is one of those right-wing conspiracy books.” Looking for the right barcode for used books, she told her manager that she’d give this book to me for free, “just to get it out of the store.” This portly fellow looked at her sternly and deadpanned, “I don’t care if you don’t agree with the politics of the book, you have to charge him for it. Unless you want to put two dollars in the register yourself.” He moseyed away, and she whispered, “He can kiss my ass. This one’s on me.” Later on, Leigh Ann and I were holding hands walking down Main Street in Spruce Pine, and someone in a passing pick up truck screamed “FUCKIN’ FAGGOT” at us, and we both burst out laughing. I can’t believe that had never happened to me before, but fortunately, at 22, it doesn’t sting, it’s just hilarious, and we laughed about it all morning.

Our trip was a blast: we cooked burgers and kabobs, went walking through butterfly gardens, gem mines, and mountain view trails, doing our own thing led by Brooks, a native of North Carolina. He caught his first fish years ago at Bear Den, although his efforts this time around were less successful, foiled by a crappy gas station rod and reel. No matter: hanging out in the hot tub and stargazing made up for that. I rarely drink, but on the second night, Brooks’ girlfriend Emily offered me some quality vodka, and two hearty swigs got me fairly drunk. I quickly remembered why I don’t enjoy drinking—out of control and uninhibited, it’s like being on a rollercoaster, another activity that never appealed to me. Sobered up after a few glasses of water, the four of us enjoyed another quiet night in the hot tub, trading tales of Slenderman and howling into the night, listening in awe as our voices travelled and bounced back against the mountains, the kind of echo no guitar pedal can ever produce.

Earlier that day, we visited Grandfather Mountain and its Mile High Bridge. As helicopters lingered below and clouds passed through us, I finally got it. The panorama of the whole scene took me aback, standing on top of a mountain breathing elevated air and whipped by wind. This was something I’d never seen before, and I could feel it. Looking at a mountain just doesn’t do it for me—I’ve seen it on TV and on postcards. But perched on a rock high in the sky, I felt the rush, and knew I’d remember that sight for the rest of my life.