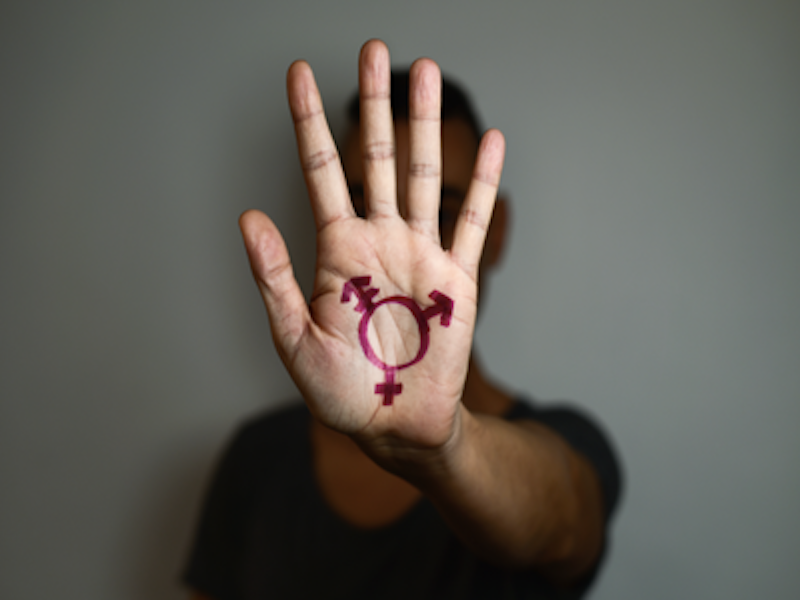 As transgender people have gained more visibility and recognition, there has been an inevitable backlash. The current wave is a remarkable stew of the same conservatives who’ve always been hostile to LGBTQ rights, and the radical feminists who see no place for transgender people within the movement. Enter Kellie-Jay Keen-Minshull.

Keen-Minshull recently got press for leading a fundraising project to erect a billboard in Liverpool, posting the dictionary definition of "woman" as "adult human female." Advocates for transgender rights saw this as a trolling maneuver. I agree with that assessment because it struck me as a classic move to get people mired in semantics, and away from the more fundamental human rights conversation. This was especially clear during a talk show appearance when Keen-Minshull told the trans woman on the panel that, "You can do anything you like, just not be recognized as a woman in law." She goes on to argue that the trans rights movement is "an absolute assault on women and womanhood." In fact, I found many of Keen-Minsull's talking points to be a hodgepodge of feminist language while, to my ear, extolling her conservative bona fides.

In an essay on the billboard situation, my colleague Chris Beck refers to Keen-Minshull as a "feminist blogger." Looking for her blog turned up some unexpected information. Earlier this year, British police investigated Keen-Minshull for online harassment of a trans rights advocate who is also the parent of a transgender teen. I wasn't surprised to see support for her on trans-exclusionary radical feminist (TERF) sites, but I was stunned to see her championed as a free speech advocate on the sort of Christian websites usually hostile to feminism, in addition to the MRA blog, A Voice for Men. I’d seen some social media rumors that TERFs and conservatives had begun to unite in a mutual contempt for trans people, and began to wonder if Keen-Minshull exists where these groups converge.

With the help of some very nice people on Twitter, I found that there’s indeed a great deal of overlap between TERFs and anti-LGBTQ conservatives, and it's no accident. At the 2017 Values Voter summit, Meg Kilgannon, director of Concerned Parents and Educators of Fairfax County, spelled out the ways conservatives could exercise a "divide and conquer" strategy: "For all of its recent success, the LGBT alliance is actually fragile, and the trans activists need the gay rights movement to help legitimize them. Gender identity on its own is just a bridge too far. If you separate the T from the alphabet soup, we’ll have more success... If you attack trans people, you become the proof they rely on for demanding protection. So don’t play into their victim narrative because in this culture war, they are the bullies, not the victims...Elected officials who vote for this nonsense are fair game."

Kilgannon went on to cite the Hands Across the Aisle Coalition. The group utilizes the radical feminist argument that "Gender is not an identity, it is a tool of patriarchy," while also making a religious justification: "If God made men and women fundamentally and comprehensively different, then the idea that a man could ever become a woman (or vice versa) is simply impossible." Either way, much of their dualistic focus is on singling out trans-women and denying their rights in the name of protecting cisgender women and girls. They almost never mention the fact that trans-men exist.

The Hands Across the Aisle Coalition isn't the only group engaged in this game of doublethink. The Women's Liberation Front (WoLF) preaches radical feminism, but in practice the only thing it does is attack trans people. In 2017, WoLF joined forces with conservatives from the Family Policy Alliance and Focus on the Family to file a suit against the Obama administration's expanded protections for transgender students. In a blogpost, WoLF also referred to Keen-Minshull as a "UK friend," and defended her alleged harassment of the parent of a transgender teen. Keen-Minshull herself has alleged that trans activists have "harvested" photos of her children from social media, and have posted personal information about them.

Chris Beck wrote, "Transgender activism has an authoritarian, censorious strain, and a history of threats and violence against dissenting women, who sometimes have to exit via the backdoor when they gather to express themselves." I hate to wallow in both sides-ism, but it’s sometimes unavoidable. I won’t defend invading the privacy of Keen-Minshull’s children, and I consider it as vile as TERFs violating the medical privacy of trans people.

Beck also observed, "People’s thinking about gay people evolved gradually over time, to the point where even conservatives updated their opinions. This time around, it’s more like a new reality forced upon people who are going to get shamed if they don’t get onboard." But he fails to recognize what pushed people to evolve their attitudes about gays: increased visibility. Until very recently, transgender people were largely obscure, and public representation was sparse, and often insufficient.

The most significant change has been social media. Until the last decade or so, transgender people often had to commit social suicide in order to fully transition—completely turning their backs on their old lives and building new ones out of nothing. Social media has been a useful tool for the trans community to connect in a way that allows for living openly. While increased visibility has also increased scrutiny, it's also telling us that transgender people never should’ve been forced to hide in the first place. We're still in an era where there are a lot of growing pains in and around the movement, but that doesn’t mean trans activism and feminism are inherently adversarial, and in fact the opposite is true. In a recent essay, transfeminist activist and author Julia Serano wrote, "Virtually every single person that I know who is actively involved in feminist causes and organizations, Women’s and Gender Studies departments, and so on, are supportive of trans people and issues. And all of the trans people that I personally know are supportive of feminism and women’s issues... While such radical feminists do exist, they represent a very small minority of self-identified feminists. And most contemporary feminists reject gender-critical/TERF ideology, not only because it is anti-trans, but because it is explicitly anti-intersectional.”

I never found a clear answer as to how much Keen-Minshull genuinely leans conservative. The reason I became curious about the relationships between conservatives and TERFs is that while they’re accusing trans people of being inherently dishonest, they also appear to be crafting their own structures of duplicity. The result is that we’re still talking about the basic definitions of words, when we should be talking about the tremendous amount of discrimination trans people still face, and how to solve it.