A short story about the coolest dad in town. 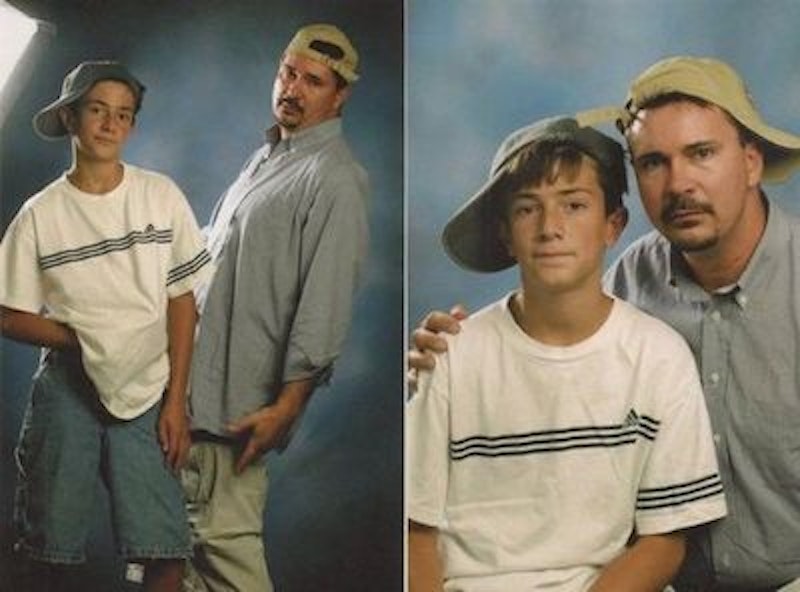 The cool dad became a cool dad very late in life. Up until that point, he had just been a cool dude, doing cool stuff like sleeping past noon, attending singer-songwriter shows at local coffee shops, and staying consistently "baked" and hung over. After his son was born, the cool dad determined that he wasn't going to let this new responsibility crimp his cool style. Far from it, in fact: he was going to be cooler than ever.

The cool dad raised his son in the coolest way imaginable. He never married his son's mother, which he figured was a pretty cool move for a “Man Going His Own Way,” and instead drifted in and out of his son's life. When he did find time to "hang" or “chill” with his son, he introduced him to cool things like the music of Captain Beefheart and the poetry of Charles Bukowski. By the time his son turned 13, the boy had become very cool indeed. This development pleased the cool dad greatly, since it confirmed that "tight-assed" squares like his lame-as-hell old man were completely out of touch when it came to this whole parenting racket.

"See," the cool dad bragged to his cool friends after one particularly fun week with his now-cool son, "I never have to bust my kid's balls or get all 'tight-assed' with him. His mom Camden gives him shit from time to time, but I'm always there to bail him out. I mean, last week I taught him how to make a gravity bong out of a soda bottle and got him high as hell. He skipped his classes for a couple days and we just sat together on the couch, drinking Natty Light and rapping about our fave Dylan tunes.”

The cool son, already too cool for school, stopped going there. Wandering the streets, he fell in with a crowd of filthy “gutter punks,” who struck him as just about the coolest people around. This cool crowd, who spent their days eating out of dumpsters and busking for spare change, didn't get all worked up about stupid shit like his cool dad did, who was always twisting the cool son's arm to “rap about” feelings and ideas and whatnot. The cool son soon realized that the cool dad, when considered carefully and without the least trace of familial sentimentality, was lame as hell. He did the coolest thing imaginable, which was running away from it all.

The supposedly cool but actually lame-as-hell dad chalked up the cool son's disappearance to youthful "wild oats" and put him out of mind. He returned to his happy existence of hanging out, getting high, and thinking those deep thoughts that less cool dads never considered. The lame-as-hell dad didn't want to seem like a "tight-assed" authority figure, and besides, the cool son would figure these things out on his own, much as he himself had years earlier.

When questioned about the cool son's whereabouts by a pair of detectives, the lame-as-hell dad found himself unable to offer any concrete details. He did, however, respond to the detectives' queries with an eerie equanimity that shocked even these jaded veterans. "Yeah duders, me and the boy were thick as thieves. I didn't worry about what was happening with him. It seemed to me he was just a cool kid, having a cool time. He'll grow up on his own, right? No need to get 'tight-assed' like my old man was with me. When I'm chilling, I think about how it'd be so much sweeter if we were more ‘loose-assed’ and not up in everyone’s business. You feel me on that one, dawgs?"