There’s No College in College Point 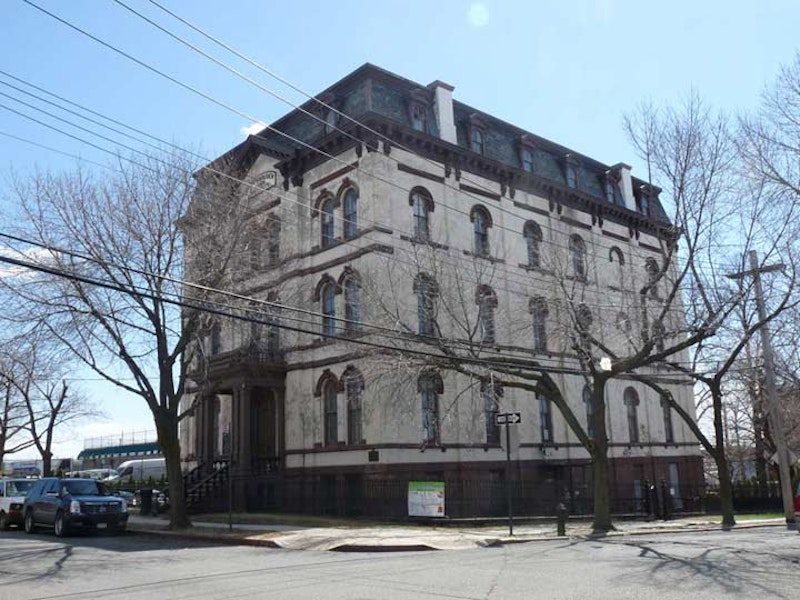 There’s no college in College Point, and hasn’t been since about 1850, when St. Paul’s College, whose site we will visit later in the tour, was converted into an elementary school and then a summer resort. The Rev. Augustus Muhlenberg founded the college in 1835 as a seminary. Communities known as Strattonport and Flammersberg united to form College Point in 1867.

Though the Lawrence family, a name familiar to Queens historians, were the first to settle in what is now the College Point area in the colonial era, it was an entrepreneur named Conrad Poppenhusen who built downtown College Point to house his factory workers, and it’s his legacy that shapes College Point to this day. A bust of Poppenhusen can be found in the center of “town” at College Point Blvd. and College Pl.

College Point today is about as fully realized as small town life gets within the five boroughs. The East River, Whitestone Expressway and the former Flushing Airport separate it from the rest of the city. The Long Island Rail Road stopped running there in 1932. However, a number of city buses are routed there and College Point is well worth a day trip from “out-of-villagers.”

Rubber manufacturer Conrad Poppenhusen’s philanthropy and good will was, in good measure, responsible for College Point’s early development. The Poppenhusen Institute, built in 1868 at what’s now 14th Rd. and 114th St., featured the nation’s first free kindergarten, as well as a justice of the peace, the first home of the College Point Savings Bank, German singing societies, the first library in the area, a court room, the sheriff’s office with two jail cells, and a grand ballroom. He owned parts of the Long Island Rail Road.

Today the Institute (pictured at top) is used as a community center and offers karate and piano lessons, summer band concerts, exhibits, classes and other programming, while the ballroom is rented for wedding receptions. It recently celebrated its 150th anniversary. 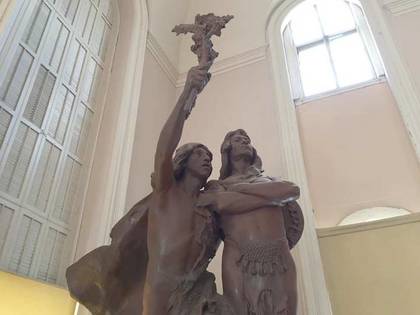 The upstairs main hall contains two artworks of note: “The Triumph of the American Union,” by German immigrant Friedrich Spangenberg, and, shown above, “Coming of the White Man,” by Hermon Atkins MacNeil.

McNeil donated “Coming of the White Man”—actually a plaster cast of a bronze statue completed in 1904 for a city park in Portland, Oregon—to the Institute in the early-1900s, when he was serving as head of the Institute’s art department. It depicts a chief of the Multnomah tribe and his chief aide standing on a large, boulder-like pedestal.

The sculpture stood in the Grand Auditorium until 1980, when the Institute was threatened with sale and demolition, at which time it was sold. The plaster cast was generously donated back to the Institute in 2002, and it again stands majestically in its former spot. 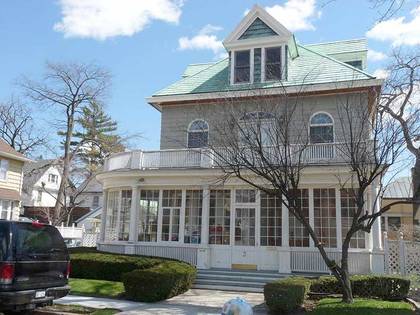 The Herman Funke Estate, adjacent to the Koenig-Boker mansion, has fortunately survived as Beech Court, on 121st St. north of 14th Ave. The cul-de-sac retains several outstanding homes, including a Queen Anne classic and an Art Moderne, one of two in the area. (The other one is on Malba Dr., a couple of miles to the east.) 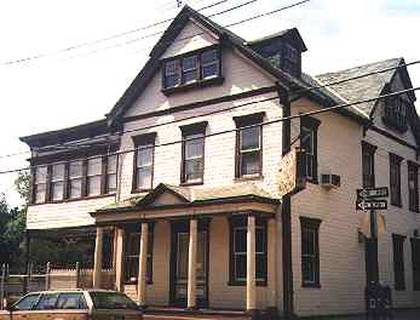 When I first spent time in College Point after moving to Flushing in 1993, there were some structures that have since succumbed to the wills of real estate developers. The first is Flessel’s Tavern, formerly at 14th Rd. and 119th St. Flessel's was built in 1872  when Queens was double its current size, including all of Nassau County, and before it was a part of New York City. It was built during the Ulysses S. Grant administration and was there before the Brooklyn Bridge connected Long Island to New York City. But Flessel's didn't make it into the 21st Century.

I’d long known about Flessel's, even before I moved to Queens in 1993, from its description in the AIA Guide To New York City. I admired its out-of-time quality, at least from the meager photographic evidence. After moving to Queens, I’d always talked about getting up to Flessel's for a drink or a meal. But I’m a procrastinator, and it never happened. Flessel's closed for good in the spring of 1998, the property was sold, and the building was demolished in December of that year.

The building that later became Flessel's Restaurant was originally built by Joseph Witzel, a College Point landowner who also built a long-gone resort called Point View Island in Whitestone. Probably the only reminder of Joseph Witzel's former holdings in the area was the "W"s on the columns of the side porch that remained throughout the tavern’s many proprietor changes. Over the years, the building changed hands a few times. It has been used as both a hotel, bar and restaurant throughout its long history. It has been known as Witzel's, Eifel's and then, Flessel's over the years. German food and drink was a specialty as a rule.

Incredibly, Flessel's was never named a landmark by New York City, which would have saved it from extinction. Local preservationist Paul Graziano said in an interview with the Whitestone Times in June 1999, shortly before the building was razed: "It's a perfect example of a building that should have been landmarked 30 years ago but because of the politics in Queens, it never was." Flessel’s ornately carved bar featured a solid onyx rail imported in 1903 and beveled glass behind it. Its exterior signature was its ancient neon sign that dated to the 1930s. The tavern had upstairs rooms that were lodgings at one time. 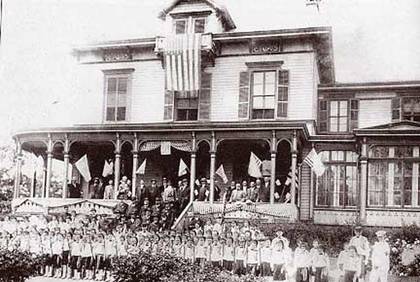 In the mid-1800s, Frederick Koenig, a German banker and a partner with Conrad Poppenhusen, built a large, wood-framed, hip-roofed mansion with a wraparound porch colonnade at where 120th St. north of 14th Ave. would be. After Koenig returned to Germany he sold it to another German businessman, Frank Boker. The short driveway to the mansion from 120th St. was named for him. The mansion became a hotel, the College Point Clubhouse, and was divided into apartments, all the time falling into greater and greater decrepitude. At length, it was razed in 2004.

The old mansion stood in the middle of 120th St.: it was in a bad position when cross streets were cut through early in the 20th Century, and unlike other houses in this circumstance, it was never moved. The old Grandview Hotel (see below), at 13th Ave. and 123rd St., was in a similar position. 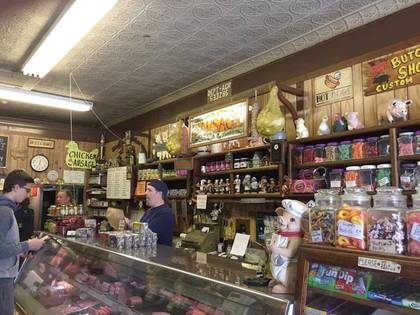 Empire Market, 14-26 College Point Blvd., was founded in 1921 by the Lepine family and has been in this location for over 90 years. The Empire is old-school. German groceries line the dark, wood-paneled walls. Smoked pork products like bratwurst, landjaeger, knockwurst and bacon are made in-house, sauerkraut is sold by the pound, and there’s a large collection of sweets for the kids. 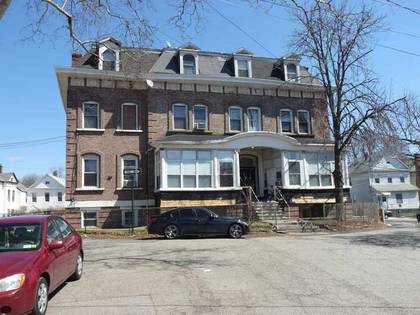 The traffic circle at 13th Ave. and 123rd St. is occupied by just one building: the red-bricked, dormer-windowed former Grand View Hotel, built in 1853 as Herman Schleicher’s mansion. Schleicher supported the South in the Civil War, and ran guns to the Confederates. It became the Grand View Hotel, whose elevation permitted views of the East River and Flushing Bay, and later was divided into apartments. The building predates the College Point street grid, so instead of moving the building, planners laid a traffic circle around it. 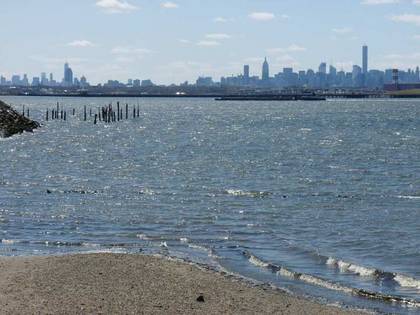 The riverside spot where the park now stands was previously home to the Episcopal seminary that gave College Point its name: the short-lived St. Paul’s College. Reverend William Augustus Muhlenberg, who in 1835 bought 134 acres for the college, which opened in 1839 and closed about 10 years later, founded it. William F. Chisholm, a former St. Paul’s student, married Mary Rogers, the niece of Reverend Muhlenberg, in 1848, and the young couple moved into a mansion on the grounds of the old school.

In 1930 the City of New York acquired the Chisholm mansion and its grounds for a public park, adding a new playground, football field, roller skating rink, baseball diamond, and picnic grounds. The popular park was known alternatively as Chisholm Park and College Point Shore Front Park.

Mayor Fiorello LaGuardia made the Chisholm mansion his summer City Hall in 1937, running the city from the shores of the East River in July and August. Several years later the old mansion was razed by his parks commissioner, Robert Moses—a flagpole now marks the site. In 1966 Mayor John V. Lindsay signed the law renaming the park for Hermon Atkins MacNeil. With its sweeping views of the Manhattan skyline, the Bronx, Rikers Island and the Whitestone Bridge, the park remains a popular spot with locals—who are still known to call it by its former name, Chisholm Park.

By the way, the homestead of the original founders of College Point, the Lawrence family, still exists. It has been moved to the Old Bethpage Village Restoration in Farmingdale, in Nassau County.