A View from New York Harbor

Contemplating the maritime past and future of a city, state and nation. 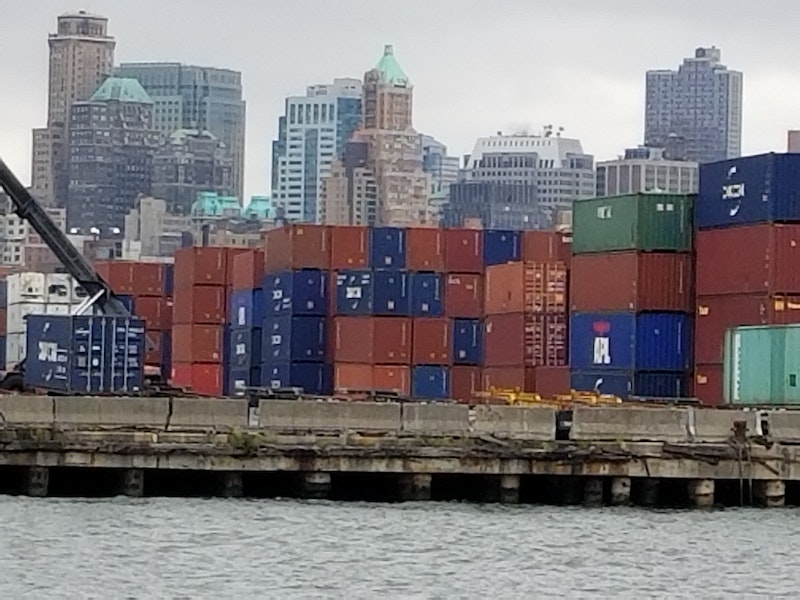 In mid-October, I drove to Staten Island, New York City’s “forgotten borough,” to attend the annual New York State Canal Conference, which, though usually held near the Erie Canal and other upstate canals, this year was dedicated to celebrating “One Water,” as the conference was called—the connectedness of upstate and the city via natural and artificial waterways.

The canal conference brings together professionals who work on canal-related projects in government or industry, and aficionados who love being on or near present or former canals. Canal enthusiasts are similar to railroad buffs but with an even more obscure and antiquarian interest. I’ve become one of them. In the course of writing a book about the Erie Canal, I took many trips from my home in northern New Jersey to upstate New York to see that canal in its historic and modern versions (today’s Erie, also known as the Barge Canal, is still operational).

Daniel Franklin Ward, one of the conference organizers, is an Erie Canal historian who was a valuable source for my book. He and folklore expert Naomi Sturm have been working on documenting and popularizing the maritime cultures of New York state. Ward, who’s based in Syracuse, wants people upstate and in New York City to recognize how interdependent they’ve been historically and remain today. It’s an uphill struggle in a state and country so divided into red and blue.

As part of my conference attendance, I went on a boat tour around New York Harbor, heading up toward Lady Liberty and Ellis Island, with Manhattan’s southern tip in the distance, then getting a close-up look at the industrial and post-industrial Brooklyn shoreline, before circling back to Staten Island.

The fact that I’d driven to Staten Island is significant. In a better world, there would’ve been more options for me to get there by boat, rather than just the Staten Island Ferry from Manhattan. Still, various ferries now crisscross the New York City area, part of a broader revitalization of the city’s waterfront over the past two decades. There are fewer places on New York’s shores that are entirely derelict now. But there are still many issues.

On Staten Island, for instance, there’s a political fight brewing between developers who want to build high-end residences on a section of the island’s shore, and activists who want parks and a maritime education center there. This kind of conflict has occurred elsewhere in the city and is sometimes resolved by a mixed approach (as when development is used to fund nearby parkland), but there’s only so much space to go around, so choices must be made.

In the 1990s, I wrote an article titled “The Wasted Waterfront” for the conservative magazine City Journal. I was a sympathizer of the developers; I called pro-park advocacy “open space absolutism” and efforts to save the old maritime industries “reactionary industrialism.” In retrospect, I should’ve given more weight to the concerns on which I’d put those labels.

For example, we’re going to need some of that “reactionary industrialism” to keep the country safe. A problem that has gotten attention lately is that the U.S. merchant marine fleet has declined drastically, with more and more cargo ships flying flags of other nations. That means less capacity to carry needed supplies in wartime. If someday we’re in an armed conflict with China or Russia on the open seas, real-estate agents will not protect us.

Climate change is another consideration. As water levels rise, having a lot of residences on the shoreline won’t be seen as a great idea. Parkland, in contrast, may be beneficial as a buffer that can be inundated with less harm. Canals could also play some role in limiting climate effects, as the ability to move water around and regulate its levels becomes more prized.

A guide on the boat tour pointed out that it’s the very rich and the very poor who tend to live closest to the water in New York City; the rich, because they can afford the high-end properties that offer water views; the poor, because much public housing was built on landfill and marginal areas near old industrial and maritime facilities.

The boat tour, as it happened, was a substitute for a planned conference session that had been cancelled; that session would’ve brought us inside Staten Island’s secluded ship graveyard, located on the island’s western edge on the Arthur Kill strait. Instead we watched some of a 2012 documentary about it, Graves of Arthur Kill, and listened to a talk by the filmmakers; but they eventually had been kicked out of there, and few are allowed in by the family owners.

I had wanted to write a “Letter from the Boneyard,” but it was not to be. I’m told that since that filming, the wrecked ships have sunk yet deeper into the muck, a world lost to us.