The Problem of Transgender Authoritarianism

Bullying people into a point of view is a poor long-term strategy. 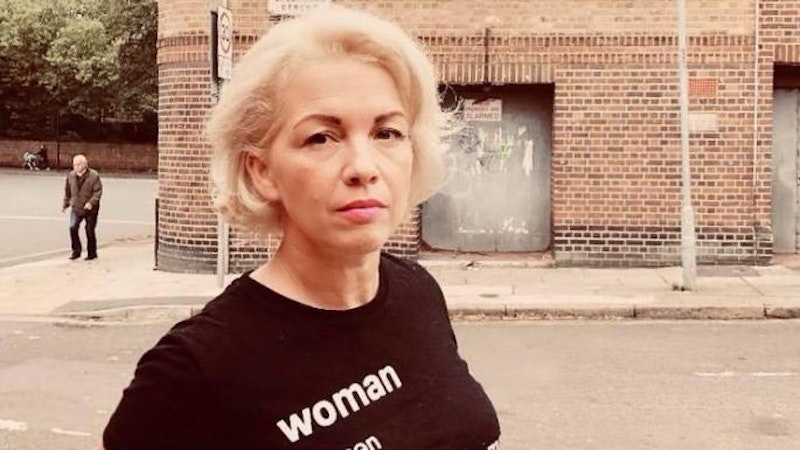 Feminist blogger Kellie-Jay Keen-Minshull raised £700 to put up a billboard in Liverpool with a message defining a “woman” as an “adult human female”—in other words, a person with two “x” chromosomes. As this is the biological, dictionary definition of a female, you might wonder why this would be remotely controversial. But Dr. Adrian Harrop, a male transgender activist, recently complained to the billboard company that the sign would make trans people feel “unsafe,” so they took it down. He doesn’t call the sign inaccurate, but believes it’s a dog whistle to transphobes.

Harrop’s concern is that the biological definition doesn’t include transgender women. He defines a woman as “a person who identifies as a woman,” and believes that the dictionary definition’s not “appropriate in a modern and progressive society.” Not being appropriate in the U.K. today often means it’s illegal, as evidenced by London mayor Sadiq Khan’s banning of an advertisement featuring a fit woman in a bikini, which he said he didn’t want his daughters seeing. In a televised debate, Harrop called Keen-Minshull transphobic and she called him misogynistic, signalling to viewers that they were about to talk over each other for the duration of their conversation, which featured a white man telling a woman that she doesn’t define “woman” appropriately.

Not accepting Harrop’s expanded, politically-driven definition of who qualifies as a woman marks you as a transphobe in a time when the spirit of blasphemy laws has been resurrected to prevent any dissent. The only politically correct opinion right now is that anyone who self-identifies as a woman is a woman, period.

But some feminists who are biological women don’t want to accept those who’ve renounced their masculinity into their all-girl club. Trans activists call these traditionalists "TERFs"—trans-exclusionary radical feminists. They then have to face no-platforming efforts and even rape threats.

Perhaps this billboard controversy marks the beginning of an era in the U.K. when the “old-fashioned” definition of a woman is erased from public discourse, either by law or social pressure, which is Orwellian. The fact that pressure’s applied to women by people who once identified as men—and still have a “y” chromosome—adds irony to the conflict. Is this once again a situation where men are dictating to women how they must think?

What’s striking is how quickly transgender people, who represent around seven-tenths of one percent of the population, gained the power to memory hole long-accepted ideas, redefine language, and place limits on what’s acceptable to believe and say about them. While the danger could be exaggerated by certain radical feminists who think of men as predators, plenty of women have legitimate concerns about sharing what have long been single-sex spaces—changing rooms, prisons, public restrooms, women-only colleges, rape crisis center—with male-bodied people. Assessing the risk posed by predatory non-transgender men who game the system to gain access to these spaces is essential to public safety, but the stridency of trans activists presents a barrier to the frank discussion necessary to evaluate the level of danger.

Only five years ago, women (and people in general) were allowed commonsense definitions of what a woman is. People’s thinking about gay people evolved gradually over time, to the point where even conservatives updated their opinions. This time around, it’s more like a new reality forced upon people who are going to get shamed if they don’t get onboard.

It’s radical to state that a man can become a woman overnight by simply making a few purchases at a woman’s clothing store and checking a box, but trans activists and their allies present the concept to the public as a fiat rather than a topic for reasoned debate. It wasn’t that long ago that liberal darling Barack Obama opposed gay marriage, which gay activists had been pushing for for many years. Now try to imagine a prominent Democratic politician bucking the quasi-religious transgender platform so boldly.

What trans activists argue—that gender defines an individual much more than the biological sex that’s “oppressively assigned at birth”—is actually antithetical to the longstanding feminist claim that, while the body is real, gender is socially constructed so as to pigeon-hole women and curtail their freedom. If you listen to trans activists define gender, what you often hear resembles stereotypes or sexist clichés.

Transgender activism has an authoritarian, censorious strain, and a history of threats and violence against dissenting women, who sometimes have to exit via the backdoor when they gather to express themselves. Under the trans activist Ministry of Truth, which demands total and instant acquiescence, the public’s not really allowed to think of Caitlyn Jenner as a man who dresses and feels like a woman, although many do have this feeling. But you’ll never know exactly how many embrace such heresy because expressing this doubt in public can get you hounded, harassed, or fired. And if Jenner actually is a “woman,” people aren’t given the freedom to arrive at this conclusion through the normal, lengthy process of intellectual give and take.

The Left has embraced both transgender activism and the concept of cultural appropriation, but it’s doubtful that it can see the inherent conflict this presents. When anyone can claim to be a woman and demand immediate acceptance, isn’t that a form of cultural appropriation that implies that women aren’t born with anything that gives them a particular claim to womanhood? Imagine a North American white man lecturing an American Indian woman on TV about how her definition of what an American Indian is is inappropriate. How would that go?