This year's men's lacrosse championship had plenty of disappointment for Hopkins fans, but that's all part of being a fan. 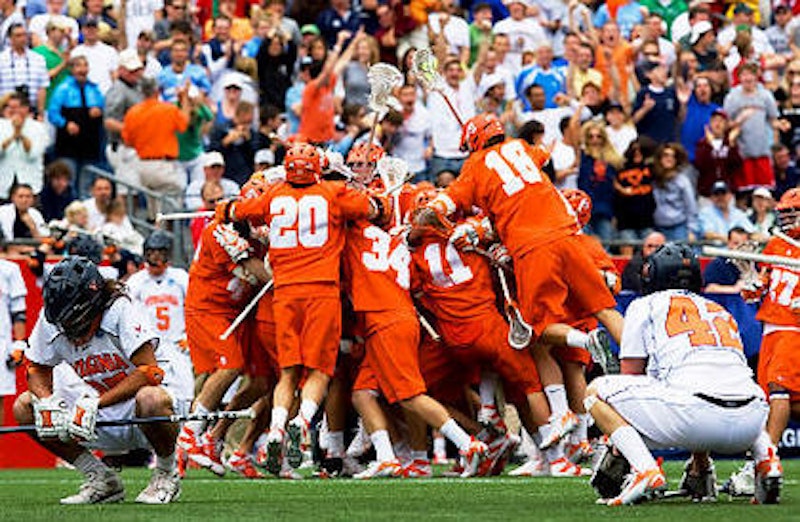 I wasn’t planning to make the trip to the NCAA Lacrosse Championships this year. It was too far (eight hours to Foxborough for me), too expensive (tickets were about 40 bucks and gas prices are still climbing), and truth be told, I didn’t think that my school, Johns Hopkins, was going to make it to the finals. Luckily, I was wrong, and by Sunday morning, I was on the New Jersey Turnpike, heading north.

The previous afternoon, I plopped down on the couch ready to enjoy a nice relaxing day of college lacrosse semi-finals on television. This idea also proved to be false. Halfway through the first game between Syracuse and Virginia I was up on my feet, pacing back and forth, tearing at my hair and shouting at the TV screen. This was a game that I didn’t even care about.

The Syracuse vs. Virginia game was one of the best lacrosse spectacles I’ve seen in a while. Both teams played with the burning intensity that defines playoff competition. Powerful offenses collided with iron wall defenses, resulting in an all-out brawl between two of the most talented teams in the country. Players sprinted, dove, cracked out massive hits, and ripped insanely fast shots, each effort matched in what became an ultimate stalemate which stretched into double overtime.

What made that game great was the evenness of competition. The Virginia squad was ranked higher and favored to win, but one could tell from the first quarter of play that Syracuse was not going to go down without a fight. With the game stuck in a grueling gridlock, it took something extra to earn the final goal. It took something extreme. Syracuse freshman Jovan Miller would be the one to deliver, ripping a wild leaping midair shot from the crease to send his team to the finals.

By then my adrenaline was pumping and I was ready to watch my Blue Jays fight what many considered to be a doomed battle against the powerhouse Duke squad. For the past two years, America (fueled by the media) has loved the poor Duke boys. Before their final four match-up, ESPN launched a tear-jerking mini-documentary covering the stripper scandal and the cancelled 2006 season, chock full of motivational interviews set to the background music of a sad violin score.

This set-up has pitted the Johns Hopkins team as the bad guys ever since their National Championship victory last season. After last year’s final, media coverage was focused more intensely on Duke losing than Hopkins winning. This year was no different. Just before the opening face-off, a commentator began the game with the words, “Will Hopkins end the dream again?”

Like the game before it, the Duke vs. Hopkins match-up was a brutal collision of titans. Each rally by one team was matched by another. Defenses held strong and offenses battled through the fray. In a game that everyone expected to be a blowout, it all came down to the final three seconds. After a timeout, Duke’s Matt Danowski had the ball behind the goal, his team trailing by a score of 10-9. He rushed in toward the center of the field, and with thousands of viewers holding their breath, he sliced a powerful shot on the goal. Deflected.

In a closing second play reminiscent of last year’s finals, Hopkins had denied Duke their goal of a National Championship for the second straight time. And once again, the media favored disappointment over glory. A Boston Globe headline the following day read something like, “Duke’s dreams crushed by pesky Jays.”

While television reporters scrambled for interviews with the disheartened Duke players and coaches, I was rushing upstairs to order my ticket and pack my bags. It was a game I couldn’t miss. Hopkins vs. Syracuse. Both teams, at the time, were tied at nine for the most National Championship wins of all time. It was to be a historic fight for the best team of all time, and I was going to be there no matter what it took.

Foxborough’s Gillette Stadium was packed with a record attendance of over 48,000 fans. Kids of all ages twirled their lacrosse sticks. College students painted their faces and chanted out loud. I even saw a man who had to have been over 60 years old donned in full Hopkins gear (including a cape) with his beard and what was left of his hair dyed a bright blue.

The sport that only a few years ago had fostered a small cult following had exploded into a massive event. The sun was shining, the field was set, and two teams who had previously been considered underdogs were ready to compete for their 10th National Championship.

The Syracuse squad was vicious, maintaining long offensive possessions and pounding the Hopkins defense relentlessly. For the first quarter, the D held strong, fueled by the stellar performance of sophomore goalie prodigy Mike Gvozden, and the offense managed to string together several well-executed plays to gain a lead.

However, the Jays fell apart fast. The defense, focusing on Syracuse’s star attackmen, were picked apart by the midfielders. Gvozden crumbled. The offense dropped balls, made stupid penalties and lost the intensity they had maintained throughout the playoffs. As a diehard New England Patriots fan, I know a choke when I see one.

If the Championship Blue Jays were to be compared to the Super Bowl Patriots, then senior midfielder Paul Rabil would be synonymous with wide receiver Wes Welker. Tallying six goals on the day, it was evident that Rabil was one of the only players who knew what it took to win. You could see his anger and his frustration in his playing style as he crashed through opponents, sprinted through double-teams, and ripped shot after brutal shot at the goal. It was the final game of his collegiate career and despite the final score, it was the best I had ever seen him play.

When the final whistle blew, Syracuse came out on top 13-10. As the team rushed the field and the sea of orange that filled the stadium roared, I could only stare blankly at the grass and wonder what it was that made me drive 400 miles to have my hopes crushed. I guess I just can’t help it. When you’re a fan, you travel those miles. You shell out the gas money. You deal with the disappointment, and every once in a while, you feel that rush of victory. And the best part about it all is, when you’re heading home and you have eight hours of open highway in front of you, you can always say to yourself, “Maybe next year.”