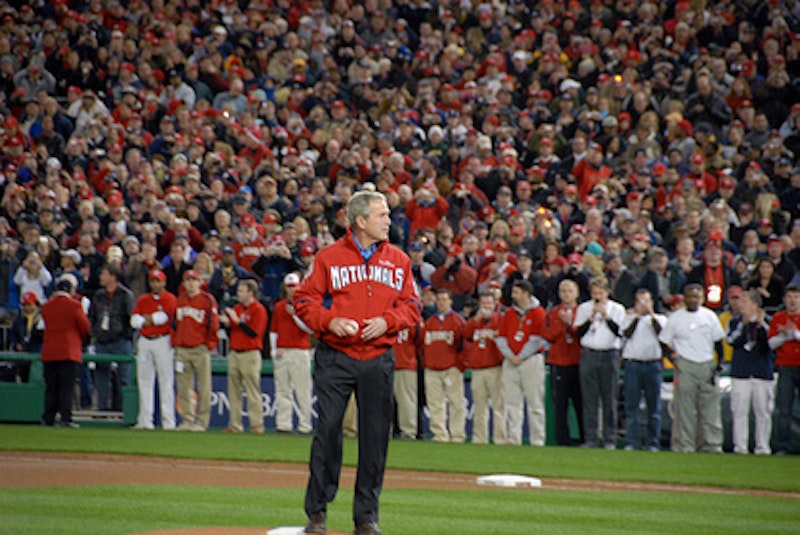 Say what you will, at least the guy likes baseball. Photo by jim.greenhill

Sunday morning,  I clicked on David Broder’s Washington Post op-ed, “More Debates Would Bolster Political Dialogue” and was pleasantly surprised by the content. Nothing against Broder, who through the decades has seemed like a fairly reasonable fellow, but his good-government opinions are usually kind of dull. A lot of substance, plenty of on-the-record quotes (and humility that toxic partisans like The New York Times’ Frank Rich might consider emulating) but dull. Nevertheless, the thrust of this particular Broder piece was on the money: while his colleagues were writing and re-writing Hillary Clinton speculation columns, lost in the shuffle was John McCain’s challenge to Barack Obama that they hold 10 town-hall meetings across the country and talk to voters and each other. Tim Russert, Sean Hannity and Chris Matthews would be invited only as spectators, and they’d probably decline due to the lack of attention.

Obama’s camp claims they’re considering the proposal but it’s doubtful they’ll accede to McCain’s wishes: the GOP nominee, lousy on camera in canned network-sanctioned debates, needs a curveball to alter the dynamics of the election, which clearly favor the Illinois senator. On the other hand, if Obama bats down the idea, his aura as the “candidate of change” might take a dent. The following is a pipedream, but what I think would really be radical in presidential politics is if the two of them met five times, before the national conventions, at different baseball stadiums in mutually-agreed upon cities. No press allowed, no photo-ops, just Obama and McCain sitting in a skybox, and taking in games, gabbing about baseball or whatever else comes to mind.

Every four years editorialists natter on about the importance of a “civil” campaign, and this is one way to further that goal. The two senators don’t know each other well, but as any baseball fan can tell you, during the course of a game two acquaintances can, in an isolated setting, forge a friendship while discussing and debating America’s favorite sport. After these three-hour—remaining for all nine innings would be a condition—I find it hard to believe they’d allow their strategists to embark on what could be the nastiest presidential race since, well, 2004.

Say the two of them started off this week in Detroit (possible swing-state of Michigan), watching the disappointing Tigers take on Ozzie Guillen’s rejuvenated White Sox. The current baseball topics would be endless: Chipper Jones’ astounding batting average (.420 as of Monday morning); the wisdom of Joba Chamberlain joining the Yanks starting rotation instead of inheriting Mariano Rivera’s role as a dominant closer; the introduction of limited replays on disputed home run calls by umps; how the Cubs are going to blow it again late in the season; and the ramifications of amateur pugilist Coco Crisp setting off a brawl last Thursday night by charging the mound after the Rays’ excellent starter James Shields plunked the Sox outfielder on the leg.

Baseball, as has not been observed by enough politicians and the journalists who cover them, is a cultural equalizer, a plain fact that both Obama and McCain ought to realize. Shysterball’s Craig Calcaterra made a good point in an email over the weekend that neither of the candidates  appear to be even mild baseball fans (unlike Rudy Giuliani and George Bush), and so they’d drift off to non-sports conversations, not unlike businessmen clogging up the good seats via corporate season tickets. But, at least by my reckoning, that’d be okay too, as long as they spent time together without the pressure of “gotcha” media dogs hounding them. Calcaterra wrote: “The bigger question: Could Obama name all the guys in the White Sox’s rotation, and could McCain name that of the D’Backs? I’ll admit that I’m leaning Obama, but if McCain knew who Micah Owings was, I’d have to think hard.”

That remark was made in jest, of course, but does address the very real tonic that a diversion like baseball (or sports generally) can have on friends who refrain from political debate because it just gets too incendiary. Calcaterra added: “In my own experience writing my blog, I’ve found that I can say the most outlandish, mean-spirited things possible about a baseball player or team, but the reaction to that pales compared to even the most innocuous political thoughts I insert into a post. Most folks I know would rather talk about baseball than politics, but in their heart they know one matters and one, ultimately, does not.”

David Pinto, who mans the go-to blog Baseball Musings, agrees that “people take politics more seriously than sports,” and though he’s got definite opinions about national affairs, he makes his forum a politics-free zone. As do other blogs, such as Joy of Sox, Allan Wood's  blog with a message at the top of his page that reads “Iraq War Resisters In Canada—Let Them Stay.” On the other side, there’s Mr. Baseball Crank, a diehard conservative who writes a lot about politics but at the top his homepage gives readers the option to hit the “Baseball-Only Content” option. On the left side of the site, there are three quotes, old chestnuts from Tug McGraw and Branch Rickey, sandwiched by a famous proclamation of Winston Churchill’s.

(A digression: I agree with a lot of people that the Yanks’ de facto boss, Hank Steinbrenner, is a loudmouth borderline lunatic, but he had a great, and withering, response to Johnny Damon’s complaint to the media that moving Joba to the starting rotation was a blunder worthy of his old man. The New Boss said: “I love Johnny Damon as a player and a person, and he’s doing a really good job now. But let’s be honest here, he’s not Branch Rickey. Johnny is a player, and as players, they all need to let the brain trust do the thinking and talking. They players just need to play and to worry about winning games.” Translated: You might be a millionaire, but your brain is the size of a peanut, so shut the fuck up.”)

When I attend a game with friends, politics is verboten, and I tell my McCain-backing 13-year-old to shut his yap on that subject and stick to balls and strikes and the menacing glare of Jonathan Papelbon. Last week, four of us went to Camden Yards to see the O’s and the Sox and the name Obama wasn’t mentioned once; instead two of the guys, confirmed Orioles partisans, looked forward to the day when the park wouldn’t be called “Fenway Park South” and Manny Ramirez might think twice before saying, as he did upon hitting his 500th homer there, that he was glad he could attain that feat “in front of my fans.”

Here’s an example of why I think McCain and Obama (and the electorate) might profit from the five-games plan proposed above. A buddy of mine in New York is close to Jonathan Tasini, the well-known union organizer in that state (he ran against Hillary Clinton in the ’06 Democratic senate primary) and though Tasini’s a Yanks fan, we’ve exchanged good-natured emails on baseball. Jonathan wrote the other day about the value of sports in today’s politically charged culture: “I’ve always been amazed at the reaction by too many people on the progressive/left side who have disdain for people like me who love sports as if it’s a waste of time. As a union member (particularly UAW), I’ve always thought that I can talk to just about anyone, anywhere, about sports. It’s an entry point and a bridge—not intentionally but naturally—no matter what people think about [political] issues.”

I can’t let this opportunity slip to throw in a few words about the Sox-Rays brawl last Thursday night. First, why Jon Lester was suspended for five games is beyond me: yes, he hit a couple of Rays but wasn’t ejected from the game. Two, Coco Crisp was spoiling for a fight and charging the mound after Shields intentionally hit him in the leg was overreaction; what I don’t understand is why Shields would retaliate against the Sox outfielder in the second inning, knowing he could be tossed. It resulted in the Rays’ bullpen being taxed and a loss in a game between the sudden rivals. A more seasoned pitcher, say Josh Beckett or Mike Mussina, would wait until later in the game to exact revenge and stick up for his teammates.

New York’s Daily News runs a terrific blog called Subway Squawkers, in which a Yanks fan (Lisa Swan) squares off against a Mets booster (Jon Lewin) in a good-natured back-and-forth. I can’t stand the Yanks, but Swan is an interesting read: last year, she lobbied for Joe Torre’s dismissal long before a lot of the beat writers, and in the past has defended Alex Rodriguez when no one else would. Last weekend, she skipped the Crisp/Shields/Gomes/Crawford/Casey pile-up and instead commented on the very weird dugout scuffle between Ramirez and Kevin Youkilis that occurred a few innings after the main event of the evening. Reportedly, Manny was pissed about Youkilis chucking stuff in the dugout after striking out on a disputed call and tempers flared. Not a big deal in my book; the Yankees of the late 70s hated each other (that means you, Mr. October) and were a lot more interesting than the bland team that dominated the last half of the 90s.

Swan wrote: “[W]hat I find fascinating is that Ramirez, who so often draws attention to himself by posing at home plate after a homer, decided to be the self-appointed enforcer on Youkilis. Mind you, I actually kind of like Manny [a huge and honest admission from someone who follows every inning of every Yanks game], but still. Why was a showboater like him the one to say something? Manny being the one to do it [instead of the more sober Mike Lowell] is like Paris Hilton telling Britney Spears to stop being a publicity hound.”

See what just happened? After opening up about politics I ran aground when thinking over the dozens of baseball dramas played out in the past week, which is why someone like Jonathan Tasini and me would never be seen at the same political rally but would have a delightful time at Yankee Stadium or any other park. And that’s why I think McCain and Obama would be smart to flummox the media and not play by its rules during this long general election campaign. Go to Coors Field, fellas, have a few drinks and get to know each other. It’s possible the country will be better off no matter who wins.