The National Pastime is Stronger Than Ever

Let the baseball whiners and chronic complainers switch to cricket if they’re so perturbed. 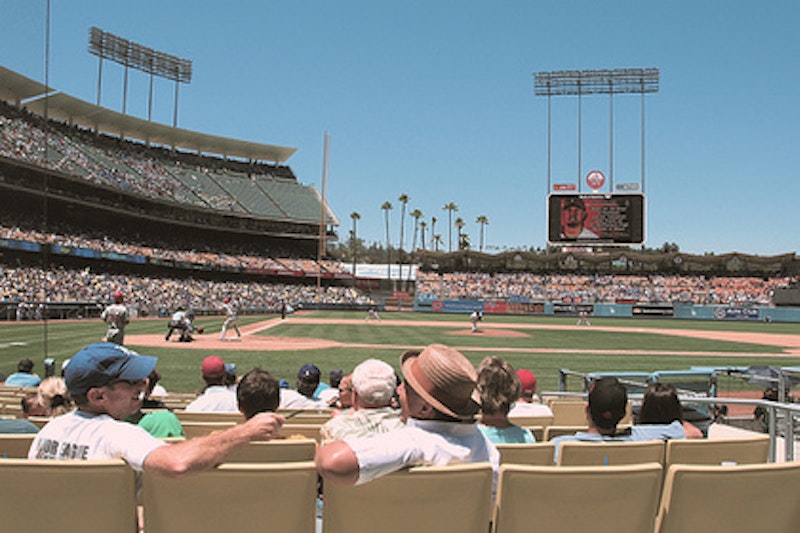 Memorial Day weekend is the one of the laziest times of the year, a mini-reprise of the black hole of time between Christmas and New Year’s Day, and if you’re a baseball fan it’s pretty perfect. More so this time around, since my in-laws Rudy and Daisy are visiting the family from Los Angeles, on a trip that’s sandwiching our homestead in Baltimore in between jam-packed itineraries in Washington and Manhattan. Rudy’s got a number of years on me—at M.I.T. in the late 50s he saw Ted Williams play at Fenway, which leaves one his grandsons, a Bosox booster like his dad, speechless—and it’s one of my great pleasures to watch games on the tube with him or, better yet, take in a contest at Camden Yards.

Rudy’s a lifelong White Sox fan—he got his long-awaited reward in ’05, even if Nellie Fox wasn’t on the team—but more than that, he’s an old-school baseball guy. The kind that still watches with pencil in hand, scoring a game with the (now) arcane symbols that my kids find nonsensical, gripes about bad rock music at stadiums and fireworks displays after home runs, an overabundance of “curtain calls,” and, it goes without saying, the slow pace of what is still, no arguments please, the national pastime. But he still loves the game. As someone who appreciates the time that Kevin Youkilis and David Ortiz, among other Sox, take at the plate, wearing out pitchers, I’m not really in a position to complain about three-and-a-half hour games (unless they’re on the West Coast), although I’ll admit that excessive pick-off attempts tend to drive me nuts. At some point, the pitcher just has to throw the damn ball to his catcher.

Anyway, as fans from three generations watched several games over the weekend, including seeing the Orioles wallop the Yanks from great upper-deck seats on Monday, the chatter was all baseball, with a particular emphasis on dumbo Commissioner Bud Selig’s newly enforced edict that umpires speed the game up. I think that umps might be better advised to work on a consistent strike zone and calling shortstops for the “phantom tags” of second base during double plays, but maybe they don’t get paid enough. It’s a point that’s been made repeatedly recently, so I’ll be brief on this one: the surfeit of television advertisements are more to blame for the sometimes lethargic pace than, say, Tony LaRussa (can someone get that dolt some new shades?) changing pitchers for every batter in the seventh and eighth innings.

The San Francisco Chronicle’s Ray Ratto captured an exquisite rant from Tigers manager Jim Leyland about Selig’s current hobbyhorse (which probably won’t last) over the weekend. Leyland: “Obviously (television) pays the bills, so you can’t fight city hall… I understand that… But if you’re really talking about it, it’s a lot of shit [Ratto used the word “detritus”]. I don’t think the fans really give a shit. If the Tigers win today, they don’t give a shit how long they stay here. If the Tigers lose, they’re going to leave early or be ticked off when they leave… My job is to try and win the game. I’m not on a time scale. We don’t have a clock, like football and basketball… That’s as simple as it is.”

We were also gabbing about one of my pet peeves about the sport today: the frequent visits to the DL (say hey, J.D. Drew) for minor aches and pains. I’m not a Derek Jeter fan at all—the awe he inspires not only from third-string ESPN broadcast teams as well as almost every other commentator is nauseating—but I do believe he’d conceal a busted finger just so he could suit up and play the game for which he’s getting paid about 20 million bucks every year. That led to a conversation about the scarcity of complete games by pitchers today, a real bugaboo among older fans and former players. Me too, although as Rudy and I eventually arrived at a mixed verdict. Obviously, today MLB teams have invested a lot of money in young talent and don’t want to get burned by shoulder injuries and recurring back spasms. So that makes business sense, even if it’s infuriating that pitch counts are so closely watched, even when a guy’s throwing a three-hitter and has a chance for a shutout.

It does seem inconceivable, by today’s standards, that great pitchers like Tom Seaver and Jim Palmer would end the year with a double-digit number of complete games, and that wasn’t deemed extraordinary. Seaver, in ’71, finished 21 games; Jack Morris was there from beginning to end 20 times in ’83; and Palmer went the distance a (now) astonishing 25 times in ’75. We needn’t even go back to guys like Warren Spahn. By comparison, the Blue Jays’ Roy Halladay, had nine completions in 2003, which gave him the reputation as a latter-day Ironman. In fact, as David Pinto wrote on his invaluable website baseballmusings.com on May 24, the Jays had back-to-back complete games last week, and Halladay’s five are more than the total of any other American League team.

On the other hand, when my son Booker and I riffle through a baseball card collection that dates back to the early 50s and, with a gap in the 70s, goes up to this year, it’s amazing to see how many players are lost to memory. “Who’s Greg Booker?” my son will ask, pointing to a card from ’86, and I’ll have no idea. Which got me thinking about how until recently so many players, after being groomed in high school, maybe college, and the minors, probably blew out their arms a few years into big-league careers and were tossed aside by owners and general managers. You gamble on a $5000 bonus signing and it’s no big deal: today, with upper echelon draft picks drawing an immediate million dollar check, no wonder there aren’t more complete games.

We also touched on the topic of fans booing—I have no problem with that, although I rarely indulge—while watching a great game between the Pale Hose and Angels on Sunday night. That morning, The New York Times’ Francis X. Clines had a very grumpy piece in the editorial columns complaining about what he perceived as a contemporary trend of fans expressing vocal displeasure at players on the team they’re ostensibly rooting for. I happen to think this is a load of baloney—catcalls, jeers, and drunken obscenities have been directed at the men on the field since I was a kid—but since this is the moralistic Times we’re considering, Clines’ crying in his beer is of a piece with the nonsense that’s usually printed in the paper’s editorial pages. He writes: “Such disloyalty [in this case, towards the Mets] is hard to witness, particularly as youngsters learn from Mom and Dad to condemn one of their own… Some trace this to a heightened demand for victory fed by the high price of ballgames, from tickets to programs [who even buys those anymore?] to popcorn. Others say Warhol solipsism has finally reached the bleachers, where bellowers compete to be seen and heard.”

Obnoxious booing isn’t attractive, especially when it comes from the section you’re sitting in, but it’s got nothing to with economics. I remember (and Clines probably does too) sitting in cheap Yankee Stadium seats in the early 60s and hearing Mickey Mantle—Mickey Mantle!—getting heckled.

Which brings me back to the original point here: baseball is continually evolving—once again, today’s PED brouhaha is yesterday’s cocaine scandal—and interest hasn’t diminished. As we were watching the Red Sox losing for the third time in a row against the A’s on Sunday, I predicted the outcome in the second inning, an instinctive reaction from a longtime Boston fan. Booker, a teenager, sort of set me straight: “Dad, it’s not 1986 anymore, so knock it off with the pessimism. The Red Sox have won two World Series in the past four years and since I wasn’t around to see Bucky Dent’s homer, I don’t have time for the doom and gloom.” It’s a valid point but old habits are hard to shake. And that makes for a lot of fun debates between baseball fans, whether you’re 70, 52 or 13.