The Giants will just have to wait out their star’s struggles. 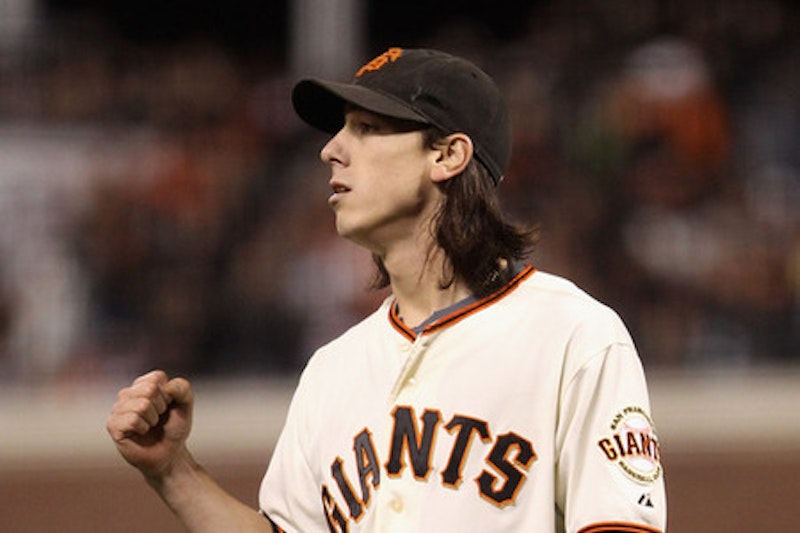 Tim Lincecum has just gotten worse. His bad start to the 2012 season has ballooned to an even worse first half. Most advanced sabermetrics suggest that Lincecum will regain form any day now, but it’s understandable for fans to be nervous: the small righty has pitched to a 6.19 ERA and allowed 4.79 walks per nine innings, all with diminishing fastball velocity. San Francisco’s manager Bruce Bochy intends to stick by the two-time Cy-Young winner, saying, “I have all the confidence in the world that he’s going to figure this out.”

The cause for Lincecum’s struggles can be partly boiled down to bad luck. Just a glance at his stat sheet reveals a shocking .330 BABiP, which is 30 points above the league average. Of the three factors that can influence a hurler’s BABiP (luck, defense, fluctuating skill level), two of them are out of his control. The Giants’ defense, however, while not amazing, ranks 11th in MLB with a 2.6 UZR/150. Other defensive metrics also rank them around that area. Clearly, they’re not the source of Lincecum’s problems. Bad luck is obviously a large factor (i.e. balls falling in the perfect places), but a drop in skill should be considered.

As noted above, Lincecum has experienced a widely publicized dip in velocity, which could be an indicator of a lack of offseason preparation or a more serious issue. A total adjustment back to the pitcher he once was isn’t out of the question, but he’ll have to fix the issues plaguing him, because according to Fangraphs, “Over the course of a season, players can go through periods of adjustment. Maybe a pitcher starts tipping one of their pitches, their mechanics are off, or they start leaving too many balls over the plate. Balls get hit harder until the pitcher makes the necessary adjustments, but until then, the harder a ball is struck, the more likely it is to fall in for a hit.” If the source of Lincecum’s problems really is just a lazy offseason, then fans should breathe a sigh of relief. With the season well underway, he is likely in pretty good shape physically and will only improve. Of course, nobody will ever know this for sure, as players don’t often advertise their lack of preparation.

The crazy amount of walks has me worried, though. Lincecum is no stranger to the base on balls, as his career BB/9 is 3.42. But compared to 2011, when he posted a disconcerting 3.57 BB/9, 2012 is a disaster. Not only does he lead the Giants with that awful statistic, he’s second in the NL, behind only Edinson Volquez. Thankfully for Giants fans, there are more good signs than bad ones. Lincecum’s K/9, at 9.70, is consistent with his career average. His 3.88 FIP, and 3.84 xFIP, also suggest that improvement is looming.

And until Lincecum works out his issues, whether they’re mechanical, luck driven, or at this point, even mental, Bochy and GM Brian Sabean are just going to have to grit their teeth and hope that he fixes whatever needs fixing.