A Night With the York Revolution

Reigning champions of the Atlantic League. 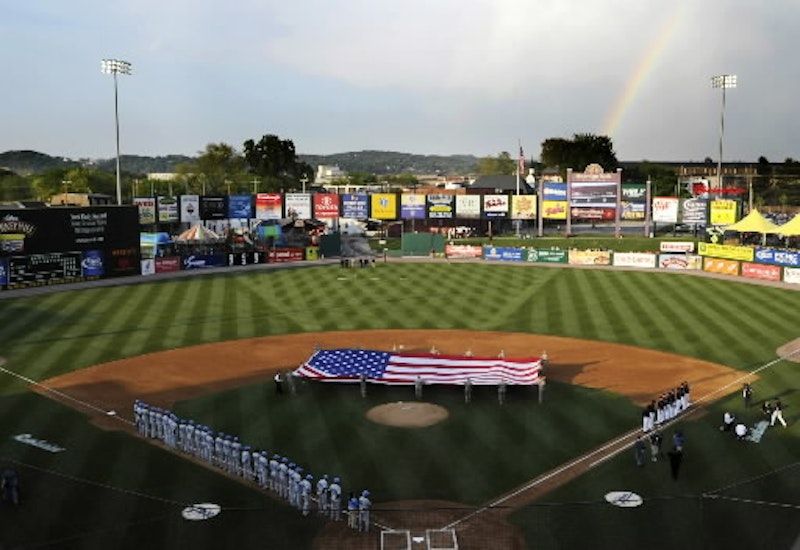 I took my kids to see the two-time defending Atlantic League Champion York Revolution two days ago. It was our first Revs game of the 2012 season. Wednesdays are traditionally “Pancake Wednesdays” in our home as my wife heads to work leaving the kids and me to stuff ourselves with pancakes and track down a playground or game of Connect 4. We had a great time at the park as always and took in a surprising pitching matchup along the way.

If you’ve never been to York’s Sovereign Bank Stadium, or “The Vault” as it’s known locally, you’re missing some great family entertainment value. The only complaint about the park is that there’s very little onsite parking so you have to pay $4 to park in an adjacent city lot. No worries, you’ll easily make up for those four bucks with the low concession prices once inside. The best part of “The Vault” is the huge playground just beyond the center field wall. It has the same set of inflatables and slides you’ll find in most minor league parks but the key is that the playing field is fully visible from the playground. You don’t have to go behind or under the stands to wait in line for the bounce house. The game is right there, unfolding in front of you. We grabbed some $2 dogs and a bag of peanuts and headed for our seats.

The typical Atlantic League roster has a couple of familiar names; ex-big leaguers, former first round picks, washed-out prospects. The most comically heart-breaking Revs game I can remember featured former Oriole Sidney Ponson starting for the Long Island Ducks with Matt Riley in the York bullpen. It was quite a sucker punch to this lifelong O’s fan.

Wednesday’s pitching duel featured a pair of former Major Leaguers. Shawn Hill, once of the Expos, Nationals, Padres and Blue Jays, took the rubber for the Revs. Hill started 44 games over six seasons for those clubs. His best season was in 2007 when he went 4-5 with a 3.42 ERA for Washington. At just 31, Hill is clearly pitching for another shot at the Majors. Opposing Hill was onetime Royals first round pick Dan Reichert. The Royals selected Reichert seventh overall in the 1997 draft and gave him a $1,450,000 signing bonus. He never lived up to the hype and after spending parts of five seasons with Kansas City and Toronto went to the minors never to return. Reichert is clearly just playing for the love of the game at this point. The 35-year-old is unlikely to get another shot at the Major Leagues.

We packed up and headed for home after six innings. It was already well past bedtime. When we got in the van I instinctively tuned the radio to check the score of the Orioles’ game. My five-year-old son asked, “Dad, can we listen to the Revolution game? We left before it was over and I want to make sure they win.” I’m happy to report that the good guys won 10-0. My hope is that Shawn Hill, having gotten another shot at the big time, won’t be on the roster the next time we head to the ballpark. Such is life in the Atlantic League.