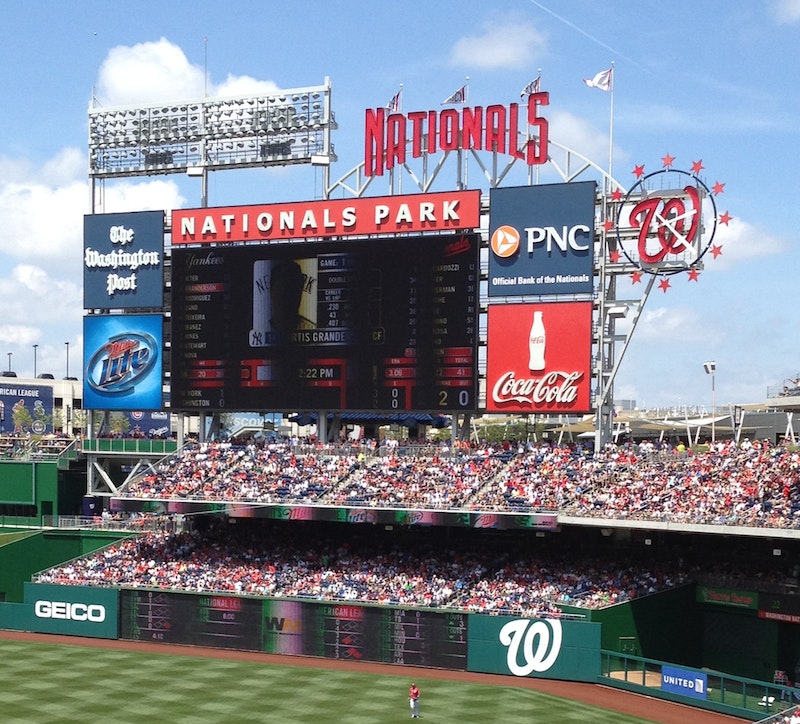 Let’s get one thing straight: I’m not a pink-hat Nats fan. Aside from little interest in National League teams—although I like the quicker pace of N.L. games, lack of DH’s and evidence that some big leaguers still know how to bunt—I’m a Red Sox partisan first, and Yankee-hater second. Period. That’s the way it’s been since I was a kid in the 1960s and suspect it’ll remain the same until Eternity comes knocking. If the Sox can’t make the World Series, then I’m most invested in the Yanks’ post-season failure.

Nevertheless, while the Bosox are in flux, trying (and not very successfully) to determine if they want to pursue a quixotic plan to contend this year or rebuild by trading or dumping their older players—I’m for the latter—it’s hard not to follow the audacious Washington Nationals and their upward trajectory toward N.L. dominance for years to come. I watch a lot of ballgames on television (via the Extra Innings package) and often tune into the Orioles and Nats’ broadcasts, when the Sox game is in between innings or not on yet. The O’s and Nats share the joint cable venture MASN (Baltimore owner Peter Angelos gets the lion’s share of the revenue, his ambulance-chasing attorney background gave him the upper hand in negotiating) and while the O’s play-by-play fellows, with the exception of Jim Palmer, are dreadful, their DC counterparts are a curious duo.

Bob Carpenter and J.P. Santangelo are unabashed homers, now reveling in the team’s current first place position in the N.L. East, but in fairness, in years past they’ve always acted as though the team was a contender, even when the infielders threw away balls at will and never managed to score many runs. It’s sort of infectious, this glass-half-full attitude; most broadcasters try to spin their team’s efforts in positive light, no matter how awful the baseball is, but none rival MASN’s Nats crew for sheer enthusiasm. I did find it kind of obnoxious a week or so ago when the Nats swept the Sox, and Santangelo kept repeating himself, admiring all the “curly W’s,” in evidence at Fenway Park, but then again I’ve been salty all season watching Boston play.

The Nats are setting themselves up as a dynasty-in-waiting, a ballsy “Natitude” that runs through the entire organization. What other team would call up the 19-year-old Bryce Harper from the minors so soon? And pitcher Stephen Strasburg became a Koufax-like sensation in 2010, before his requisite Tommy John surgery kept him on the sidelines last year. Now, Strasburg’s back, and is the most exciting pitcher since Pedro Martinez’s prime a decade ago, and with fellow starters Jordan Zimmerman and Gio Gonzales, this team can pitch.

Nationals Park, which opened in 2008 (the team, after relocating from Montreal, played in the dump known as RFK Stadium until then), is a monument to the future. The stadium reeks of hubris, and even though its seating capacity is today’s norm of about 41,500, it feels much larger; in contrast, the O’s now-classic Camden Yards, which holds (but doesn’t attract) more spectators, feels like a college venue compared to Nationals Park. It’s not just the Third Reich-like scoreboard that has the team’s name in gigantic letters, but also the hectic pace around the park, with more concession stands than I think I’ve seen anywhere else, and Nats’ logos everywhere.

It extends to the public broadcaster who announces Nats players when they come to bat: unlike the understated cadences of the late Yanks’ p.a. man Bob Sheppard, this character acts like he’s the emcee of an extreme sport event. So, it’s not Steve Lombardozzi who’s leading off for the Nats, it’s STEEEEEVVVE LOMBARDOZZZZZZZZI!

Three of us went to see the Nats play the Yanks on Father’s Day and it was a lousy afternoon for the home team, as the Evil Empire completed a three-game sweep, winning 4-1 behind the pitching the Ivan Nova, and some sloppy Nats defense, pitching and anemic offense. The broadcasters were indefatigable, though: hitting the john during the fifth inning, where the MASN feed is playing, I heard one of them say, “The Nats just aren’t catching any breaks this weekend, every call is going to the Yankees.” In fairness, Carpenter and Santangelo did acknowledge the A.L. East leader’s ability to wear out Nats pitchers and take advantage of miscues, but they weren’t happy about it.

Obnoxious? Absolutely. And when defensively-challenged first baseman Adam LaRoche (who does have some pop in his bat) told a reporter later about the weekend series, “It’s about as close to a playoff atmosphere as you’re going to get,” I shook my head, chuckling yet another example of “Natitude,” since, really, it’s June and both teams could tumble in the standings.

What I like about the Nats, in contrast to the Yanks—whose promotion of the team’s “class” is downright offensive (any team run by Steinbrenners and employ Alex Rodriguez can’t possibly have “class”)—is their joyous embrace of being the nouveau riche team in the Majors, with no apologies. And yes, I’d love to see Washington in the World Series this year—against any A.L. team aside from the Yankees.