Don't count them out yet. 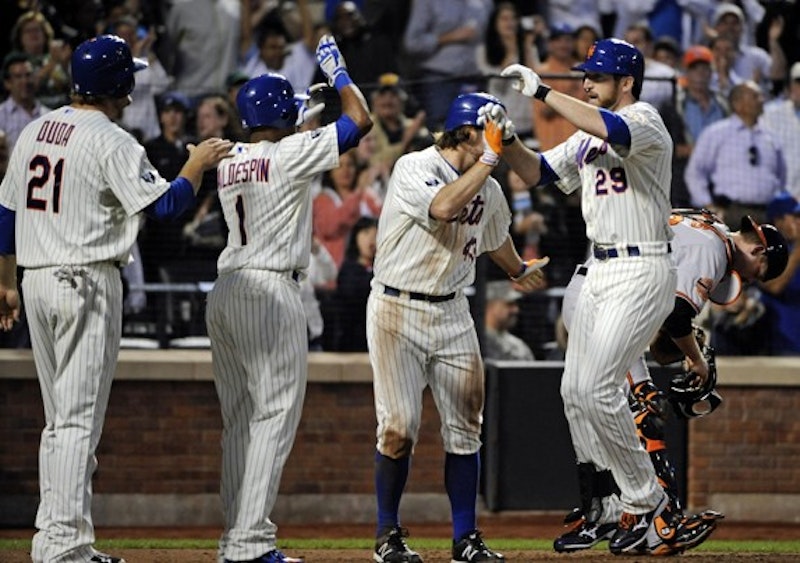 It wasn't too long ago that the New York Mets were a baseball punchline. They went from a team that was consistently overpriced and underperformed to a team in financial disarray. The financial issues and fallout from the Bernie Madoff scandal and its effect on the Mets will take years to sort out. As for the product on the field this season, the Mets are a surprisingly competitive and scrappy bunch.

The Mets took three straight from the Baltimore Orioles this week. On most nights New York runs out a lineup that more closely resembles the New Britain Rock Cats. Lucas Duda, Jordany Valdespin, Mike Baxter, Andres Torres; who are these guys? They may not be household names but their contributions have the Mets just 3.5 games back of the first place Washington Nationals in the National League East.

Duda leads the club in home runs after posting a solid rookie season in 2011. Scott Hairston has bounced around the Majors for the past few years and Mets fans are no doubt thrilled he bounced over to Queens. The veteran outfielder is second on the club with nine home runs and has posted a .906 OPS in 134 at bats. David Wright has returned from an injury-marred 2011 season to re-establish himself as the Mets' best player. The 29-year-old Wright is having his best season with eight home runs, 39 RBI, a .358 batting average, and 1.027 OPS in 66 games.

The key to the Mets' resurgence has been the return of Johan Santana and the emergence of knuckleball wizard R.A. Dickey. Santana missed all of the 2011 season and part of the 2010 season after having surgery to repair his left anterior shoulder capsule. Santana has bounced back from the career-threatening injury with a vengeance. He's returned to the form that prompted New York to send four prospects to Minnesota to acquire him in 2008. Santana is under contract for 2013 at a salary of $25.5 million. New York holds a $25 million option on the veteran lefty for 2014.

Dickey has been an absolute revelation in the first few months of the 2012 season. Dickey was at one time considered a top prospect in the Texas Rangers organization, but spent nearly seven seasons in Triple-A before establishing himself as a big leaguer after learning to throw a knuckleball. New York signed Dickey in 2010. He posted solid season in 2010 and 2011 before becoming baseball's best pitcher in 2012. Dickey, now 37, is 11-1 with a 2.00 ERA in 14 starts. He’s walked just 21 batters in 99 innings and sports a 0.89 WHIP; remarkable stats for a knuckleballer.

The Orioles found out this week that the Mets, backed by the stellar duo of Dickey and Santana, could be serious contenders. The Mets' lineup won't strike fear into the hearts of opposing pitchers but New York could ride the red-hot Dickey and Santana right into September. The Mets' financial issues make it unlikely they’ll add any significant pieces at the trade deadline. Mets fans have to hope that Jason Bay, currently on the DL after suffering a concussion in a collision with the outfield wall last week, returns and starts earning his $16 million salary. Bay was hitting just .187 with four home runs in 22 games prior to his injury.