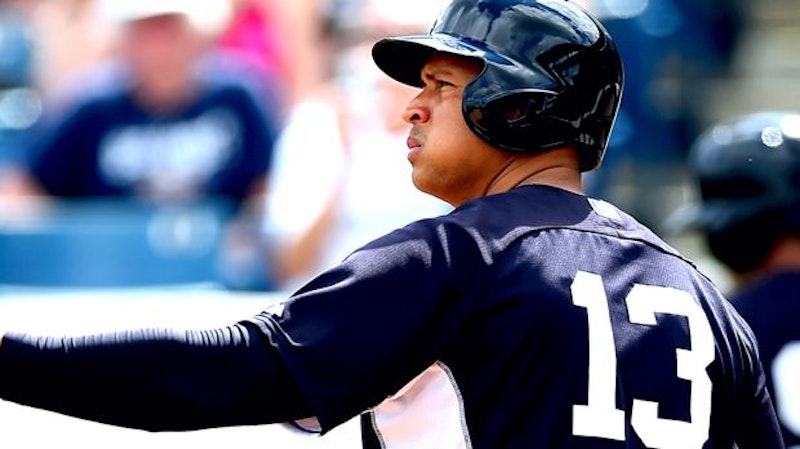 Every supervillain needs an origin story, something to explain their unerring evil, their need for vengeance. Magneto orphaned and discriminated against for his mutant status. Two-Face served as the district attorney of Gotham City before a vat full of acid disfigured his face and fried his brain. Alex Rodriguez was vilified in the media, criticized by his employer, and suspended from his job for committing a crime nearly every one of his contemporaries is guilty of. Now the New York Yankees want to wiggle themselves out of the “Home Run Milestone” bonuses they promised him. It’s a chintzy move being played off as a quest for justice: Why should this fraud be rewarded for cheating? Were any of those home runs legit?

I don’t care: I’m rooting for this supervillain—at least in an abstract sense (I’m a Red Sox fan). Why does every PED controversy need a scapegoat? Like Barry Bonds and Roger Clemens before him, Rodriguez’s punishments—both from MLB and the media—are disproportionate with those of his contemporaries. Ervin Santana and Jenrry Mejía were suspended for PED use last week, yet both stories, for the most part, flew under public perception. Does Rodriguez get special treatment because of his fame? Or is it his former superstar status?

A-Rod doesn’t care anymore—about anything. Not his team, the fans, or the sport. Sure, he’s been nice recently, placating the reporters, saying he just wants to play the game. But that’s not what A-Rod wants: he wants revenge. A-Rod wants to reclaim the idolatry of Yankee faithful, only to turn his back on them once he receives it. He wants the respect of ESPN analysts just so he can point out their hypocrisy. He wants that Mile Stone money, just so he can buy another couple mansions to hold all his evil laughter. I support this.

PEDs are often treated with a holier-than-thou pretension that belies the context of the issue. Baseball is a meritocracy, so on-field success is the most important aspect of the game. Players don’t get paid for having strong moral codes. How can you stay clean when the vast majority of your peers are juicing (and yes, I do suspect the vast majority of current baseball players have used PEDs of some sort)? With so much money on the line, why wouldn’t you use PEDs?

A-Rod, I’m on your side. Show these traditionalists that old baseball is dead, and that the new era is going to be filled with chemicals, whether they like it or not.