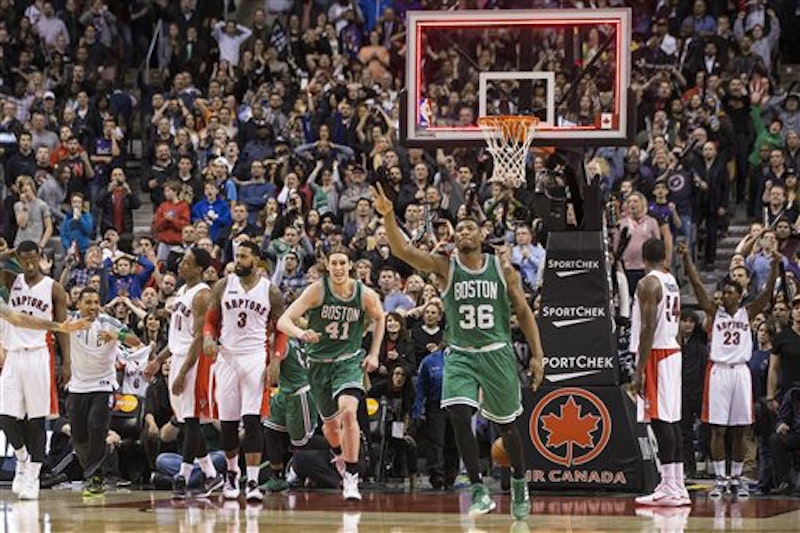 As NBA teams play their last of the 82-game season, the Western Conference standings are a mess. Every team other the Golden State Warriors is floating in a blender, which pulses nightly. The healthiest and the hottest teams rise to the top. Welcome to the 2nd seed, San Antonio Spurs. Welcome to the 5th seed, Memphis Grizzlies. The playoff match-ups refuse to be determined. Let's switch over to the Eastern Conference, where things might not be as glamorous, but they make a bit more sense.

The Boston Celtics (39-42) have enjoyed themselves since the All-Star Break (19-11; 19-9 in last 28). Coach Brad Stevens has the team buying in to the wise Buddhist (and sporting) philosophy to stay in the present moment, rather than get ahead of themselves and overanalyze their success. The hunger this group plays with is palpable. Refreshing to see a collection of undervalued players pull together in only a few weeks. As GM Danny Ainge explained on Tuesday night’s broadcast, the new-look team has barely had practice time together since the All-Star break, and the cohesion is remarkable. The flurry of mid-season trades is in the rearview, and the Celtics have cemented their collective identity. Start with guards Marcus Smart and Avery Bradley. Toss in the constant-motion and physicality of Jae Crowder and Jonas Jerebko. Finish it with the mighty-might offensive force of Isaiah Thomas (no relation to the Pistons legend), and you get a team that refuses to be denied.

Goodness, even typing that feels absurd. This was a 20-33 team, floating tepidly along until the roster churn finally stopped, and they found themselves with Isaiah at the point, and some decent shooting (Jerebko and occasionally Bradley or Olynyk) nearby. The team started playing feisty defense and stopped turning the ball over, thanks in large part to Evan Turner's surprisingly steady hand. They weathered the storm when Thomas went down with a back injury. Fast-forward a few weeks, and with two games left, they've won six of their last seven. They've had the leprechaun back on their side, facing a resting Cavs team (Kyrie missed both, LeBron played one half out of the two games).

Many outside observers wondered why the team wanted to make a playoff push. The question: would you rather have a sliver of a chance at a top 3 pick or continue an attempt at restoring a culture of winning among your very young team? In the Eastern Conference, a team on the rise can rise rapidly (Washington Wizards last year). All teams won't put their fans through what Sam Hinkie has done to his Sixers faithful (how faithful can they be at this point?) and expect long-term success. Rebuilding is always an experiment, so why not rebuild on the fly when you've already got an abundance of youth on the roster?

Boston matches up better with Atlanta (who may be dealing with a dinged-up Millsap) than they do with the offensive juggernaut that is the Cleveland Cavs. The Cavs (52-39) will likely finish off Boston within six games, if I’m allowed green-tinted optimism. The reductive folks with no rooting interest in Boston will say that winning one or two playoff games is useless in the big picture, but what they fail to recognize is the importance of playing games 65 through 82 on the regular season schedule as well. By beating out the meager Hornets, the deflating Nets (sans Pierce and Garnett), and the Bosh-less Heat, the Celtics youth brigade has undoubtedly gained confidence and experience. One or two potential playoff wins in a series will be the icing on the development cake. I guess if the Cavaliers sweep the Celtics, blowing them out several times that might not taste like some delicious icing, but I'm betting the series won’t end in disaster for Brad Stevens' club.