Losing Is A Disease 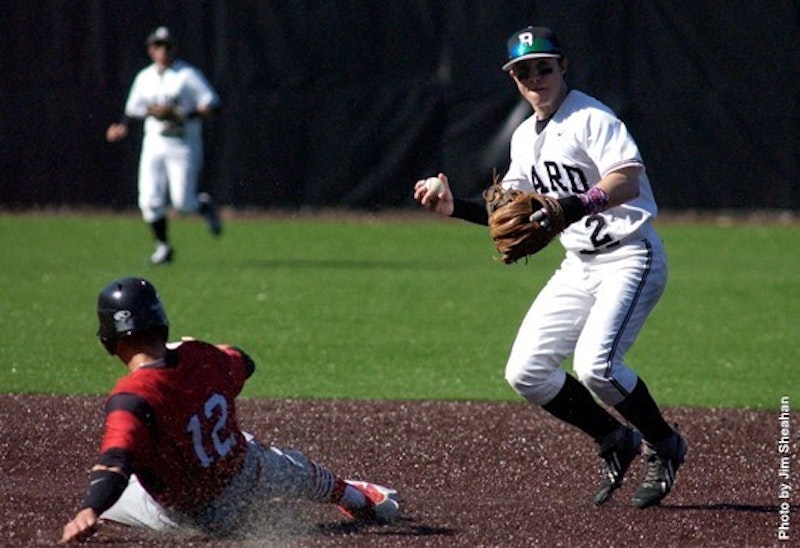 It was another character-building lost weekend for the Bard College baseball team. Finally they got some nice weather for a Sunday doubleheader against Rensselaer Polytechnic Institute on the fresh new NextTurf of Honey Field, a $2.6 million diamond tucked away on the Annandale campus. The militant eggheads of the entrenched Bard academia have denounced the tiny liberal arts school’s nascent “sports” emphasis embodied by the construction of the new ballpark. So far during this infant spring local high school teams and even Mariano Rivera’s son (Iona played Marist at Bard due to crappy field conditions in Poughkeepsie) have used the diamond for game action. There were about 90 fans and a few dogs on hand for Sunday’s twinbill, more than half of them traveling down from Troy to loudly support the RPI Engineers.

Watching baseball at Bard is a Hudson Valley idyll worthy of a Frederic Church canvas. The outfield fence banners declare “Bard College Baseball” in left and “Home of the Raptors” in with the birdhead logo in right. Drifting overhead effortlessly at 120 feet are several chicken hawks and plying his craft in right field is a kid named Jack Hawke, a sophomore from Rumson, NJ. The lads are in crisp wedding cake white Nike uniforms and are no longer a vagabond team playing home games at various rented venues throughout Dutchess and Ulster counties as they did last season. Cozy Honey Field is skirted by very tall trees and gorges behind the field, the admissions office cottage looms well deep in foul territory behind the backstop and the campus photography studio, home to famous Vietnamese photographer An-My Le, is way beyond the right field wall next to the punk rock student music venue called Smog.

The 3-20 Raptors (1-17 in conference play) are near the bottom of the Liberty League mosh pit and have been napalmed into submission, just to mix the punk rock and Vietnam metaphors. Their season is winding down with only Skidmore beneath them in the standings, and, as usual for a Bard athletic entity, the promotional umbrella is soaked with disappointment. You can see it on the face of the Bard star player Alec Montecalvo. He’s a junior from Naples, FL, and he’s very much alone. I stood a few feet away from Bard head coach Ed Kahovec as his team had a rare two-inning lead against RPI.  He’s got a certain youthful William H. Macy quality about him, a jock version who doesn’t go all Mamet on the umpires.

The Raptors were up 1-0 on a double steal/rundown combo in fourth. Bard righthander Steve Marotta of Harrington Park, NJ, was inducing multiple routine grounders from RPI batters, and being the first game of a twinbill there were only seven innings to play. Before Bard could get a whiff of victory and the six-foot sub between-game meal, RPI put up back-to-back two-spots in the fifth and sixth innings and took a 4-1 lead into the seventh. That’s when the studious Bard baseballers did their finest Mary Shelley impression and came to life, making it 4-3 with some clutch/lucky opposite field hits. The tying run was on base when freshman David Schlosser, a Canadian, battled RPI reliever Steven Schiavone of White Plains, NY. Schlosser worked the count full and with the crowd on its feet, he then grounded out to third to end the game, leaving the bearded Montecalvo disconsolate in the on-deck circle. Things would only get worse for Alec as he had to pitch the second game in the afternoon when RPI clobbered the Raptors 13-0, completing back-to-back doubleheader sweeps as the two teams had squared off with similar results up in the Albany suburbs the day before.

Despite the despair, it was a pleasant sunny Sunday—and there was some energy at the ballyard when Bard was threatening late in the first game. Kahovec’s got his kids fired up and still confident, but the roster size is still worrisome. RPI, coached for the past 30 years by Karl Steffen the former Yankee farmhand hurler from the late 1970s, showed up in Annandale with roughly 40 student-athletes, doubling up the 19-man Raptor team. The Bard bullpen is always empty because they don’t have enough players to stock the bullpen bench, let alone the spacious new dugout.

The Honey Field spectators are on a learning curve of sorts. As RPI turned a routine 4-6-3 double play, a student in the bleachers yelled “Hey, he was off the base!” with no one nearby to explain baseball’s ancient “neighborhood” play. I was also struck by the creeping presence of Attention Deficit Disorder among the youngsters on the field. The coaches call pitches from the dugout and the catchers see them and have to check a Tom Brady-style pitch menu woven into their big glove hand wristband. One RPI batter in a bunt situation stepped out to check signs from the third base coach, received them and then reached into his rear pocket to produce a piece of paper he checked to determine his course of action at the plate. You think you’ve seen everything, and suddenly there is a paper trail in the baseball game.

Last spring I had a pair of young taxi passengers who’d come down from RPI on Amtrak to visit a friend at Bard. We hit the campus at mid-day on a sunny Friday, and the 80/20 female to male ratio was very much in evidence in some very short skirts. “This place is heaven,” said one of the Engineers. “RPI is almost all dudes.”

Well at least Bard has that going for it. Which is nice.