Time for Orioles' Markakis To Put Up or Shut Up

Buck Showalter has some decisions to make. 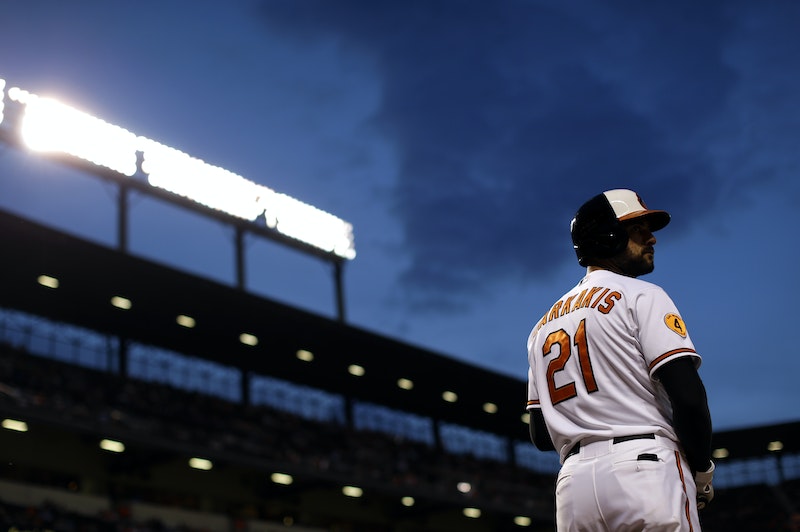 Baltimore’s right fielder Nick Markakis made some headlines with his outspoken stance on PED users in the wake of Monday’s Biogenesis related suspensions. It’s the first time the outfielder has received attention in quite some time as he’s mired in the worst offensive season of his career. The 29-year-old Markakis was the face of the Orioles for many seasons but over the past few months has become a lineup burden as players like Chris Davis, Adam Jones, and Manny Machado have emerged as offensive catalysts.

In his comments on Monday to The Baltimore Sun, Markakis suggested that PED users were “stealing money,” an odd perspective from someone making $15 million and producing a .713 OPS. Markakis has every right to be upset about the Biogenesis situation, and as an established veteran his tone could signal a welcome shift by the MLBPA in regards to PED use, but people slugging .311 against lefties should probably ratchet down the “stealing money” rhetoric.

The strangest thing about the struggles of Markakis is that Orioles’ manager Buck Showalter appears unfazed. Showalter hasn’t dropped Markakis from his customary third spot in the lineup and still shifts Markakis to leadoff against lefties. Hitting between All Stars Manny Machado and Adam Jones, the scuffling Markakis has produced two extra base hits and three RBIs since June 28. That level of output would embarrass Ryan Flaherty.

The time for Showalter to shuffle his lineup is long overdue. I don’t take issue with many of Showalter’s decisions but the insistence on playing Markakis every day, either out of deference to his seniority or his bloated salary, is hurting the on-field product. The time has come for Markakis to be dropped down in the lineup and perhaps start sitting against left-handers. Nate McLouth, the club’s leadoff hitter against right-handers, has significantly outperformed Markakis against lefties this season (.722 OPS vs. .620 OPS). The problem is only exacerbated when you realize that Markakis has nearly twice as many at-bats against southpaws as McLouth. Markakis is still productive against righties but his widening platoon splits suggest that the Orioles will be paying $32 million over the next two seasons to a platoon right fielder.

It’s possible that Markakis is still dealing with the lingering effects of the thumb injury that sidelined him last September and October. It’s possible that he’s dealing with some unidentified personal issue that Showalter won’t publicly divulge. It’s also possible that he peaked early and is simply in the decline phase of his career. The Orioles are no doubt hopeful that Markakis is simply in a funk but the ballclub can no longer simply wait for him to rebound. Baltimore is in a dogfight with Texas, Cleveland, and Kansas City for the last Wild Card sport. Showalter should drop Markakis to the seventh spot and start sitting him in favor of Steve Pearce against some lefties. While he’s at it, Buck should go ahead and move Chris Davis into the three-hole to give him some real protection. Matt Wieters and his .708 OPS aren’t getting it done.

The real shame is that last summer’s thumb injury robbed Markakis of his chance to finally play in the postseason. After years of being the best player on a terrible team Markakis was a good player on a really good team in 2012. Markakis sat in the dugout as his teammates battled the Yankees and Rangers in the playoffs. His presence in the lineup may have turned the tide in the ALDS versus New York. If Markakis doesn’t heat up soon and start providing some punch for the O’s he may miss another chance to play in October.