Sour grapes as the Red Sox take two of three from their nemesis. 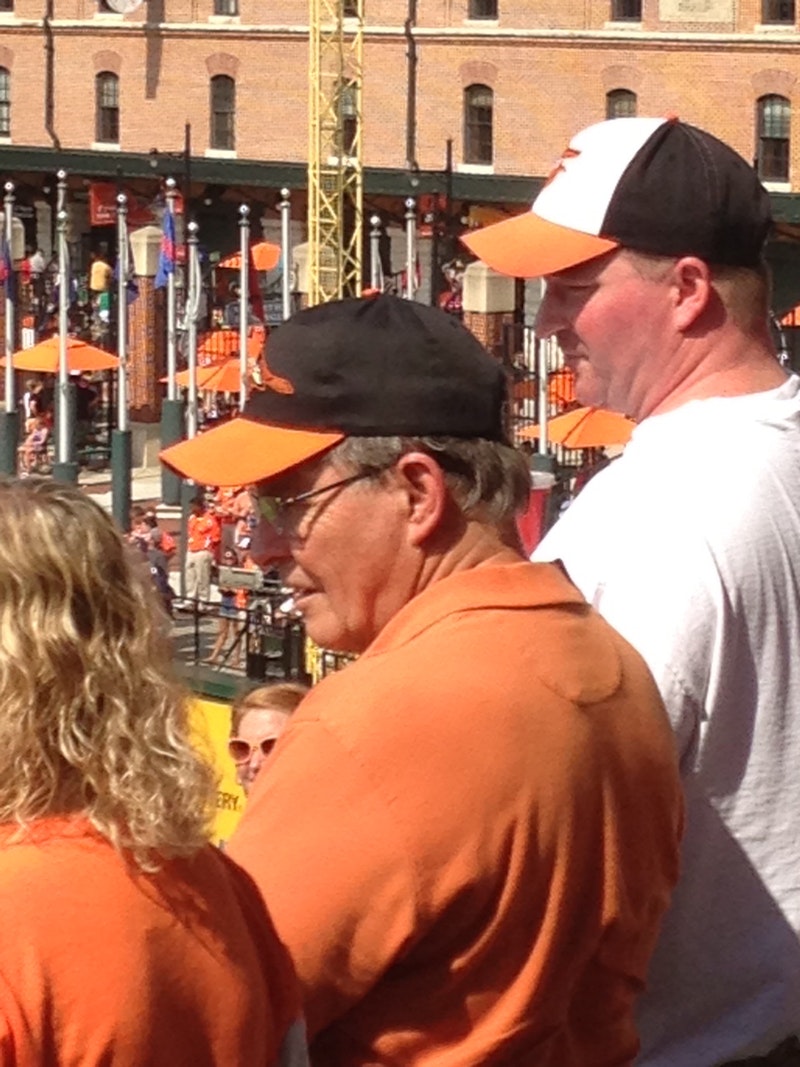 At the grand ballpark once known as Fenway South on Sunday afternoon I was nearly alone in giving Red Sox slugger/New England teddy bear David Ortiz a standing ovation every time he stepped up to the batter’s box. The Orioles’ Camden Yards is awash in Birds’ orange these days, a welcome turnaround from just three years ago when the team was the doormat of the American League East. Used to be that when you were taking a leak or getting a bag of peanuts, and a huge roar vibrated throughout the stadium, it was assuredly bad news for the home team. As a Sox fan who’s lived in Baltimore City for the past 10 years I always found it a little embarrassing when Boston or New York partisans took over the park; a winning team (like the Ravens, and now the O’s) is a source of civic pride, and provides a huge uptick in small business revenues, and despite ambulance chaser Peter Angelos, the franchise’s aging owner, the Birds are back in business. And I hope the club makes the playoffs, and are then eliminated by the Sox.

As everyone who follows baseball knows—unless they’re caught up in the absurd PED drama dripping out of vengeful MLB Commissioner Bud Selig’s office every day—on Saturday night, Ortiz, upset at a botched strike call by home plate ump Tim Timmons, returned to the dugout and smashed a phone to smithereens, providing talking points for those who either don’t like Big Papi or the Red Sox in general. I was watching that game on the tube—the Orioles’ network MASN had Jim Hunter (nearly as insufferable as the baseball-impaired Gary Thorne) and Mike Bordick (a decent analyst, even if he pronounces “really” as “rillllyyy”) and Hunter was indignant at the Ortiz outburst. I found it quite entertaining—especially since Boston’s de facto captain Dustin Pedroia wasn’t harmed by the bat’s shards—and though it wasn’t nearly as thrilling as an old-fashioned on-field brawl or pitcher’s routine brushbacks and hit batters (those were the days, eh, Bob Gibson?), the spectacle, coupled with a Sox win, made for excellent viewing.

Anyway, the family and I were settled in Section 216 on the first base side on July 28, and when Ortiz came to the plate for the first time there were thunderous cries of “’Roid Rage!” from the O’s fans, alluding not only to the broken phone, but the DH’s murky PED allegations in past years. My acknowledgement of Big Papi was, in contrast to years past—“pure” baseball fans have always mocked the larger-than-life Ortiz’s “styling” after he belts a homer—was met with disgust from the O’s fans surrounding me. Not really nasty—and I was surprised at the relatively small crowd of a 32,891 on a gorgeous July afternoon—at least not on a Yankee Stadium level, but feistier than usual. When Ortiz went bridge in the third inning, a lot of the huffing and puffing was silenced. The Sox went on to win 5-0, and coupled with a rare Yankees win the over the Rays, reclaimed first place, at least temporarily.

As I’ve noted before, I’m in favor of legalizing all substances for players; one, it’s a fool’s errand for the sclerotic MLB brass to keep up with the newest pharmaceuticals; and two, what an athlete injects, snorts, rubs or swallows to get an “edge,” is up to the person. They’re old enough to weigh the risk of instant gratification vs. the real possibility that one day, maybe even a few years from now, they’ll wake up with three eyeballs and the inability to walk.

Has Ortiz “used” in the past? The smart money says yes, but he’s hardly alone. (A close second to a Sox World Series win this fall would be the revelation that Derek Jeter had a “little help” during his infuriating Hall of Fame career.) Big Papi, for all his dramatics, generally gets a pass, mainly because he’s MLB’s unofficial ambassador, a guy who hugs opposing players—which bugs me—and opens his wallet wide for any number of charities. (Dominican players, most of whom grew up dirt-poor, give away a lot more money than their American counterparts.)

Thanks to social media and the proliferation of baseball websites, it feels like late-September rather than the end of July, as the bunched-up AL East (and NL Central and NL West) are scrutinized pitch-by-pitch as if it were 1967 and four teams had the opportunity to win the American League pennant on the last day of the season. Hey, I’m guilty, too: during Sox games I text with a buddy, and it can go from “Napoli sucks!” to “Napoli delivers!” in the space of a minute. Following Twitter last week, where erroneous reports of Chicago’s Alex Rios getting dealt to the Pirates were rat-a-tat-tat posted—done deal!—I reported it to my son when he got home from work. He immediately checked out the MLB Trade Rumors site and found it was all wet, then chastised me for following the hasty bleatings on Twitter.

It is all a bit ridiculous, but sure is preferable to when I was kid, living on Long Island and the only ballgames I could watch were the Yanks and Mets, and had to listen to the radio the next morning to see how the Sox fared.