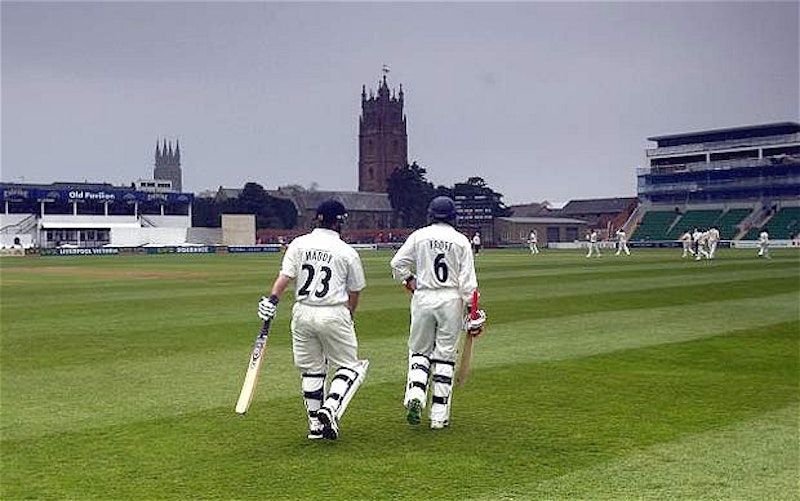 Now is the time that FanGraphs, Baseball Prospectus and various other egghead pundit collectives start calling for a terrible August for the Pittsburgh Pirates and thus a three-peat of the 2011 and 2012 “epic” collapses. It is a poorly smelted baseball amalgam of Dunkirk 1940 and Jonestown 1978 all rolled into getting swept by the Cubs with a winning season on the line and 19 consecutive losing campaigns under our belt. I can’t remember exactly where I was the past two seasons when the Buccos fell under .500 in late summer, never to return. (I was probably cleaning an above-ground pool.) One thing I do know is that I was not at a cricket match in England.

So in order to avoid this “collapse” hubbub it is time to dust off the passport and leave the country. Time to go to a cricket match in Somerset. The ground is at Taunton, not far from Joe Strummer’s rural abode where he died after walking his dog in 2002. It is a mid-August fixture pitting the Somerset County club against the Yorkshire Vikings. Fans of both clubs will be making fun of each other’s accents, no doubt. Updates from Pittsburgh will arrive via borrowed time on a steam-powered computer somewhere in the cider-rich region once favored by the romantic battery of Coleridge and Wordsworth.

Nothing is more difficult than being the token American at a cricket match in Jolly Old. The more Pimm’s consumed, the more you morph into Festus from Gunsmoke. A baker’s dozen of locals will seek you out to render their own explanation of the ornate and pleasantly beige game which is suddenly unwatchable thanks to their didactic narrative littered with lockjawed footnotes. This happened to me at Wormsley Cricket Ground a few years back when I merely wanted to tell Victoria Getty how efficient and economical her gas stations were in America. She promptly offered a tour of the library, and suddenly I felt like Taki. Instead I turned my attention back to the sun-drenched match.

Once you wade through the bushel basket of English apologies, you finally get to the gist and you have wasted at least one-third of the day-long exercise in “sport” as they call it over there. At least cricketers do not wear “alternate” uniforms because the whole sport is a throwback to when an entire nation had so much time to kill it had to pace its drinking between overs at the cricket ground, with plenty of lounging during the contest. There is no MLB umpire Jerry Meals. No Justin Upton arguing every called strike against him in Atlanta. No Ryan Braun with his pathetic Bud Cort countenance. No Alex Rodriguez “update” on TMZ live from Hooters.

Cricket does enable flight from the Sports Illustrated cover jinx that took Pirates closer Jason Grilli onto the DL mere days after he appeared on the wood. But since the Buccos took four out of five from the boring Cardinals as July bowed at PNC Park in Pittsburgh—transformed midweek into an Italian soccer ground and Heinz Field Steelers slugfest thanks to the countless waving of Jolly Roger flags—no one can accuse SI of ruining our season.

With the damp squib of a trade deadline this season, Bucs GM Neal Huntington and skipper Clint Hurdle have a squad that is not really broke and therefore is in no need of repair, as they say. Maybe last year’s deadline acquisition of Marlins masher Gaby Sanchez will finally pay off. Hurdle is platooning players with a yodel shout out to the late Chuck Tanner, the last Pirates manager to hoist the spikey World Series trophy whilst wearing the black and gold back in 1979.

Traveling abroad can also speed the clock on baseball’s “dog days.” Cricket is a bat sport with no foul territory, and the baseball roots are exposed by fast bowlers and spin bowlers. If Randy Johnson would’ve been allowed the cricket bowler’s run-up and windmill delivery from 60 feet, six inches, fatalities would’ve spiced up the game. And who among us doesn’t like to imagine Rick Reuschel decked out in full cricket whites using a flipper to stump some guy from Bath?

After the cricket prescription is filled, a return to the States will be aided by late start times for the Pirates as they embark on their third and final west coast swing. Unless, of course, they are required to make additional travel plans in… October.