Ryan Dempster was dumb, but the reaction was even more stupid. 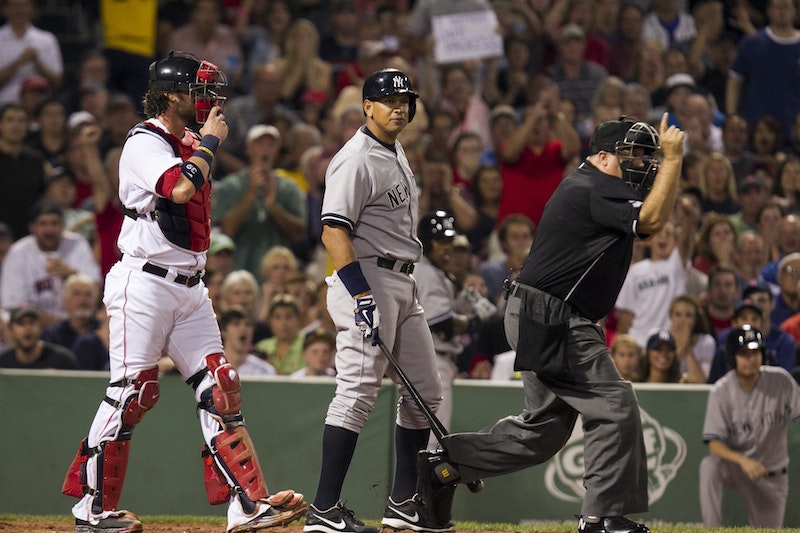 Apparently I’m flying solo here, but last night’s Red Sox/Yankees game, in which Sox hurler Ryan Dempster plunked the pariah Alex Rodriguez (A-Fraud, A-Narc, take your pick) in the second inning at Fenway Park didn’t get me all that riled. Was it stupid on Dempster’s part? Sure. With a 2-0 lead why give the Yankees a leadoff runner for free, not to mention agitating the opposing team when their pitcher, CC Sabathia, was struggling? My son Booker, like me a Sox fan, was irate, saying that if he were Boston GM Ben Cherington he’d suspend Dempster—before Bud Selig gets around to it, if he does—for conduct detrimental to the team. I’d love to see Dempster get time in the penalty box, to mix sports terms, but only because he stinks up the joint almost every time he takes the mound.

Lost in the hub-bub over A-Narc getting hit, and Yanks manager Joe Girardi correctly throwing a fit, and getting tossed out of the game, over the obviously deliberate action by the Dempster, was that the Sox led the game 6-3 in the sixth inning when Dempster predictably imploded. The Yanks won 9-6, and probably would’ve anyway, regardless of whether Rodriguez was hit. It’s been said, over and over, last night and today that Dempster put the Sox’s season in possible jeopardy because of his inexplicable action, but let’s be realistic: Dempster’s been a lousy pitcher lately, and ought to be moved to the bullpen where he can do less harm.

Tim Britton, a Sox beat reporter for The Providence Journal, was way over the top in his summation of the game, saying, “There was a baseball game in there somewhere, some remnant of the national pastime enmeshed in the convoluted theatrical production that premiered at Fenway Park Sunday night.” I generally like Britton’s coverage, but it’s clear he was caught up in the moment, tapping out the purple prose on deadline. This sentence is even worse: “The night didn’t feel like one-in-162. This night felt scripted by Shakespeare.” Say what? Rodriguez isn’t worthy of comparison to a complicated Shakespearean villain; maybe a cad on Real Housewives of New Jersey or some equally cheesy but popular TV show. As for Dempster, he was more like Joe E. Ross’ Toody on Car 54, Where Are You?

I won’t get into the breathless commentary by John Kruk, Buster Olney and Curt Schilling on the ESPN broadcast; I’d have muted it if not for the trio’s unintentional comedy. And comedy there was, such as when Sox manager John Farrell, normally a deadpan kind of fellow, said that Dempster just missed his pitch. His Pinocchio nose hit me through the TV screen all the way from Boston to Baltimore. I really didn’t object to Dempster hitting A-Narc—some say he’s pissed that the Yankees’ albatross allegedly finked on fellow players in the ongoing Biogenesis mess—but couldn’t he have waited until later in the game?

Then there was the respected Joe Sheehan going all Hillary Clinton on us this morning, sermonizing that the approving Fenway Park crowd cheering Dempster was injurious to “the children.” He wrote, not even mentioning that Nats’ golden boy Stephen Strasburg was tossed from a game this past weekend for throwing at a Brave, that Dempster’s a violent bully and the spectators at Fenway a “mob.”

Me, I’ll remember the Hall of Fame careers of Bob Gibson, Walter Johnson Whitey Ford, Don Drysdale, Juan Marichal (and soon-to-be-enshrined Pedro Martinez) and so many other pitchers who brushed back or hit batters on purpose. I’ll remember that Dempster didn’t throw at Rodriguez’s head, which would’ve been atrocious. And I’ll remember that the Sox took just one of three from the Yankees at a time when the Rays are battling them for the AL East championship.