Nothing. He’s simply returned to his career numbers. 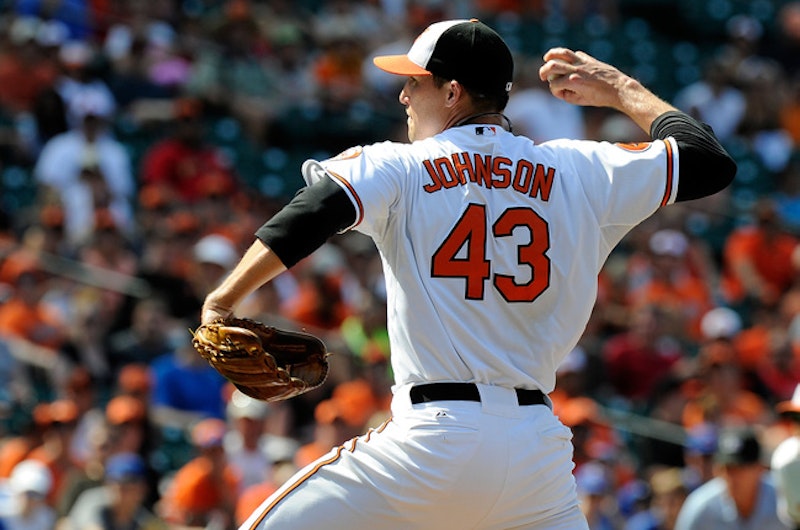 Baltimore’s closer, Jim Johnson, has stunk up the joint this season. After saving a club record 51 games in 2012 Johnson appears intent on setting a record for blown saves this season, and O’s manager Buck Showalter seems perfectly content to let him do it.

Fans are calling for Johnson’s head, some want Tommy Hunter or the newly acquired Francisco Rodriguez to close games, and others are turning on Showalter. What have you done for us lately Buck? I can appreciate the frustration but the baseball season’s a long grind. The guy, or guys, who are getting flamed today could be heroes this weekend or, for some, in October.

Despite Johnson’s recent swoon, and his league leading nine blown saves, it should be noted that the O’s have the same record after 120 games (65-55) as they did last season. It also helps that Johnson chose to rekindle his Pedro Strop impression in the same week that the Tampa Bay Rays went into a tailspin. Rather than lead a band of orange-clad, pitchfork-carrying, mouth-breathers in an attempt to hurl Johnson and Showalter off the Key Bridge let’s examine just what’s going on with Baltimore’s struggling right-hander.

Johnson’s 2012 season was a magical, career year. He had never posted numbers like that before and at 30 he’s unlikely to reach those heights again. Prior to 2012 Johnson’s most extended stint as closer came in 2009 when he saved 10 games but blew six in the process. His 2012 save conversion rate was off the charts as he saved 51 games in 54 opportunities. When people spoke of the Orioles success last season being unsustainable what they were really talking about was Johnson’s unlikely ability to repeat his performance.

Last season Johnson pitched to a career low WHIP of 1.02 and set a career high in groundball rate with 62.3 percent of the balls put in play against him going on the ground. Johnson has always pitched to contact, and drawn criticism for it, and his career average of 5.9 strikeouts per nine innings doesn’t scream “dominant closer.” The fact is Johnson never was and never will be a dominant closer. He generally challenges the other team to put the ball in play and lets the defense do their work. Some of those 2012 grounders have turned into line drives this season as Johnson’s groundball rate has dipped to just 55 percent. In addition to his groundball average dipping, Johnson has yielded a BABIP of .321 this season compared to the career low mark of .251 he set in 2012. Johnson got a little lucky last year and has been a little unlucky this year. He’s also walking batters and allowing home runs at a rate more in line with his career averages than last year.

The problem facing Showalter is that his options at the back end of the bullpen are limited. While some fans will clamor for Darren O’Day to be given a shot at closer, moving the side-armer from his current role simply creates a hole in the seventh and eighth innings. Tommy Hunter has the stuff of a classic closer but the homer-prone hurler is Showalter’s lone option to go multiple innings out of the pen. The only real choice to replace Johnson is newcomer K-Rod, who has allowed four home runs in just nine innings as an Oriole. Unlike Pedro Strop, who was hidden at the end of the bullpen, Johnson would still be needed to pitch high leverage innings even if he were removed from the closer role. Johnson’s struggles haven’t been because he’s caved to pressure; he simply hasn’t pitched well. Fans won’t like it but Showalter is likely to stick with Johnson in the ninth inning.

The 2013 Orioles team is better than the 2012 version. The maturation of Manny Machado, Adam Jones, and Chris Davis has larded the lineup with three legitimate All Stars. The continued success of Chris Tillman and Miguel Gonzalez over a full season, coupled with the addition of Bud Norris has given the O’s their best rotation since the late 1990s. The fact that this year’s bullpen is simply good rather than fantastic has overshadowed the progress that has been made in other areas.