Theo Epstein Is Turning Around The Cubs 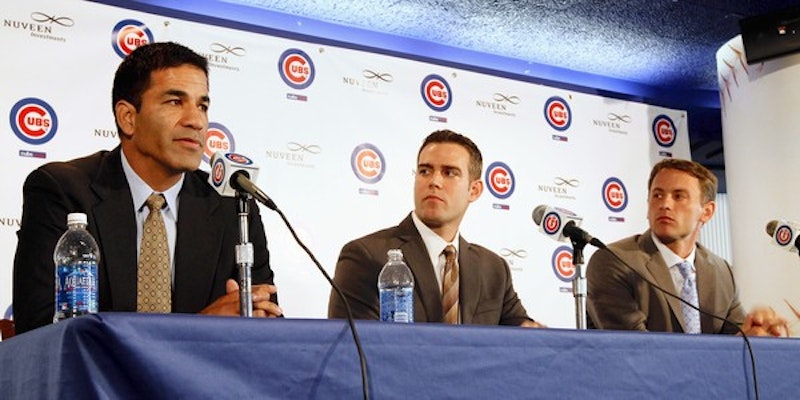 Jonathan Bernhardt recently suggested in an article for Sports on Earth that the Chicago Cubs’ front office (President Theo Epstein, GM Jed Hoyer, and Scouting Director Jason McLeod) are doing a poor job of rebuilding their struggling franchise. That assertion can’t be further from the truth. The Cubs, given their resources and circumstances, have done an excellent job at establishing their club as a future contender.

Bernhardt does get one thing right: the former front office, led by Jim Hendry, really screwed up the team. While Epstein left current Red Sox GM Ben Cherington with a mess to clean up, there were at least quite a few valuable players kicking around in Boston, both at the major and minor league levels; Hendry left Epstein with almost nothing.

Look at their farm system now. The Cubs’ minor league affiliates are stacked with top tier hitting prospects like Albert Almora, Jorge Soler, Javier Baez, and Kris Bryant (once he signs). You’d be hard pressed to name another team with comparable offensive prospects. On the pitching side—well, they’re not as flush with hurlers. That’s not a knock on the front office, however. Spending your top draft pick on the best player available—regardless of position—is always the right move, and in the last two years, the best players on the board happened to be hitters. Additionally, Epstein and Co. have tried to add pitching depth through outside sources; they signed Cuban defector Gerardo Concepcion and traded for right-hander Arodys Vizcaino last year. Unfortunately, both have succumbed to injury. While their minor league pitching is weak, Bernhardt declares that “[it] pale[s] in comparison to the still-ongoing horror show at the major league level.” That’s completely false. If the Cubs are doing one thing right at the major league level, the credit belongs to their starting rotation, which ranks twelfth in all of baseball, and sixth in the National League, per Fangraph’s calculation of WAR.

The biggest issue I have with Bernhardt’s article is the lack of patience he shows with the current management. Did he really think that they could build a contender in one year? Epstein didn’t take over until October 2011, and when he did, the team was in shambles. The fact that he’s brought the club this far is a miracle. Bernhardt is stuck on the antiquated notion that a general manager needs to put his team into a position to win as many games as they possibly can, even if the ceiling is an 81-81 ballclub with a stagnant farm system. From a player development standpoint, there’s no point in winning games if you’re not going to make the playoffs. For now, the best thing for the Cubs to do is lose, because the more losses they pile up, the higher draft pick they’ll get next year. Bernhardt interpreted the team’s signing of Edwin Jackson as a sign that “they expected to at least be flirting with .500 right now,” which is wrong. No, the Jackson signing predicts something much more promising than a .500 club—it’s a statement that says they expect to contend by the third, or, at the very least, fourth, and final, year of his contract.

Bernhardt goes on to bash the Starlin Castro and Anthony Rizzo extensions, and he sounds silly doing so. I can understand the backlash towards Castro—he is hitting .228—but Epstein shouldn’t regret extending his shortstop. Castro, still only 23, is simply growing as a hitter. I doubt his struggles will continue. Second-guessing the Rizzo deal is what I really don’t understand. I don’t think Bernhardt quite understands why he’s doing it, either, because he first “[questions] his future against left-handed pitching,” but then immediately admits “he’s actually doing better against [lefties] than righties this year.”

The Cubs front office ought to carry on with what they’re doing and Jonathan Bernhardt needs to learn to be more patient. The North Side will be competitive very soon.