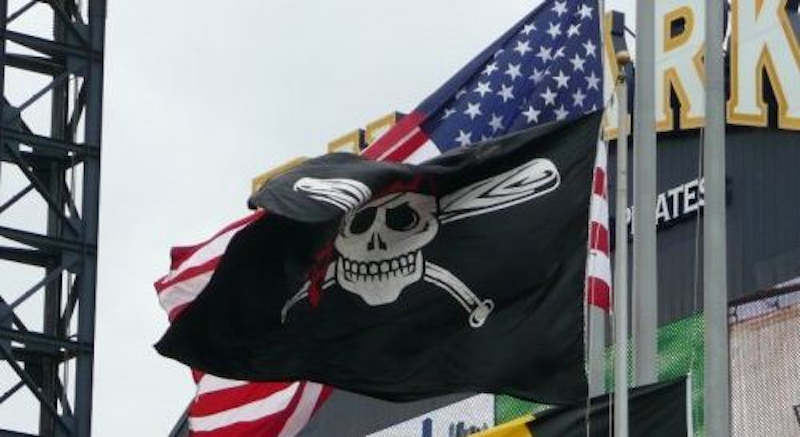 The affirmations arrive now by landline phone from distant family members, with backslaps in the barroom, a pause in the grocery aisle, an extra wave over the garden fence, by text from youthful acquaintances, maybe even a Facebook nod from an ex-girlfriend. They usually begin with “Your Pirates…” and on they go. In person, neighbors sometimes study my face to see if I look different or if there is a gray streak or if I’m building a mega-shrine in my shed.

“Your Pirates are showing me something,” says a Mets fan with a Sam Adams in hand. Mets fans have that Son of Sam look right about now, and I keep my dog Mazzy well away from them. Yes, they were the first team this season to win 50 games. They are showing you something. Because they have shown me something since I went to my first game at the sparkling new Three Rivers Stadium in 1970. (It only sparkled for about a week). The day they won game number 50, I mowed the Pirates insignia into my backyard. I thought about the enjoyable bookend world championships of the 1970s, the drug-torn 1980s that almost toppled a franchise dating back to 1887, and then, Jim Leyland delivering us to the edge of the Red Sea in the early 1990s.

I could spare you the Bataan Death March of Pirates atrocities dating from October of 1992 to present, but that would rob us of the background angst required to understand the true Bucco fan experience. The Red Sox trademarked heartbreak and own Kindle rights and have resold it all to ESPN and that’s fine. It all became a horrible cliché, but a true one in that heartbreak is a big part of this game.  Boston’s was well-documented with a public relations all-star team of celebrity fans and spokesmodels weeping in sepia for Ken Burns or ESPN Classic. In the end, the Red Sox got their spikey trophy not once but twice. Being a Pirates fan on the east coast is a much more solitary life without the Caroline Kennedy insiders and Ben Affleck Fenway apologists. All we have is a shy Michael Keaton on the occasional talk show and rapper Wiz Khalifa shilling for the omnipresent Steelers of the National Felons League.

Pirates fans know pain well beyond the Sid Bream slide of October 1992. The collective experience is a baker’s dozen of groin-punches. There’s submarining reliever Brad Clontz throwing a wild pitch at Shea Stadium to send the hated Mets into the post-season. Or a glimpse of Jason Kendall’s dangling ankle injury and subsequent giant contract; the horror of Jerry Meals giving away a 19-inning game in Atlanta with an embarrassing bit of umpiring in the wee hours. There was also the signing of two Indian-born cricketers who won MLB contracts via a rigged game show called Million Dollar Arm. Fans were getting the feeling MLB was using our beloved franchise as some sort of petri dish for a junket-thriving “international development” office among Bud Selig’s Park Avenue empire. So the response was to let the Pittsburgh scouting directors and development people use some ridiculous Navy SEALS training antics on the newest draftees to the black and gold. It all got a good laugh from the media and those boring Cardinals fans in St. Louis.

Observers presently hoist a finger at Pirates fans to remind us of the past two summers when the team went from near the top of the NL Central at the All-Star break to its usual fourth-place perch by Labor Day. Manager Clint Hurdle has addressed those cynics adroitly and with Leylandesque candor. Though none of us can know what will happen as the season blows past Bastille Day, Clint says he knows what will happen. And that is all I need to know because these are my Pirates. Right now it does not matter how long it has been since victory outnumbered defeat. It doesn’t matter that our right field run production is a statistical betrayal of Roberto Clemente, or that ESPN’s Alex Cora doesn’t believe in us.

No, what matters now is watching the ball fly off a left-handed bat and tower through the air bound for the banks of the Allegheny River. It leaves the gem of a ballpark with the urgency of a tardy caterer. The bat is gripped by number 24 Pedro Alvarez, the son of a Washington Heights car-service driver, a first-round draft pick who is the best third baseman in the game right now. Somewhere between his point of contact with the ball and his lightning follow-through, there is Willie Stargell ectoplasm in that flash. For a moment, Pops is back, and he’s telling his teammates to get on his shoulders.