Astros, Marlins, I'm looking at you. 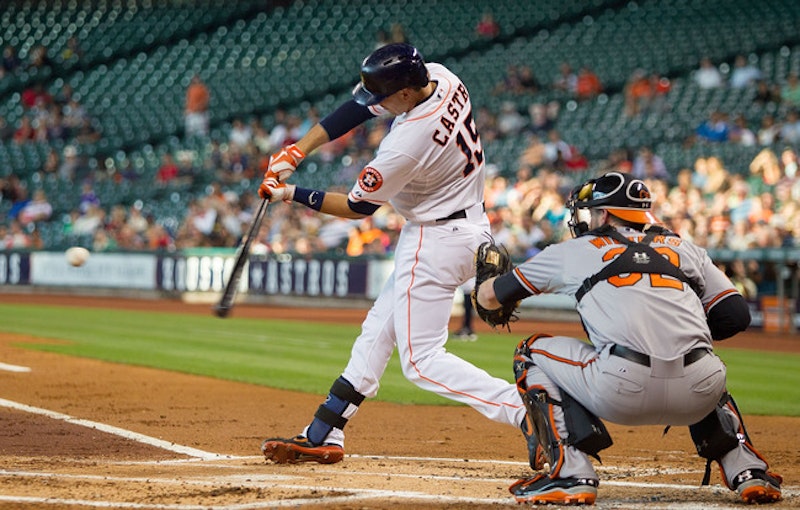 The fan voting for MLB’s All Star game will draw to a close late next week. The most recent voting results offer few surprises. Justin Upton of the Braves currently ranks second in All Star voting for National League outfielders despite slumping badly over the past few weeks. Upton clubbed 12 homers in April but has gone yard just three times over the past two months while his average has dipped into the .240s. Despite the slump, Upton maintains a sizeable lead over the more deserving Carlos Gonzalez of the Rockies. In the A.L. Nick Markakis has a slight lead over Jose Bautista for the final outfield spot while the other positions seem to be set.

The potential inclusion of Markakis has led to charges of ballot stuffing lobbed at Orioles fans. After 15 years of watching the American League All Star squads stacked with Red Sox and Yankees players it’s about time the fans of Baltimore exacted a little revenge. Markakis is having a solid season for the Orioles and remains one of the best defensive right fielders in baseball. Bautista probably deserves the spot over Markakis but his .243 average hasn’t set the world on fire and the selection of Markakis wouldn’t be a travesty.

There will inevitably be much hand-wringing and fan backlash when the All Star rosters are finalized. The required presence of a representative from both the Astros and the Marlins will only make the final selections that much more difficult.

The rebuilding Astros really only have three viable candidates for the A.L. All Star squad. Bud Norris has been Houston’s most reliable starter, and most discussed trade asset, though his inflated WHIP (1.42) and meager win total (5) could detract from his All Star resume. Norris’ battery mate, catcher Jason Castro, has been the Astros’ best player and hope for the future. Castro has hit 22 doubles and 10 home runs and posted a .808 OPS in the first half of the season. The 26-year-old catcher has also account for 2.1 WAR in 2013. Castro deserves consideration before someone like Baltimore’s Matt Wieters (who is currently second in the A.L. catcher voting behind Joe Mauer. Castro’s inclusion could leave Cleveland’s Carlos Santana with three days of rest during the All Star break. Second baseman Jose Altuve could receive some consideration but would mean that the A.L. squad would carry three second sackers (Robinson Cano and Dustin Pedroia are givens). Altuve has stolen 17 bases and posted a .295 batting average but his meager .327 on base percentage make him an unlikely choice.

The Miami Marlins have done their best to tank the 2013 season. Miami currently ranks at the bottom or near the bottom of MLB rankings in nearly every major offensive category. Unlike Houston’s rebuilding purge, the Marlins do have some remaining star power in the form of Mike Stanton. The 23-year-old slugger has missed significant time to injury this season but is healthy and back in the lineup. Stanton’s numbers aren’t All Star worthy (seven home runs, 20 RBI, .261 batting average) but he is still one of baseball’s best young stars. While the Marlins’ offense has been woeful the starting pitching has been surprisingly good. Veteran hurler Ricky Nolasco, who will almost certainly be traded before July 31st, is having his best season. Nolasco has just four wins but he’s posted a 1.20 WHIP, 3.68 ERA and accounted for 1.5 WAR. The selection of rookie pitcher Jose Fernandez would be a nod to the Marlins’ future. The 20-year-old Fernandez has bested Nolasco in terms of WHIP (1.12) and ERA (2.98) while striking out nearly a batter per inning.