How Can The Orioles Fix Their Pitching Rotation? 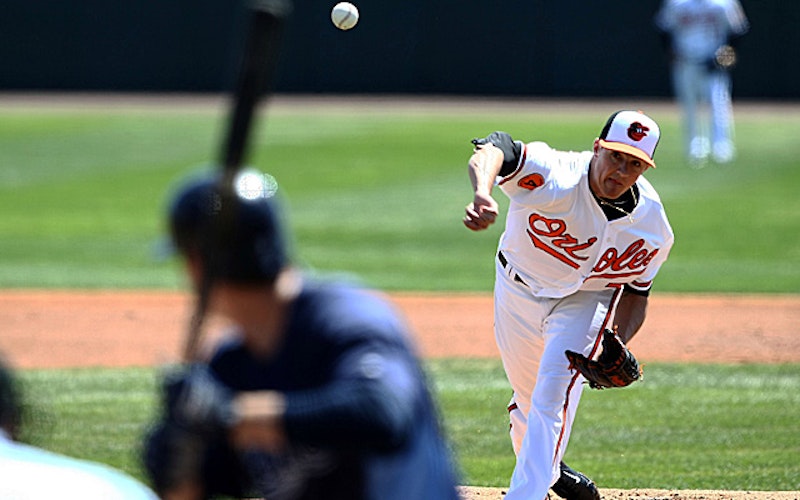 The oblique injury to Wei Yin Chen, rookie struggles of Kevin Gausman, and maddening inconsistency of Jake Arrieta has left the Baltimore Orioles with an unsettled starting rotation. The team’s offense has emerged as one of baseball’s best thanks to the development of Chris Davis, Adam Jones, and Manny Machado, while the defense and bullpen have generally picked up where they left off in the ALDS, consistently solid and often spectacular. The weak link for the O’s remains the rotation. If Baltimore hopes to remain in the American League pennant race they may need to swing a trade for an established starter.

The Cubs have two pitchers who should interest Baltimore: righties Matt Garza and Scott Feldman. Both are free agents following the season and have the added benefit of extensive experience pitching in the American League. Garza figured to be one of the most sought after players prior to the 2012 trade deadline until he suffered an injury, missing the last half of the 2012 season and the first month of 2013. The 29-year-old Garza is just 1-1 with a 4.98 in six starts for the Cubs but his career 3.88 ERA and 1.28 WHIP will likely make him highly sought after once again.

The Cubs’ asking price for Garza may exceed Baltimore’s available resources in terms of dollars and prospects. Garza is earning over $10 million this season meaning that any club that acquires him will be on the hook for the remaining balance of his hefty 2013 contract. The rebuilding Cubs are short on advanced pitching prospects. With Gausman and Dylan Bundy virtual untouchables the O’s may have to sell Chicago on the merits of lesser prospects like Mike Wright of Double-A Bowie and Eduardo Rodriguez of Single-A Frederick.

A package centered around Wright or Rodriquez may not be enough to acquire Garza but it could be a suitable return for Feldman. Chicago signed the 30-year-old righty to a one-year $7 million deal as a free agent last winter. Feldman fell out of favor with the Texas Rangers last season but does possess extensive American League experience (over 700 innings) and is in the midst of his best season, currently 6-5 with a 3.05 ERA and 1.10 WHIP. Feldman has a 3.29 ERA in nine career postseason appearances. The Orioles have done well with Rangers castoffs in recent seasons with the success of Chris Davis, Tommy Hunter, and Darren O’Day. Feldman could be the next in line.

Another pitcher rumored to be on the Orioles’ radar is Astros’ starter Bud Norris. It wasn’t that long ago that Norris was viewed as a future mainstay in the Houston rotation. Now in his fifth big league season Norris has more value to the Astros as a trade chip than a starting pitcher. At 28 Norris is a younger option than either Garza or Feldman, and, unlike the two Cubs, is not eligible to become a free agent until after the 2015 season. If the Orioles were to acquire Norris he’d be more than just a late season rental. Norris will also carry a higher asking price than Feldman or Garza. If GM Dan Duquette is forced to part with a couple of prospects he is more likely to do so for a player that he can control for several seasons. Norris sports a 3.64 ERA in 15 starts in his first season in the American League. On the downside, he is allowing a career-high 9.9 hits per nine innings and a career-low 6.6 strikeouts per nine.

The other pitcher who may interest the Orioles is Ricky Nolasco of the Marlins. Miami blew up their team in the offseason but it hasn’t stopped Nolasco—a free agent this fall—from putting together his best season. Nolasco, 30, has just four wins for the dreadful Marlins but he’s posted an impressive 3.61 ERA and 1.15 WHIP in 15 starts. Nolasco’s career 3.49 strikeout-to-walk ratio makes him a viable target for any contender, although he doesn’t have any experience pitching in the American League and has never pitched in the postseason.

If the Orioles can’t swing a deal for one of the hurlers mentioned above, they’ll be left hoping that Chen can successfully rehab his oblique injury and that one of Kevin Gausman, Zach Britton, or Dylan Bundy can provide a lift down the stretch. Britton pitched well on Tuesday night against Detroit but lasted just 5 1/3 innings, Gausman is in Triple-A refining his location and off-speed pitches, and Bundy has yet to throw a pitch this season. For now the Orioles will keep putting their playoff chances in the right hand of Sweaty Freddy Garcia every fifth day and hope for good news.