Playing the “what if” game. 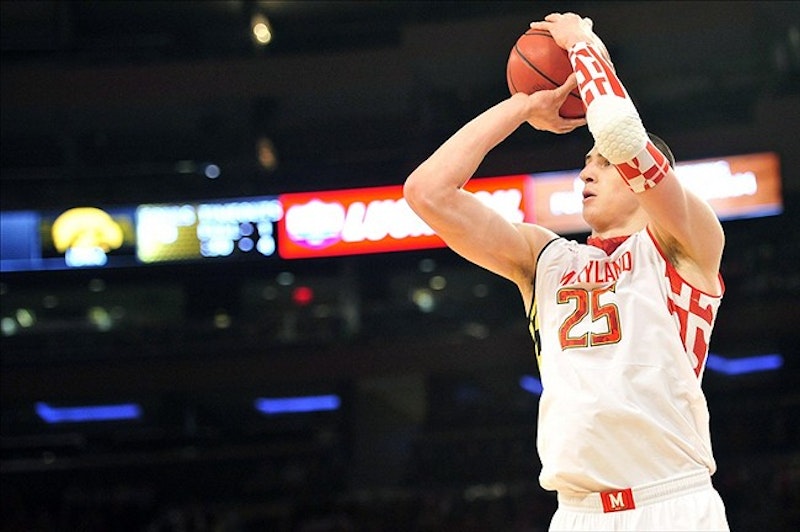 Alex Len, former center at the University of Maryland, was selected by the Phoenix Suns with the fifth overall selection in last week’s NBA draft. The Suns clearly chose Len more for what he could become than for anything he did with the Terps. The selection was a bittersweet development for Maryland fans as Len leaves behind a trail of “what ifs” in College Park.

Len’s ascension up pre-draft prospect rankings led many Baltimore sports personalities to discuss one of their least favorite topics; the NBA. The league is generally met with disinterest or derogatory comments. The fact that the Terps’ frustratingly inconsistent sophomore center was considered a top draft prospect seemed to fuel the fire of many local NBA haters, media and fans alike.

Len arrived in College Park less than two years ago as a seven-foot tall Ukrainian import who spoke little English and had the physique of a snow shovel. After sitting out the first 10 games of the Terps’ 2011-2012 season Len flashed superior athleticism, shot blocking ability, and a surprisingly soft jump shot. The expectations for Len and the Terps 2012-13 season crested when Xavier transfer Dez Wells joined the squad late last summer.

The 2012-13 basketball season was tantalizing and maddening for Terps fans longing for a return to NCAA tournament success. The Terps were young and talented but suffered due to a lack of experienced guard play. Len’s stat lines went up and down like a roller coaster. He often followed great performances with clunkers like the losses at Boston College (four points) and Florida State (eight points). Maryland fans wanted to see Len consistently dominate, an unlikely expectation for a 19-year-old college student.

The real irony for Len is that the biggest game of his collegiate career likely sealed his dual fate as an NBA lottery selection and a disappointing footnote in Terps history. Len scored 23 points, grabbed 12 rebounds, and blocked four shots in Maryland’s season opening loss to Kentucky and ballyhooed freshman Nerlens Noel. Len exhibited his rare combination of size and skill, while outplaying the much-publicized Noel on national TV. Len put himself firmly on the NBA radar with that performance. He also raised the expectations of Terps fans to a level that he and his teammates were ill equipped to match. Len shoulder much of the criticism as the most talented player on the squad but the inconsistent play of guards Pe’Shon Howard, Seth Allen, and Nick Faust often resulted in the 7-footer going long stretches of play without touching the ball.

Len, who turned 20 last month, is now a former Terp. He’ll take his talents, and a lot of Maryland branded gear, to the desert. He’ll likely alternately confound and excite Suns fans just as he did those in College Park. Maryland fans need to let go of the disappointment of last season and accept Len for what he was; the first Terps lottery pick in a decade and the first of the Mark Turgeon era. While Len and crew failed to answer the hopes of the Maryland faithful last winter a new hope has emerged. The hope must now be that Turgeon and his staff can parlay the success of Len into a recruiting asset. The better Len plays in Phoenix the more positively it will reflect on Turgeon’s rebuilding program in College Park.

Turgeon and company are rumored to be hot on the trail of several highly regarded front court recruits. The Terps coach can now speak to those recruits about the experience of coaching a recently minted lottery pick.