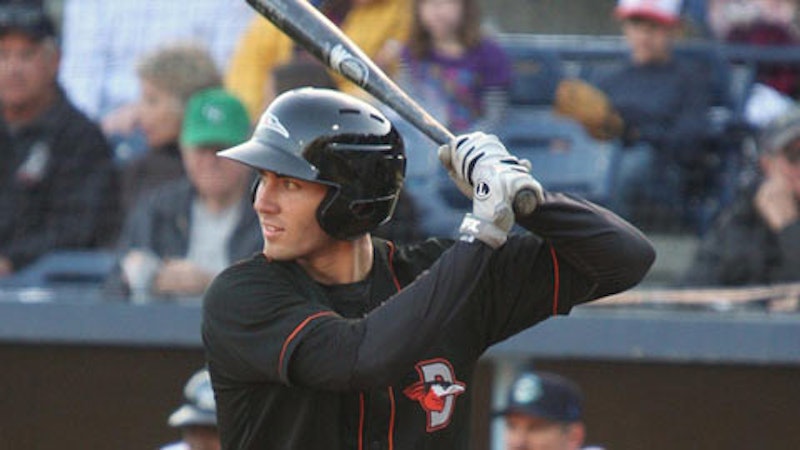 It hasn’t been a great season for the Baltimore Orioles’ top prospects. The news on Dylan Bundy goes from bad to worse with the potential for season-ending surgery. Infielder Jonathan Schoop looked to be on the fast track to Camden Yards before succumbing to a stress fracture in his back that’s left him on the sidelines since mid-May. Kevin Gausman was fast-tracked to Baltimore only to be knocked around and shuttled back to the minors. Gausman is back with the big club now and could even get a start this weekend, which says more about the woeful state of the O’s rotation than Gausman’s progress.

The Orioles’ player development system under former executive Andy MacPhail operated under the philosophy of “Grow the arms, buy the bats.” MacPhail made some tremendous moves during his tenure including the trades for Adam Jones and Chris Davis, the signing of Matt Wieters and the drafting of Manny Machado. One thing the Orioles didn’t do particularly well under MacPhail was grow the arms. Of the once ballyhooed “Cavalry” only Brian Matusz and Chris Tillman have secured a spot on the Orioles roster. Zach Britton, currently in the O’s rotation, still shows promise but could be pushed back to Triple-A when Wei-Yin Chen returns from the disabled list.

While Bundy and Schoop have battled injuries several young hitters have emerged as potential impact players in the team’s minor league system. The Orioles expected great things out of Nick Delmonico when they selected him in the sixth round of the 2011 draft and gave him $1.5 million to spurn the University of Georgia. Delmonico posted a solid season in 2012 when he slashed 22 doubles, 11 home runs, and drew 47 walks in 96 games for the Delmarva Shorebirds. The 20-year-old infielder has taken another step forward this season showing an increase in power with the move up to the Carolina League. Delmonico has already mashed 12 homers, to go with 11 doubles, in just 158 at bats this season. Delmonico is doing his best Chris Davis impression posting a .955 OPS for the Frederick Keys.

Delmonico’s teammate at Frederick, Christian Walker, has also turned heads. Baltimore selected Walker in the fourth round of the 2012 draft out of South Carolina. The first baseman hit well in a brief trial with the Aberdeen Ironbirds at the end of the 2012 season, and breezed through the South Atlantic League posting a .353 average and .894 OPS in 31 games before his promotion to Frederick. Walker got off to a hot start for the Keys before slumping over the past week. For the season the 22-year-old Walker is hitting .315 with 14 doubles, seven long balls, and 44 RBIs.

The most intriguing bat in the O’s system may belong to Cuban defector Henry Urrutia. The 26-year-old is currently slugging for the Bowie BaySox. After not playing competitively for more than two years the outfielder has wasted little time on solving Eastern League pitching. Urrutia’s signing with Baltimore last summer didn’t generate nearly the buzz, or payday, of countrymen Yasiel Puig and Jorge Soler. Urrutia lacks the high-end athleticism of either Soler or Puig but he may be just what the Orioles need down the stretch in 2013. Urrutia is hitting .366 with a .992 OPS in 51 games for Bowie. Given the Orioles have struggles to find a productive designated hitter throughout the 2013 season, unwillingness to take on additional salary, and the dire need for another starter, Urrutia could be in line for a shot at the DH job as the trade deadline nears.

The emergence of Manny Machado in Baltimore may have signaled a minor rebirth of the O’s player development system. With Schoop on the mend, Urrutia close to contributing, and Delmonico and Walker turning heads in the low minors, the Orioles are finally growing some bats.