The Week in Fights #5 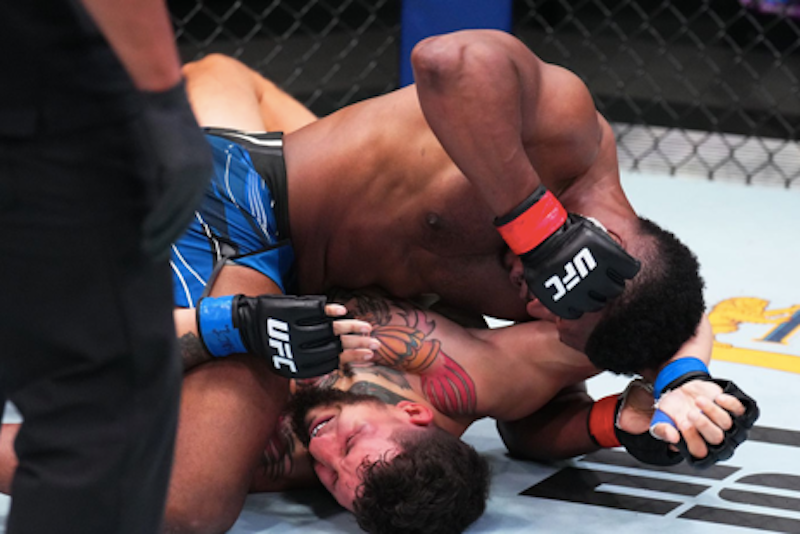 There are two types of people in this world: those who work and those who do the work. UFC Vegas 56 brought that contrast into sharp relief, with a main card bookended by fights featuring long-time worker in the hurt business—former Bellator and M-1 Global heavyweight champ Alexander Volkov—and a man who named Azkar Mozharov, who’s done the work of obscuring his professional MMA record by competing under a variety of soundalike names. That the former won handily and the latter fell to a barrage of elbows came as little surprise, but the particulars of each narrative warrant further scrutiny.

Alonzo Menifield defeats Azkar Mozharov by TKO (round 1): Menifield, a 34-year-old former CFL and Arena Football League player, has impressed with his physical gifts since announcing his presence in 2018 on Dana White’s Contender Series via a vicious beatdown of Dashawn Boatright. Following that victory, he went 4-3 in the UFC, winning in impressive style—that first-round KO of submission specialist Paul Craig, now ranked eighth in the company at 205 pounds, has aged well—or finding himself on the receiving end of boring decisions, as against skilled wrestler Devin Clark and the massively-muscled, easily-gassed William Knight.

Here, however, this somewhat frustrating fighter—prone to mental lapses of the sort that have hampered similarly talented light heavyweights Khalil Rountree and Ryan Spann—showed up in stellar condition, fighting angry behind a cuirass of abdominal muscle unlike anything seen in the division since the UFC’s TRT-exception heyday. As Menifield made clear in his post-fight interview as well as a backstage interview shortly thereafter, his opponent’s record-altering subterfuge and unproven pedigree had infuriated him. The result was one of the most hellacious main-card thrashings in recent years: Menifield took Mozharov down twice, landing 19 significant strikes to Mozharov’s two and controlling him for 4:19 of a 4:40 fight.

For Mozharov, an appearance in the UFC—skipping the prelims and going right to the big show—represented the fulfillment of a bizarre decade-long odyssey during which the fighter also competed under the noms de guerre Artur Sadkov, Artur Shadkov, and Arthur Shadakov before growing a thick neckbeard and legally changing his name to Askar Mozharov. The Eastern European fighter, who hails from either Ukraine, Belarus, or somewhere else entirely, was the subject of a Sherdog investigative report that prompted the formal amendment of his won-loss record prior to the Menifield bout.

Mozharov, who lost to a string of nobodies, had even written emails to Sherdog’s Fight Finder team purporting to be the promoters of those obscure events in order to have them stricken from his record—in one case creating a badly photoshopped fight poster to buttress his case. Was it all to land a fight in the UFC, a last chance at a fresh start? The fighter, who came out talking trash and swinging wildly, seemingly thought so. Perhaps he could catch Menifield the way UFC veteran Ovince St. Preux had caught him in their 2020 fight. If nothing else, Mozharov had that sort of puncher’s chance, didn’t he?

He didn’t. Ovince St. Preux, though in decline for nearly half a decade, was a proven commodity, a skilled and versatile fighter whose puncher’s chance had been verified via exhaustive video evidence of him punching his opponents. Mozharov was merely a neckbearded man doing the work of dissembling, as doomed in the cage as any of those soft-bellied pretend tough guys from the early days of MMA.

Alexander Volkov defeats Jairzinho Rozenstruik by TKO (round 1): You can’t ask for much more than the 6’7”, 260-pound “Drago” Volkov, now 9-4 in the UFC, gives you in his matches. Of course, that bit more he could give, whether in striking against Ciryl Gane, wrestling against Curtis Blaydes, or simply ring awareness against Derrick Lewis and Tom Aspinall, probably spelled the difference between victory and defeat.

Volkov’s always been a craftsman, though, capable of beating the likes of stout Blagoy Ivanov, glass-jawed steroidal powerhouse Alistair Overeem, and jiu-jitsu ace Fabricio Werdum while losing to anyone near the top tier of the sport, such as his countryman Vitaly Minakov (to whom he dropped the Bellator heavyweight title), criminally underrated fatso Tony Johnson, or ageless Cheick Kongo. He’s also a mere 33—a callow youth in the UFC’s gray-haired heavyweight division of fortysomething and late-thirtysomething bruisers—and has only ever been knocked cold twice, once by the aforementioned Lewis, who always surprises his victims, and once by Minakov, who was then at the peak of his considerable powers.

Jairzinho “Bigi Boy” Rozenstruik, by contrast, is 34—seemingly a prospect owing to his brief tenure in MMA, but with 85 sanctioned kickboxing matches under his capacious belt. Since coming to the UFC, Rozenstruik’s cautious, counterpunching style had served him well against the bottom and middle tiers of the heavyweight division, enabling him to score easy knockout victories against the likes of past-their-prime former champions such as Andrei Arlovski and Junior Dos Santos. But he’s come up short against anyone still capable of out-striking him, as Ciryl Gane did and as Alistair Overeem was doing until Rozenstruik smashed him in the final seconds of their bout, or out-wrestling him, as Curtis Blaydes did, or merely setting him down with a single blow, as current heavyweight champion Francious Ngannou did when he dealt “Bigi Boy” his first UFC loss.

Rozenstruik, whose ideal pairing would be against a big slugger on the order of Tai Tuivasa or Derrick Lewis—he’d probably lose to either man—found himself with a bad matchup against Volkov. The Russian was five inches taller, more experienced in all facets of MMA, and coming off a lightning-quick submission loss to British prospect Tom Aspinall that he admitted had wounded his pride.

Volkov isn’t particularly athletic or unathletic—he’s got thick totem pole legs and skinny-fat rolls on the sides of his stomach regardless of how much weight he loses during a training camp, yet moves better than one might assume—but is a smart strategist, and he deployed a game plan that made short work of Rozenstruik. “Bigi Boy,” like many boxers accustomed to working in rings with ropes rather than cages with fencing, prepares to fire off monstrous counterpunches by leaning back to avoid incoming strikes. But there’s only so much room in the cage, a structure which will, unlike the ring and its ropes, eventually limit how far one’s backward bend can go. Volkov quickly found the range for his jabs, kicks, and straight punches, then guided Rozenstruik into the cage. Once he ascertained that “Bigi Boy” couldn’t go back any further, he waded in with thunderous, accurate punches of his own, quickly securing a TKO even more impressive than his prior finishes of dangerous strikers Alistair Overeem and Walt Harris.

Volkov could likely do this good work for another decade, during which he will earn a title shot at some point along the way. Eventually every other top guy will have cycled through, and he’ll still be there, having beaten most of the remaining contenders and lost only to the ones who’ve already failed in their own title challenges. He might’ve gotten to a title shot sooner had he secured his decision win over Derrick Lewis, but such is life. Rozenstruik, meanwhile, is in no danger of losing his own top-15 spot in the UFC. There are still sluggers in the company left for him to fight, even if he can’t beat anyone else, and there is loads of value in that—who doesn’t want to watch big, beefy men trying to send each other to the shadow realm?