The Week in Fights #6

Reflections on the latest fight of the century. 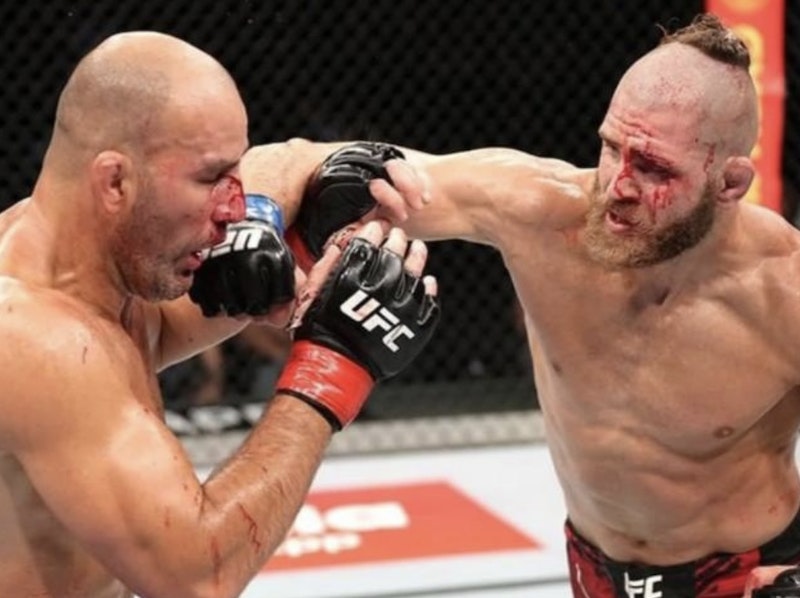 When you turn on a fight card, you have no idea what to expect. Hopefully you get a bunch of fast finishes, first-round knockouts and submissions, because that speeds everything along. The UFC needs to pay guaranteed bonuses for these, rather than doling them out to only some of the fighters on the card. The company’s running in the black, so why not incentivize the pillow-fisted men and women who weigh in at 135 pounds and under to hurry up and turn on the black lights?

The UFC 275 main card delivered the goods, though. Every fight except the co-main event ended in a highlight-reel finish, and the one that didn’t end that way saw the jacked Taila Santos deflating flyweight queen Valentina Shevchenko in a fight that—even in well-deserved victory—showed the reigning champ, like Jon Jones in his final two light heavyweight tilts against Dominick Reyes and Thiago Santos, is human. We also witnessed a beefed-up Zhang Weili, who I suspect now has plenty of that steroid size on her, retiring string-bean ex-Polish strawweight champion Joanna Jędrzejczyk with a vicious spinning backfist.

Jiří Procházka defeats Glover Teixeira by submission (rear naked choke, round 5): With all of that by way of prelude, the light heavyweight title clash is what UFC 275 will be remembered for, the way UFC 165 was defined by Jon Jones eking out a defensible but close victory over Alexander Gustafsson in what to that point was the most competitive fight of Jones’ young career.

This was a better fight than the first Jones-Gustafsson bout, which was bloody but never close to a genuine finish, and it was better than Gustafsson’s fun and somewhat controversial decision loss to Daniel Cormier at UFC 192. Gustafsson had bad luck, I suppose, but he was often in great fights—and when he sent someone to the canvas, as he did to a seemingly declining Glover Teixeira at UFC Fight Night 109, it was usually curtains for their career.

But Glover, who’ll turn 43 in October, has enjoyed more MMA lives than a cat, riding a couple ADCC South American BJJ medals into a career in combat sports that started with a bang in the early-2000s. He entered the UFC and, looking like a smaller Junior Dos Santos, quickly ran through top fighters such as Ryan Bader, Rampage Jackson, Kyle Kingsbury, and James Te Huna en route to a tedious decision loss to Jon Jones at UFC 172, who kept Teixeira upright and beat the hell out of him for five rounds. This first phase of his career was accompanied by prodigious hype from commentator Joe Rogan, who promotes jiu-jitsu people over everyone else, putting even awkward specimens like Chase Hooper and Ryan Hall over like heroes from The Iliad.

From there, Teixeira spent several years in the weeds, mostly beating overmatched foes like Jared Cannonier and washed-up greats like Rashad Evans, while getting punched out by Gustafsson and Anthony “Rumble” Johnson and outwrestled by Corey “Overtime” Anderson and Phil “Mr. Wonderful” Davis—two men who, though now in Bellator, might still be among the top five light heavyweights in the world.

Then Teixeira went on one of the greatest late-career runs of alltime, using a more grappling-heavy approach to slice through the likes of Nikita Krylov, Anthony Smith, and Thiago Santos—the last of these a truly thrilling come-from-behind win that proved his chin had many years left in it—before summarily grounding and submitting light heavyweight champion Jan Blachowicz. Blachowicz, whose “Polish Power” had dealt middleweight king Israel Adesanya his first loss and made short work of Dominick Reyes and others en route to the title, was manhandled by the Brazilian. What kind of man was this new Glover Teixeira, exactly?

On the other side, there was 29-year-old Jiří Procházka, who despite his relative youth has fought for a decade. You can watch most of Procházka’s pre-UFC fights—the bulk of which took place in the entertaining Japanese promotion Rizin, which still lets people wear wrestling shoes and conducts their matches in a ring with ropes—on the splendidly curated “That’s Why MMA!” YouTube channel. These fights are destination viewing if you care about MMA even a little bit, because Procházka has finished 28 of his 29 career fights, and among those Rizin victories you’ll find some of the best guys in the world. Current Bellator light heavyweight champion Vadim Nemkov (who deserved to lose to Corey Anderson in their recent and somewhat controversial three-round no contest at Bellator 277), rising Bellator star Karl Albrektsson, gold medal judoka Satoshi Ishii, former Bellator middleweight champion Brandon Halsey, and UFC veteran C.B. Dolloway (sporting the aforementioned wrestling shoes) were all beaten senseless by Procházka in bloody, back-and-forth contests.

Former Strikeforce light heavyweight champion Muhammed “King Mo” Lawal—perhaps the best fighter of the 2010s not to compete in the UFC, and among the best amateur wrestlers to ever transition into the sport—stopped Procházka with a flash knockout early in their 2015 Rizin World Grand Prix fight on the same night Procházka beat Nemkov in a draining bout. But a much-improved Procházka avenged that defeat four years later, knocking out a declining and soon-to-retire Lawal in the third round of their Rizin 15 rematch—a bout in which he stuffed Lawal’s takedowns and pushed the superior wrestler around the ring with ease. After arriving in the UFC, Procházka beat skillful striker Volkan Oezdemir by knockout at their fun UFC 251 bout,and followed that up with a second-round knockout of Dominick Reyes in one of the most thrilling fights of 2021. For this, he earned a title shot against the aging Glover Teixeira.

While I appreciated the bodies of work produced by these two fighters, I wasn’t sure either deserved to be fighting for this title. This was Jon Jones’ title, a belt and a division that had grown long in the tooth during Jones’ decade-plus reign at the top. His successors Blachowicz and Teixeira were both old, the latter almost impossibly so. And Procházka was a gleefully strange punching bag, a man who kept his hands down, wore his hair in a samurai-style topknot, and used weird chakra-based wind-ups for his unorthodox, awkward strikes. This wasn’t going to represent the height of technical MMA, was it? That would be the sort of thing you’d get from Israel Adesanya at middleweight, Kamaru Usman at welterweight, or Alexander Volkanovski at featherweight—balanced fighters with exceptional skills in one or two key areas who followed optimal strategies to achieve victory against all opposition.

At best, I figured this would last two rounds. Either Teixeira would take down Procházka and pummel or submit him, or Procházka would knock out Teixeira, exposing the same chin that had proved suspect against Gustafsson and “Rumble” Johnson. I discounted Teixeira’s ability to withstand Thiago Santos’ punches because Santos, even if he had succeeded in knocking out Jan Blachowicz, was still just a smaller light heavyweight who had stopped cutting to middleweight.

That wasn’t how this went, and I’m glad of that. I expected a sprint and instead got to study a five-round war, with Teixeira controlling the pace early with some wrestling—and consistently taking down Procházka throughout the fight, a surprise given that even a superior wrestler like “King Mo” Lawal couldn’t—before making one of his many tactical mistakes that enabled the Czech fighter to get back on his feet. When Procházka was standing, at least through the first four rounds, he was hammering away at Teixeira. Teixeira snuck his offense in there, because he’s a capable boxer, and his better-than-average head movement—still a rarity in MMA, like checking leg kicks—likely kept him conscious. Each man had the other in trouble, and each failed to seal the deal.

The cuts and the blood were impressive. Way of the Blade author Phil Schneider would’ve found much to appreciate here, with both fighters leaking from deep gashes that painted each other’s torsos red while they were tucked chest to chest on the floor. The fifth round managed to do something that few sporting events have ever done—something that only actual combat, a true war to settle the score, can genuinely do—which is to lift my spirits. The ageless Teixeira had pulled ahead in this round, in a fight likely tied either 2-2 or up 3-1 (the judges’ cards confirmed both of these tallies). He had told his corner he was going to win—he remained so positive throughout the later rounds, so happy to still be imposing his will—and he began putting the finishing touches on the match not with his takedowns but with his hands. At one point, he had Procházka out on his feet, only to jump into a guillotine choke that, owing to sweat and blood, quickly came undone. From there, the two men traded position on the ground, with Teixeira always rolling back into a dominant position, always chasing a finish he didn’t really need yet sorely wanted.

Then, a mere 30 seconds from certain victory, Teixeira’s strength failed, Procházka took his back, and the Brazilian who’d been ageless for 24 minutes was now an old, beaten man for the remainder. The Czech fighter slipped his arms around the great jiu-jitsu player’s neck, squeezed with as much force as he could muster, and submitted the champion for the first time in his entire career.

In his post-fight interviews, Procházka was despondent, claiming he owed the fans a better fight and had many areas in which he wished to improve. Perhaps, but the bulk of his career has consisted of batshit crazy fights exactly like this. As much as he ties his success to The Book of the Five Rings and Japanese martial arts philosophy in general, he relies heavily on an ethnic trait about which my father never ceased to opine: the ability of Czechs and Slovaks to absorb a vicious beating for no apparent reason, whether on the college gridiron or when he was giving me and my brother the hidings of a lifetime. Procházka is awkward, seemingly quite clumsy, inelegant, and able to endure punishment on a colossal scale—an outsider martial artist who takes and gives everything on the chin. Had he been better, the fight would’ve been worse. Now, like Forrest Griffin after his bloodbath against Stephan Bonnar in the TUF Ultimate Finale or Chael Sonnen after he stupidly allowed Anderson Silva to submit him during their first meeting, Procházka need never worry about winning or losing again.