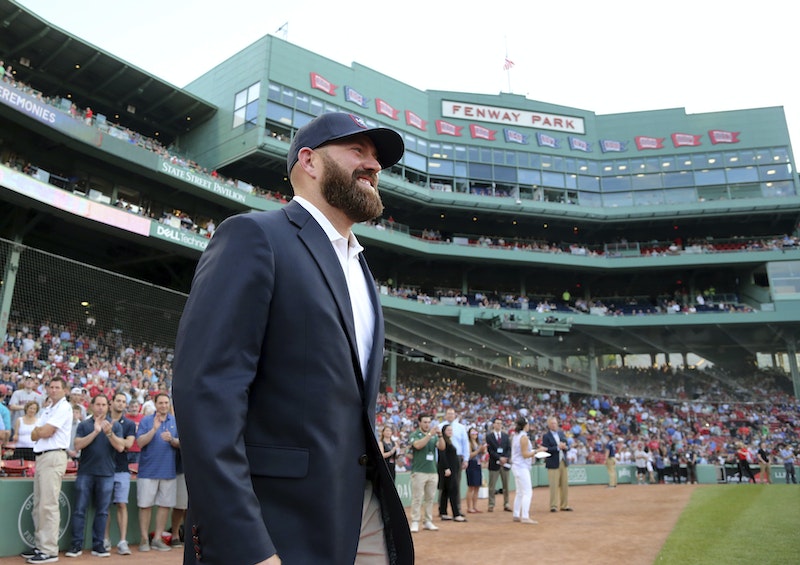 A third of this year’s MLB season is completed and what have you done for me, you under-achieving Boston Red Sox? The team’s finally hovering around .500, a minor miracle considering how many games its ramshackle bullpen has blown, and I’m still hopeful they might grab a Wild Card spot for October’s (stupidly) expanded playoffs. More on the Sox below, but first, I’m on the cusp of becoming a “woke” baseball fan, merely as an antidote to the all the moaning about politics sticking its nose into the sport.

Last week I read professor/author David Lewis Schaefer’s essay at Law Liberty about how the ongoing “woke culture” threatens baseball, and while I agreed with some of his points, it was a waste of my time. He focused on the Tim Anderson/Josh Donaldson flare-up a couple of weeks ago, for which the latter, now with the Yankees (I already couldn’t stand the lippy—not meant in the good Leo Durocher sense—Donaldson; as a “Yonkle,” he’s even worse) received a one-game suspension and fine for referring to the electric White Sox shortstop Anderson as “Jackie.” Anderson brought that on himself in a 2019 Sports Illustrated article in which he said he was the modern Jackie Robinson, and hoped to encourage young black athletes to play baseball. Suddenly, Anderson, some of his teammates and the Yankees brass were offended. It was silly and Donaldson didn’t deserve the label of a male Rep. Marjorie Taylor Greene just because he’s an asshole. But Schaefer lost me when he spent half of his article on Jackie Robinson and Brooklyn Dodgers’ GM Branch Rickey making history in 1947. I read a young adult book about Robinson (as well as Babe Ruth and Ted Williams) when I was seven; this isn’t fresh territory.

I’m no youngster, but Schaefer goes back further (he’s 79), demonstrated by this paragraph: “Most adults who, like the present author, follow sports at the professional, collegiate, or high school level do so as a diversion not only from their day’s work but from the typically more troubling events depicted on the daily newspapers’ front pages, or television or online news broadcasts. And young fans inevitably tend to regard their teams’ stars as role models. Should the grievance politics of Anderson and his apologists really be what we want our kids, of whatever race, to emulate?”

Two points: like Joe Biden (also 79, but I’m assuming Schaefer’s in better mental health), the Holy Cross professor doesn’t recognize that almost nobody even skims a daily newspaper’s front page anymore since all the “news” is out-of-date. That’s simply a fact, and I no longer lament it because there’s no return to a print/network nightly news world. Second, I doubt many “young fans,” at least those with a splinter of self-respect, “tend to regard their teams’ stars as role models.” I’ve followed baseball since the early-1960s, and not once did I think of a favorite player (Yaz, Tony Conigliaro, Johnny Unitas, Luis Tiant or George Scott, for example) as someone to emulate. They were gifted athletes whom I enjoyed watching or reading about in the sports pages.

As the “woke” incidents pile up, the less I care. (Although five Tampa Bay Rays refusing to wear “Pride” patches because it didn’t square with their religious views, was mostly shrugged off.) Like Schaefer, I think MLB Commissioner Rob Manfred is a weasel (my word, not his) in hock to the owners, who embarrassed himself last year by pulling the All-Star Game from Atlanta (but not the World Series!) because of perceived voter suppression in Georgia. I roll my eyes when run-of-the-mill Boston Globe sportswriter Peter Abraham calls Sox pitchers Chris Sale and Tanner Houck “selfish” for not getting vaccinated. I wish they would (so they could play in Toronto), but their decisions are none of my business. And I felt bad for Cardinals’ rookie Brendan Donovan when he was forced to apologize for tweets he posted when he was 14 that contained some homophobic slurs. Also, I agree with my friend/Splice Today contributor Tom Joyce when he wrote that Giants’ manager Gabe Kapler is a showboat for refusing to participate in the national anthem before games until gun violence is taken seriously in the United States.

Anyway, I don’t know if the Red Sox can go on a tear and make up some ground in the A.L. East, thus preventing a fire sale in mid-season. But even if they fall by the wayside, I’ll still watch the games and find something to capture my interest. Right now, I’m digging the “color” commentary on NESN from Kevin Youkilis, former Sox star at the plate and infield (traded to the White Sox in 2012 at the behest of the awful one-year Sox manager Bobby Valentine), who’s a lot more lively than the very dull play-by-play man Dave O’Brien. At first, Youk got on my nerves because he’s such a chatterbox—and often stepped on great Dennis Eckersley’s stories—who mainly talks about himself. But after a few games, I started to find him entertaining, as he’s self-deprecating (bald, lumpy body, terrible outfielder), and flips into stream-of-consciousness mode as if he’s at an open mic night at a comedy club. Youk, who’s part of a rotating group of O’Brien partners (Eck, the insufferable Kevin Millar and Boston talk-show host Tony Massarotti, who makes smart observations that don’t toe management’s line but is hindered by a hard-to-ignore whiny voice) is the best of the lot, save Eck, although all pale in comparison to the late Jerry Remy.

Youk wears a cap in the booth, but on occasion will toss it aside and put on a “rally bandana” if the Sox are in a tight game. It’s goofy, but his patter makes it work. Once O’Brien, asking what gift a player receives when named “MLB Player of the Week,” was kind of taken aback when Youk—I’m paraphrasing—said it was a mere watch. He implied it was a cheapie, since his brother is a jeweler and he had it appraised. “What can I say, I’m a Jew!” When O’Brien mentions any kind of food, Youk enthusiastically says, “Yes, I’m there.” Same with what are irritatingly referred to as “adult beverages,” as Youk enthuses about Mexico and bathing in one margarita after another. He’s joking, but it cracks me up, just as when he claims he’s losing his mind, trying to cover the Sox game while simultaneously following his kid’s Little League contest online. “I’m lunchmeat, Dave. There’s no cure.”