The Week in Fights #4

Mariusz Pudzianowski is no longer the world’s strongest man, but he’s still cashing checks in the MMA cage. 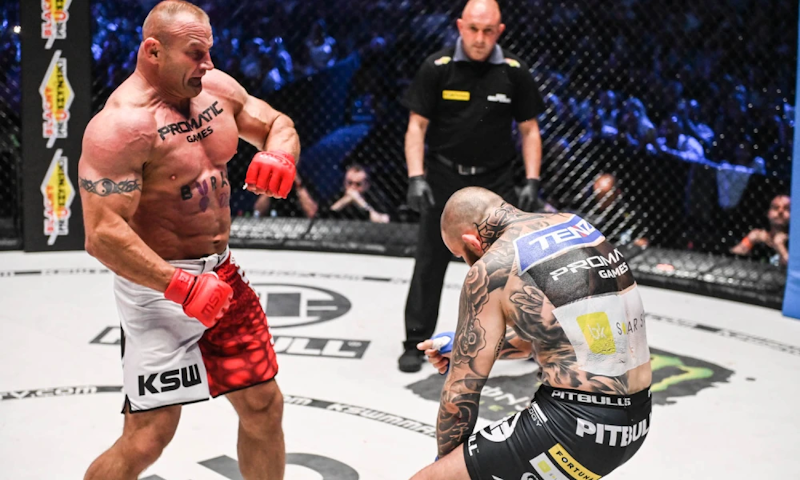 The promotion, which launched the careers of decorated fighters like former UFC light heavyweight champion Jan Błachowicz, has become increasingly professionalized in recent years. The meat of its roster remains heavily tattooed Polish meatheads, but only two of its eight current champions are natives of Rzeczpospolita Polska. The champions are a mix of seasoned veterans like English heavyweight Phil De Fries, a competent grappler who flamed out of the UFC, and rising stars like two-division belt holder Roberto Soldić, a 27-year-old Croatian who will surely be headed to the big leagues soon enough.

This is all well and good for a company that’s carved out a somewhat profitable niche, but KSW 70—main evented by company figurehead and five-time World’s Strongest Man Mariusz “Pudzian” Pudzianowski, with another heavyweight tilt as the co-main—represented a return to its freak-show roots. KSW can stage cautious fights between boring journeymen, but it’s these choice sides of prime beef that maintain the interest of fans like me.

Ricardo Prasel defeats Daniel Omielańczuk by submission (ankle lock, round 1): Omielańczuk is my favorite sort of boring heavyweight, a 6’, 260-pound grinder who went 4-5 during a four-year stint in the UFC from 2013 to 2017. Two of his four wins there came by majority decision, including an undeserved victory over submission specialist Aleksei Oleinik in which he distinguished himself by staying upright and un-submitted for three rounds as he kept belly-bumping the “Boa Constrictor” back into the cage. He had better luck during a four-year run in Chechnya-based Absolute Championship Akhmat (ACA), amassing a winning record, though he dropped a decision to pillow-fisted Iranian world champion wrestler Amir Aliakbari in his debut and then got cold-cocked by criminally underrated fatso Tony Johnson in a fight for the vacant ACA Heavyweight Championship.

Against Ricardo Prasel, he seemed like a safe bet—but only because I had followed Omielańczuk’s career in detail and knew nothing about Prasel, a 6’7” soccer prodigy who had played in the Chelsea organization before a hip injury and a growing interest in jiu-jitsu led him to MMA. The 39-year-old Omielańczuk, who looked burlier and almost assuredly more “juiced” on performance-enhancing drugs than he was during his UFC tenure, rushed and crowded Prasel, intending to take away his foe’s considerable reach advantage while staging the sludgy and boring bout that was his stock in trade. The 31-year-old Prasel, repeatedly referred to on the English-language commentary as a “rising young star”—only in a low-paying, still-immature sport like MMA can a man in his 30s be “rising” and “young”—grabbed an ankle and began wrenching it after he and Omielańczuk had hit the mat.

With undersized Croatian heavyweight Darko Stošić—another UFC retread—having already fallen to Phil De Fries, Prasel is likely the next man up to challenge the resurgent 36-year-old Brit, who hasn’t lost a fight since 2017 and has claimed some significant wins during that span. Prasel probably won’t beat De Fries, for whom KSW is surely the end of the line unless the PFL comes calling and he fancies his chances at the $1 million grand prize, but if this “young man” does prevail, the former goalkeeper has the size and backstory to warrant a look from the UFC.

Mariusz Pudzianowski defeats Michał Materla by KO/TKO (round 1): “Pudzian” has been a part of my life for decades, owning the World’s Strongest Man events that served as my late-night or early-morning filler on ESPN during the early-2000s before transitioning to an MMA career I assumed would be short-lived when I noted his early matches were against the likes of Japanese pro wrestler Yusuke Kawaguchi, Butterbean, and Bob Sapp—all men who had their moments in the sport but had since transitioned into the stage of their careers when they had no problem “jobbing” to opponents for a paycheck (something Butterbean more or less admitted to me when I interviewed him).

Yet the 45-year-old powerhouse has hung in there, helping steer the ship for KSW during its early days as he main-evented or co-mained dozens of cards. Drawing on a decent grounding in boxing, basic wrestling and judo training that took advantage of his huge size, and drug testing policies that are somewhere between lax and non-existent, Pudzianowski has scored decent wins over UFC veterans such as Sean McCorkle, Oli Thompson, and Rolles Gracie. He’s currently riding a surprising five-fight winning streak, claiming each victory by KO/TKO in highly entertaining “muscle matches” during which he lumbers forward and either cold-cocks his opponent or drags him to the ground and bludgeons him.

Materla was another interesting test, an ideal opponent for a monster in the permanent twilight of his second career. He had more fighting prowess than Pudzianowski, having held KSW’s middleweight strap until Roberto Soldić divested him of it, but he was also much lighter and weaker than a superhuman whose blood could perhaps double as testosterone cypionate and whose bones and organs had been so surfeited with growth hormone that they could qualify as “lab-grown.” And the fight, or what there was of it, reflected that disparity—Materla pawed at Pudzianowski, who somehow weighed in under the 265-pound weight limit, until the rampaging “Pudzian” could get close and strike him with slow, powerful punches, including the forearm-on-chin connection that sent the former middleweight champ to the mat.

Pudzianowski now sits third in KSW’s heavyweight rankings, though his past losses should surely disqualify him for an immediate shot at De Fries’ title. Instead, he ought to fight Darko Stošić, an also-ran in the UFC who has enough overall skill to drag “Pudzian” into deep waters and force his retirement. It could be another KSW main event hyped with a Grand Guignol trailer—as could the Pudzianowski fight after that, and the one after that, and so on towards the horizon for as long as the puissant Pole wishes to continue this.

Butterbean and Sapp, two men Pudzianowski beat handily in their own dotages, enjoyed MMA careers that far exceeded what anyone could have hoped from them, given the clay with which they’d been molded. About “Pudzian” one can say the same. Although he’d done more than his fair share in the cage, it’ll never be enough for freak-show fight aficionados. We always crave another round from these monsters.