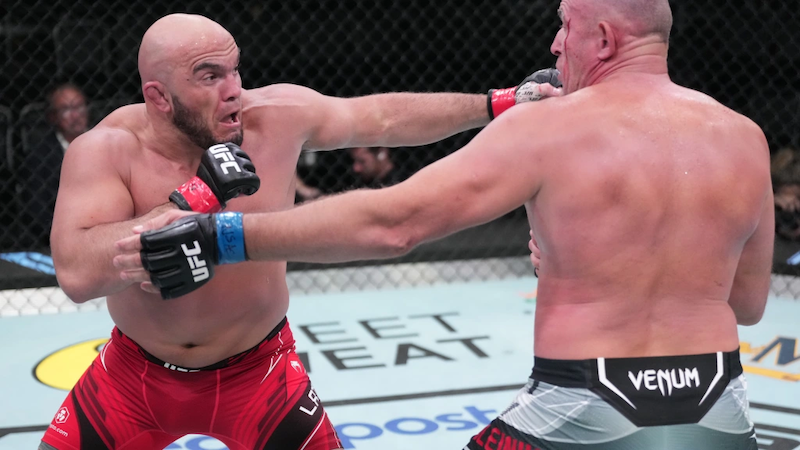 Aleksei Oleinik and Ilir Latifi entered their fight on last week’s UFC Fight Night having combined for 31 UFC fights and 85 total years of life. Inexplicably, this fight between near-greats, or at least solid contenders who’d headlined their own Fight Nights, was consigned to the prelims. This amounted to wastebasket treatment on such a weak card, but the UFC is surely sending these men a message: you aren’t what you used to be.

Their bodies tell the tale. Latifi, who’d leave the fight 10-6 in the Octagon but without a contract guaranteeing him any future fights, had gone from a ripped if slightly undersized light heavyweight—the kind of badass who’d step in on short notice to main event a fight against Gegard Mousasi for his first UFC contest—to an extremely undersized heavyweight with T. Rex arms, Ninja Turtle trapezius muscles, and abdominal muscles seared into his belly fat. Oleinik, who was fighting at middleweight in the early-2000s, was never a finely conditioned specimen, but in recent bouts his love handles and labored breathing have become hard to ignore.

Between the two of them, they’d claimed a number of notable victories. By virtue of his two decades in the business, Oleinik had 60 of those, with names like Mark Hunt, Jared Rosholt, Mirko Cro Cop, Fabrício Werdum, and Ronda Rousey’s husband Travis Browne dotting his CV. Latifi had schooled Sean O’Connell, Gian Villante, Tyson Pedro, and Ovince Saint Preux around all of their respective primes, then seized his first win at heavyweight with a wrestling-heavy victory over promising Canadian striker Tanner Boser. Both Latifi and Oleinik gave hard-hitting Derrick Lewis all he could handle; Oleinik nearly finished the big man with a scarf hold in the first round, only to be doomed by the bell and then knocked out in the second, and Latifi took Lewis down several times en route to a boring decision loss in which he was barely damaged.

To his credit, Oleinik will fight anyone the UFC puts in front of him—but he won’t fight them particularly hard if the deck is stacked against him. He has appeared to lay down or quit in some fights, memorably retiring while still on his feet in an unwinnable encountered Curtis Blaydes. When facing a flurry of strikes, as thrown by Chris Daukaus, Alistair Overeem, or Walt Harris, he merely shelled up and gave up, surviving to fight the other day. When his opponent could legitimately out-wrestle him and also cancel out his submission game, as in a decision loss to surging Moldovan Sergey Spivak, he was perfectly happy to lay on his back and minimize damage for three rounds while poking around for one of his signature tricky submissions.

While not as strong as Spivak, Latifi was a decorated Greco-Roman wrestler and strong enough in his grappling to have participated in the Abu Dhabi Combat Club Championships. He had power in his hands, at least against the assortment of mid-tier light heavyweights he “laid among the swee’peas,” and power in his legs, having destroyed the ring in which he and Blagoy Ivanov were fighting when he drove Ivanov—combat sambo conqueror of Fedor Emelianenko—into one of the posts, causing it to collapse.

The match unfolded as expected. Having each weighed in at well over 250 pounds, the fighters moved at a snail’s pace. Oleinik used his 80” reach to throw looping punches that can occasionally knock out an unwary opponent but are more often used as entries for takedowns. Latifi responded with slow jabs and hooks, his reach seeming considerably shorter than the 73” he’s officially credited with, while mixing in three takedowns that enabled him to control Oleinik for the bulk of the fight. This is an old script with Oleinik, who can throw and drag from his feet but is otherwise content to hunt for an Ezekiel choke from the bottom, a hold that consists of pressing the opponent's trachea or the carotid arteries, reducing the oxygen flow in the process. He has submitted two opponents with Ezekiel chokes in the UFC—nobody had secured a finish with that choke in the organization prior to his finishing Viktor Pešta with one in 2017—so it’s not a long shot, but Oleinik was now 17 fights into his UFC career and nothing he did seemed particularly unexpected anymore, not even the Ezekiel chokes. He was who we thought he was: an old man who could submit poorly-conditioned fat boys and ill-trained novices, the very model of a gatekeeper.

For Latifi, as for Sergey Spivak, Jeff Monson, Chael Sonnen, and the various other top-notch wrestlers who’ve beaten Oleinik, it was merely a matter of taking the Russian-identifying Ukrainian down, then maintaining shoulder pressure from the top while giving him no big movements with which to work. As decision-hunting strategies go, this one isn’t bad, helped along by the fact that Oleinik bleeds as easily as anyone in the sport. Despite receiving what amounted to patty-cake damage from Latifi, Oleinik exited the fight looking like one of those Ukrainian prisoners of war whose detention the long-time Putin supporter surely condoned (“the current government of Ukraine is trying to eradicate the Russian language,” he once remarked by way of justifying the 2014 seizure of Crimea).

After securing the decision, Latifi gave a lengthy, heartfelt, and thoroughly confusing post-fight interview. He mentioned that he was still pursuing a championship, then immediately switched gears to discuss how badly his body had been injured over the years, how everyone who enters the Octagon is a hero, how Oleinik is a legend, and so forth. Finally, he seemed to indicate that, absent a UFC contract extension and seemingly “tired AF,” he was calling it a career. But was he?

Latifi and Oleinik, who is now 9-8 in the UFC after the loss, are the sort of fighters it’s easy to forget. Oleinik, at least, has his unique submission victories, but he looks nothing like the well-built heavyweight who knocked out promising collegiate wrestler-turned-fighter Jared Rosholt back in 2014, derailing Rosholt’s career for good. Latifi always had his own momentum nipped in the bud: he lost his short-notice main event debut fight to Mousasi (how could he have won that?) and, despite amassing strings of wins between then and now, he’s better remembered for the flash knockouts he’s suffered. Future light heavyweight champion Jan Błachowicz turned out his lights in 2014. Future Bellator double-champ Ryan Bader shut him down with a knee in 2016.

What, then, are we to think of the legacies of such “punch-me, pay-me” fighters? They held their own, they won more often than they lost, and even some casual fans might vaguely recall their names. But is that enough? I don’t know. I used to think that if I could write for such-and-such publication or make a certain dollar amount from writing, I’d have made it; I’d have succeeded. But all I’ve done with my writing is earn a living, which is all Latifi and Oleinik have done with their fighting. This is as uninspiring as it is improbable. All we ever got were jobs doing what we loved, jobs that paid us—paid us well at times!—yet never really paid us back for our love.