Yoel Romero ensured that Melvin Manhoef did not go gentle into that good night. 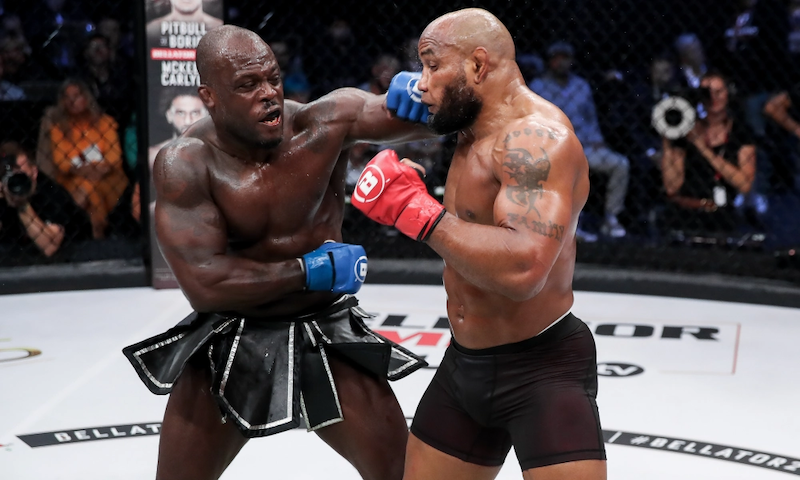 The great kickboxer and mixed martial artist Melvin “No Mercy” Manhoef, a thickly-muscled 5’8” bundle of fast-twitch knockout power, spent his entire combat career killing or being killed. If he wasn’t turning on his opponent’s black lights, he was sent to slumberland. The final fight of his MMA career saw him slept by vicious ground strikes from Yoel Romero.

Bellator, which staged this particular brawl for it all, continues to prove there’s at least one country for old men with big names: Manhoef is 46, Romero a year younger. Neither looked his age, as Manhoef came into the bout as well-conditioned as a 5’8”, 205-pound man of his vintage can probably get, and Romero…well, as regards the superhuman physique of the Cuban star—a silver medalist in freestyle wrestling at 85 kilograms in the 2000 Summer Olympics—“whereof one cannot speak, thereof be silent.”

Although Manhoef was clearly the underdog, the match—which had been discussed for some time—made perfect sense given that neither fighter does. “No Mercy” exploded on the scene and has knocked out the best of the best, most notably the worn-out shell of the once-great Kazushi Sakuraba in 2008 and then granite-jawed “Super Samoan” Mark Hunt in record time (18 seconds!) later that year. But he’s better known to fans for losing wild brawls to the likes of Robbie Lawler during Lawler’s remarkable Strikeforce resurgence and getting submitted by anyone with any grappling skills whatsoever.

Romero, by contrast, is both an ageless wonder and someone who never fulfilled his incredible potential. His career has involved brilliant stoppages of many of the UFC’s all-time great middleweights—Luke Rockhold, Lyoto Machida, and Chris Weidman were rather ostentatiously “laid among the swee’peas” during his rise through that company’s ranks—as well as bad decision losses, questionable and often strangely passive fighting strategies, weight-cut failures, and a ridiculous TKO win over Tim Kennedy in 2014 in which confusion over the amount of vaseline applied to Romero’s face bought him the precious seconds he needed to recover from a second-round barrage during which Kennedy, who was illegally holding Romero’s glove, beat the stuffing out of the Cuban star.

I expected little from Romero’s Bellator run at light heavyweight, given that he’s only 5’10” and on the bad side of 40. His first match in the promotion, against the impossible-to-hurt “Mr. Wonderful” Phil Davis, proved to be another cautious victory for Davis. After the fight, Romero claimed he’d been doing little in the way of striking or grappling because he thought it was a 5-round fight, not a 3-rounder. This statement did nothing to renew my confidence. Additionally, even though Romero looked muscular and wide at 205, the taller and bigger Davis—merely a great collegiate folkstyle wrestler, albeit one who has integrated wrestling into his MMA as well as anyone in the sport’s history—sonned the Olympian in all their wrestling exchanges. Romero, it seems, had become a true one-trick pony, a man who preserved his wind for a couple explosive movements each round and relied on his elite wrestling merely to stay upright.

Romero surprised me in his second Bellator match, though. Pitted against Alex Polizzi, an NCAA wrestling tournament qualifier at 197 pounds for Northwestern in the early-2010s who was stepping in for an injured Manhoef (this was to be their initial clash), I expected Romero to receive a sign that he should step aside. Polizzi entered with only a decision loss to Julius Anglickas, another solid if unspectacular wrestler, marring his otherwise-perfect record, but he’d demonstrated a well-rounded set of skills during a 3-fight winning streak that saw him coming back to submit the strong striker Jose Augusto (who gave Anthony “Rumble” Johnson fits) and scoring a decision win over Grant Neal, a squat powerhouse and one of the better wrestling-biased fighters in Bellator. Polizzi, I assumed, would test Romero and probably find him wanting. Would the “Soldier of God” even exert himself offensively at this point?

I was wrong. Romero looked as good as I’ve ever seen him, out-striking and—perhaps more importantly—out-wrestling Polizzi throughout the match, and then knocking him out with exactly one second left on the clock in the third round. The whole thing was so easy, so perfectly-paced, that it appeared as if Romero had timed it out. And perhaps he had; Romero was capable of beating or losing to anyone on any given day, depending on the vagaries of his erratic mind.

Against Manhoef, Romero looked as good as I’ve ever seen him at 205, still moving in that fast-twitch style but now carrying a Ninja Turtle shell of muscle across his back. When the match began, I assumed Romero would try to trade hands—that was the easiest thing to do—but he surprised me yet again, following the book on Manhoef and taking him down as soon as the opportunity presented itself. As always, Manhoef presented little resistance while Romero maneuvered around him on the mat. The second round offered more of the same, with Romero easily controlling Manhoef. In the third, as if working against some internal clock, Romero again grounded Manhoef and pounded him out with a little under 90 seconds remaining in the fight. The ground and pound from Romero was so effortless in this fight—admittedly against a one-dimensional striker whose Achilles’ heel was his grappling—that it made me wonder how things might have gone had the Cuban fighter invested more time in preparing to take Israel Adesanya off his feet in an uneventful UFC middleweight title fight that Romero, by virtue of scoring the more impactful strikes, already had at least some arguable claim to having won.

When the match ended, Romero claimed he was the best middleweight in the world in spite of now being armored in 205-plus pounds of muscle so tight and thick it would seem impossible to strip away. It was a strange claim, but given that “the Human Cheat Code” Johnny Eblen—a good collegiate wrestler and an improving striker—now lords it over that division in the wake of a surprisingly conclusive thumping of Gegard Mousasi, this might represent Romero’s last best chance of claiming gold. Failing that, a match between Romero and Mousasi—who also owns a victory over Melvin Manhoef—would be intriguing, particularly because Mousasi was one of the few high-profile UFC middleweights Romero didn’t vanquish during his run there.

As for Manhoef, what else can be said? The man knocked out 29 of his 32 opponents in MMA, was knocked out seven times, and was submitted seven times. Only five of his 51 matches went to a decision. Factor in a kickboxing career that featured at least eight losses by knockout and you’re talking about one very battered cranium—yet Manhoef still picked himself up off the mat, as he has many times before, and proceeded to deliver a very sincere retirement speech, thanking the fans for all the fun he had in a sport he loved, while we viewers at home marveled over how much larger former LA cop and MMA referee “Big” John McCarthy is than everyone he interviews (note to MMA promotions: consider sending out your smallest person, ideally Laura Sanko or Dom Cruz-sized or below, to make everyone else on the roster look more imposing; enough with McCarthy in Bellator and bloated, button-busting Daniel Cormier in the UFC manhandling everyone).

It was a sad but fitting way for Manhoef to conclude his career. He was a “two true outcomes” brawler—either the opponent goes down or he does—and he remained faithful to that approach until the curtain fell, a moment which was neither bitter nor sweet. It was merely the end of the line for one of the early-21st century’s most ferocious warriors, even as one of its most eccentric indicated he might fight forever.