The Week in Fights #8

The end of one era and the beginning of another. 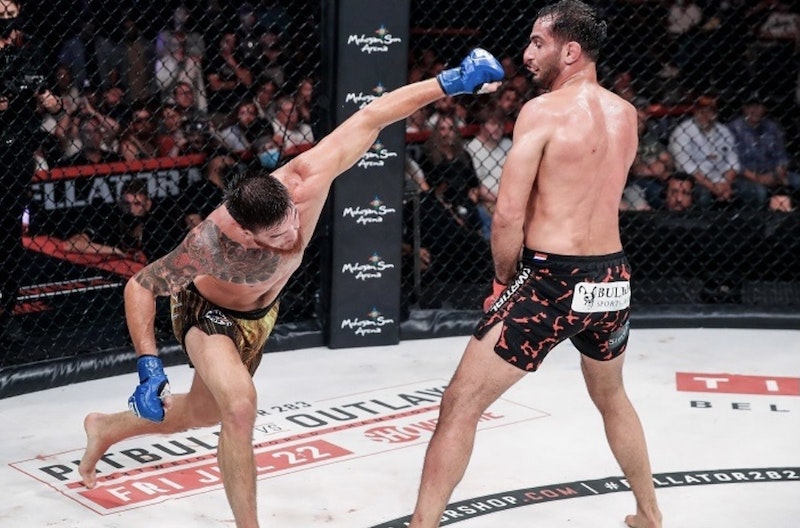 When the end comes for a fighter, it comes quickly. “The end” might not mean the end of a career, but it does mean the end of his or her relevance. Like when Jon Jones dominated Maurício Rua before knocking him out in the third round of UFC 128, seizing light heavyweight gold and staking his claim to that division for the next decade. Rua kept fighting in the wake of the defeat, losing about as often as he won, but the bell tolled that night in March 2011 for an elite fighter already on thin ice in a promotion that, unlike PRIDE, didn’t allow soccer kicks to the head. So it went last week for another all-time great.

Johnny Eblen defeats Gegard Mousasi by unanimous decision, Bellator 282: Gegard Mousasi seemed as elite as any middleweight fighter with no legitimate claim to GOAT status could hope to be. Over his previous eight fights in Bellator, he had gone 7-1, his only defeat a boring tactical loss to overpowering jiu-jitsu specialist Rafael Lovato Jr. at Bellator 223 in June 2019. After regaining the strap in the wake of Lovato vacating it due to retirement, Mousasi beat everyone in humiliating fashion, decisioning all-time near-greats Lyoto Machida and Douglas Lima before knocking out veteran submission wrestler John Salter and then absolutely humiliating Austin “Mr. Paige VanZant” Vanderford in a memorable beatdown.

Johnny Eblen, a red-headed Missouri native nicknamed “the Human Cheat Code,” hadn’t blown me away on the way up the Bellator middleweight rankings, but how could he? That division’s in sorry shape, with many of the top challengers of the past half-decade inflated welterweights such as Lima and Rory MacDonald. His match against John Salter was a snoozefest: Salter and Eblen both wrestled in college, but Eblen knew he was the better wrestler and out-wrestled Salter for 15 tedious minutes. Eblen was putting guys away, but it was hard to tell if he was any better than Vanderford, who also entered his bout with Mousasi sporting an undefeated record.

Mousasi, meanwhile, had seemingly represented the MMA state of the art for as long as that art had existed in its modern form. Across a major-promotion tenure that started in PRIDE, went through Dream, and saw him holding the Strikeforce Light Heavyweight Championship, Mousasi beat a who’s who of top stars: Melvin Manhoef, Ronaldo Souza, Héctor Lombard, Ovince Saint Preux, and even heavyweight Mark Hunt all lost to him before he arrived in the UFC.

In the UFC, he lost only three times—a decision loss to Lyoto Machida that he’d avenge in Bellator, a submission loss to Ronaldo Souza that evened their series at 1-1, and a frequently-replayed highlight-reel flying knee knockout loss to Uriah Hall, who never lived up to the marketing hype that victory inspired (and was finished by Mousasi in their UFC Fight Night rematch). Along the way, he battered everyone else: Chris Weidman, Dan Henderson, Thiago Santos, and Vitor Belfort were all finished by Mousasi. When time came to resign his contract, though, the UFC lowballed him and Bellator dangled the prospect of bigger checks. The UFC’s middleweight division was gradually replenishing itself; Bellator’s was a blank slate. Mousasi made the smart move and took the good money.

The book on Mousasi was well-established: he possessed high-level striking, could stand up when taken down, had a black belt in judo, and knew enough jiu-jitsu to protect himself on the ground. He was a complete fighter, perhaps as complete as anyone in the sport during the mid-2010s. But Eblen demonstrated how the “game done changed” when the “Human Cheat Code” entered the cage and began jabbing a flat-footed Mousasi right in the face. Mousasi had reason for caution, rightly fearing the takedowns that Eblen—a better collegiate wrestler by far than Vanderford—sent his way.

In short, Eblen, whose striking had proven serviceable in knockouts of Collin Huckbody and Daniel Madrid, was now confidently marching forward and jabbing much in the manner of Sean Strickland—that is, if Strickland had a collegiate-level wrestling base and wasn’t a trash-talking asshole. Strickland, who sparred with Eblen during his preparations for the Mousasi fight, praised the wrestler’s work at a media event for the upcoming UFC 276 pay-per-view where Strickland will fight Alex Pereira for a shot at the UFC’s middleweight title.  As unlikeable as many find Strickland—I happen to enjoy his abrasive presence on social media, and his stream-of-consciousness interviews are characterized by the spastic movements of someone who was every bit as abused as he claims—the simple strategy of sparring a lot and then continuously pressuring forward in the cage behind a jab appears to constitute a major innovation in a still-primitive sport, something that can uplift the game of fighters who’d otherwise be doomed to remain hesitant also-rans.

Where does this leave these two men? Eblen seems to be on the cusp of a bright future. He was a good wrestler at the University of Missouri, a very strong wrestling program, and would likely present challenges in a UFC middleweight division that’s light on wrestlers. On the other hand, he’s no physical specimen on the order of Israel Adesanya or Jared Cannonier. He’s probably got a ceiling somewhere north of Derek Brunson, another UFC middleweight with a wrestling base who can throw hands. Vanquishing a legend like Mousasi required flawless focus and conditioning—two things that have cost Brunson in big fights—so Eblen may already be a step ahead of Brunson. He needs to add muscle, though, and appears to be doing so.

Mousasi, meanwhile, has surely hit the end of the line. You could rematch this fight because Bellator’s middleweight division is so depleted, and Scott Coker probably will. But if both men enter the cage the way they did at Bellator 282, the result ought to remain the same. On that night, Mousasi couldn’t have beaten Eblen short of shooting him at point-blank range; not a single exchange favored the former champion.

Mousasi does, however, deserve to get his 50th win, an amazing accomplishment in his case given that he’s earned nearly all of them at the highest level. He has a few fights left on his Bellator contract, so besides rematching Eblen, he can hopefully get around to crushing some other big-name veterans before he goes. “So while you’re in it, try to get as much shit as you can, and when your run is over, just admit when it’s at its end,” rapped the venerable Eminem, and Mousasi, ever the pragmatist, surely understands this as well as anyone.