Hunt and Goodridge bled for their fame. 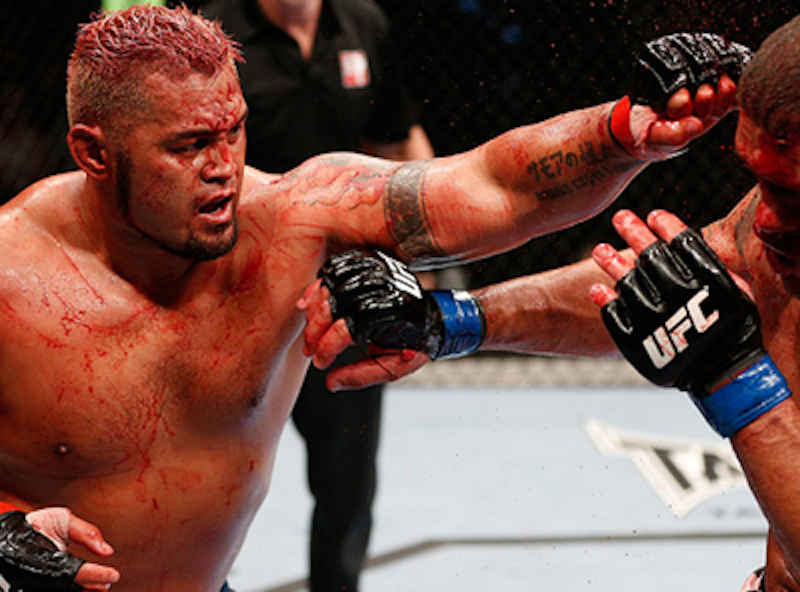 I read autobiographies primarily to discover new stories of extraordinary suffering, which our society classifies as “abuse” and considers beyond the pale. I prefer the autobiographies of athletes—wrestlers and fighters and so forth—that are unexpurgated, that aren’t intended as public relations vehicles for the author. I want to learn more about abuse, because I endured plenty of it myself, and it helps to know that I’m not alone. Mind you, none of us are alone in our suffering, but many don’t realize that until it’s too late.

Mark “Super Samoan” Hunt and Gary “Big Daddy” Goodridge, two granite-chinned MMA palookas of the highest order, have worked with capable co-authors to share the stories of their many beatings. Hunt’s Born to Fight and Goodridge’s Gatekeeper are unembellished accounts of the careers of powerful, free-swinging could-have-beens who, but for lackadaisical training regimens and strategic miscalculations, almost were.

Goodridge had a brief run in the late-1990s as a top fighter after a stint as a champion armwrestler—he holds several wins over the legendary John Brzenk—but age and poor conditioning turned him into a perpetual “opponent,” losing to the best of them while developing CTE as a result of all the blows he ate. Mark Hunt was one of the guys who beat Goodridge, even if neither man was in shape for that particular fight. Hunt is big and sloppy-fat, a far less intimidating specimen than the thickly-muscled “Big Daddy,” but he’s also a ferocious puncher with otherworldly knockout power.

Goodridge and Hunt started fighting later in their lives, and both eventually ran out of steam. Goodridge hasn’t fought since 2010, ending his career with a 20-fight losing streak across K-1 kickboxing and various MMA federations. Hunt, who has taken to complaining about performance-enhancing drug use by his opponents, was soundly thrashed in a recent fight with notorious PED user Alistair Overeem.

The future for neither man appears bright. Goodridge walks around in a fog, his brain addled by too many power punches from opponents like Hunt. Hunt says he’s okay, at least for now, but he lost hundreds of thousands of dollars to a video poker addiction that consumed his winnings from the K-1 circuit, where he was once an unlikely Grand Prix kickboxing champion.

What makes a person willing to endure repeated thrashings? What early-life circumstances create such endurance? The two men are frank about their upbringings. Goodridge, who immigrated to Canada with his Trinidadian parents when he was a little kid, was forced to sit and listen for hours while his creepy father described a bunch of lurid sex acts. Hunt, born in New Zealand to Samoan parents, had it even worse: his old man molested his sister, eventually impregnating her, and pounded him and his brothers with closed fists until the unexposed parts of their bodies were covered in welts and bruises.

Such treatment destroys self-esteem, but it also eliminates a great deal of fear, or least numbs one to its presence. Hunt notes that attempts at bullying by classmates and teachers made him laugh, since he knew that the ass-kickings he received at home put this amateur-hour abuse to shame. Neither Hunt nor Goodridge harbors any great dreams of rags to riches success, with both spending money as fast as they make it. For each man, there’s always another fight, another chance at redemption. They subscribe to the notion that anyone could go down for the count if they expose their chin, and their matches are built around achieving these crowd-pleasing kayos.

Unafraid of hurting or losing, Goodridge and Hunt would throw themselves behind their punches and into their work. They introduced opponents to the black lights, secure in their knowledge that a perfectly-timed uppercut could spell the difference between victory and defeat. That is, until the punch counts piled up and the numbness wore off. Goodridge experienced it first, starting sometime after his flash knockout victory over washed-up ex-UFC champion Don Frye in 2003. Not long after this career highlight, the lobes of his brain started to feel like they were sloshing around inside his cranium. His body refused to move the way he wanted it to; his aches and pains wouldn’t heal. So, like boxer Mike Tyson and fellow K-1 competitor Bob Sapp, Goodridge lost his edge, absorbing hard hits and collecting paychecks. He became a tomato can, fighting to lose to anyone willing to meet his contractual terms.

Mark Hunt has lasted longer and had a better career. In the conclusion to Born to Fight, he puts a positive spin on the pummeling he received at the hands of current UFC heavyweight champ Stipe Miocic. However, subsequent fights against Brock Lesnar and Alistair Overeem, which he lost in humiliating fashion to these two juiced-up opponents, appear to have shattered his previously unshakable confidence (Lesnar actually tested positive for estrogen blockers, so that fight became a no-contest on Hunt’s record). The natural man who could punch out any opponent at any time, without training a lick, couldn’t overcome unnatural opponents.

One of the big myths perpetuated in our success-obsessed culture is that a hard upbringing forges a hard person. Rags precede riches and heroes emerge from humble circumstances. I know that this is untrue. When overcome by violent mania, my father, a Golden Gloves boxer, thought nothing of putting his ample belly behind a wide-arcing hook and turning on my black lights. Struck cleanly on the chin, my head would snap to the side, rattling my brain inside its brainpain. A quick flash of darkness would overtake me, as if the old man had tapped the reset button on a Nintendo. Time would be suspended until the image of life flickered back onto the screen.

Getting the shit kicked out of me didn’t make me a better person, a tougher person, a smarter person. It just made me a person who could take a beating—a person for whom a beating is second nature—and what good is that, in a world that loves to chew up people and spit them out? Hunt and Goodridge bled for their fame, such as it was, but only their published autobiographies will keep them from being struck dumb.