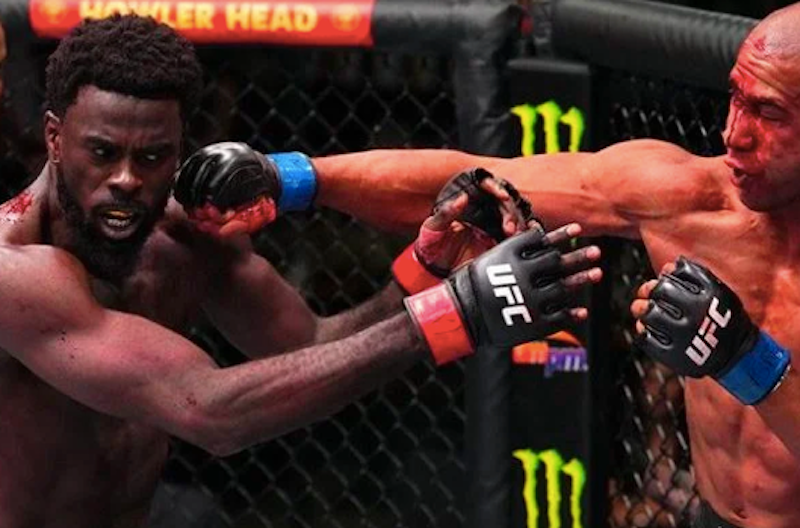 Who doesn’t love a zombie fighter? Certainly filthy casuals don’t, and since I’m not exceeding 100-plus hours of streaming combat sports content consumption per month, I count myself among their ranks. “Korean Zombie” Chan Sung Jung is the standard against which all latter-day zombie fighters are judged—minimal head movement, straight-ahead pressure, flat-footed stance, varied but oddly ham-fisted and disjointed skills—and Gregory “Robocop” Rodrigues fares exceedingly well by that comparison. Rodrigues, who endured a hellacious knee to the forehead from Chidi “Bang Bang” Njokuani yet came back to finish his rangy opponent in the “fight of the night” at last week’s UFC Fight Night, gave a rather Socratic answer in his post-fight interview, which can be summarized as “You can kill me, but you can’t harm me” combined with the promise that his opponent is going with him if and when he goes down. So far, plenty of people have harmed the robotic Rodrigues, a powerful striker and elite grappler who manages to look awkward and imperiled under all circumstances, including prevailing ones.

Nevertheless, only one man has beaten Rodrigues in a UFC ring—35-year-old Armenian kickboxer turned MMA fighter Armen Petrosyan—and he did so via a controversial split decision that most media outlets gave to Robocop. A few fights prior to that, Robocop had been surprised in the first round on Dana White’s Contender Series by Jordan Williams, a courageous former college wrestler saddled with Type-1 diabetes whose middleweight career never really took off because he wasn’t ever healthy enough to undertake a proper weight cut.

It could be said that both Petrosyan, who was later manhandled by smooth-talking Brazilian prospect Caio Borralho in a unanimous decision win, and Williams, who lost all three of his UFC fights in convincing fashion, never quite recovered from the punishment Rodrigues inflicted. He rarely out-strikes his foes, but when he hits them, it hurts—a lesson learned by slick Korean striker Junyong Park, who battered Rodrigues for much of their exciting back-and-forth encounter before Robocop rallied to finish him, as well as dimming prospects Duško Todorović and Julian Marquez, who were squashed with relative ease.

Chidi Njokuani, like Junyong Park before him, seemed to have this fight well in hand—much like his rising MMA fortunes. Although his early career at welterweight followed a similar up-and-down trajectory as his brother Anthony’s has at lightweight, he finally seemed to be coming into his own at 185 after suffering initial setbacks against top Bellator middleweights John Salter and Rafael Carvalho. His UFC tenure started with a “bang bang,” a technical demolition of Mário Sousa on the Contender Series followed by finishes of always-game Marc-André Barriault and Duško Todorović. Chidi had the look—how this man made welterweight was a mystery, given that his cut to middleweight is nearly to the bone—as well as that uncoachable, untouchable 80” reach. Perhaps he could rattle off a run similar to what Jared Cannonier had put together, in the process earning his chance to job to Israel Adesanya (who is gifted with that selfsame 80” reach and far, far more) like every other semi-major player in the division.

Poor Chidi! The 33-year-old’s skills had blossomed since that cool November night in Oklahoma when submission wizard John Salter choked him out, but against a zombie—an honest-to-goodness zombie, an absolute kill-or-be-killed monster—all bets are off. In the first round, Chidi hit a diving Rodrigues with the aforementioned knee to the forehead, a shot little different from the one that “Street Jesus” Jorge Masvidal used to put out Ben Askren’s lights and more or less conclude that curly-haired Olympian slob’s stint as an unlikely world-beater. It was harder than anyone else had ever hit Rodrigues, leaving him dizzy and hurt and giving him—in his words—a “third eyebrow” of an incision situated slightly above the other two. As blood gushed from the wound, Chidi beat Robocop like the proverbial government mule, but it proved to be a Homer Simpson beating, the kind that exhausts the beater more than the beaten.

By the end of that first round, Rodrigues had recovered and was beginning to hurt Chidi with those slow, straight punches of his that look like something from a Rock’Em Sock’Em Robots set. In the second round, when a winded Chidi assumed the posture of a beaten man, Rodrigues knew he had him. As he explained at the press conference afterwards, “I felt he was tired. I felt his breath and it was different, and I said, ‘Oh man. I’m the ‘Robocop’ and I’m here, so now I’m going to kill you.’ And then I started to feel him, so when I grabbed him against the cage with the clinch—the takedown I did—I felt his body was a little bit weak and then I took him down and said, ‘Now, I’m going to finish the fight.’ And then I did.”

This is among the most beautiful improvised narratives that MMA can deliver: the comeback against not just long odds but the longest odds, accomplished through sheer force of will, through “feeling his breath was different” and then biting down on the mouthpiece and preparing to switch on the other man’s black lights. For those of us who’ve enjoyed such a comeback, whether in the arena of sports or the arena of life itself, the vicarious feeling from a fight of this magnitude is akin to a contact high from a beloved drug to which we were once hopelessly addicted. For those who haven’t, here’s a chance to “ecce homo”—behold the man—as he does the most thrilling thing any human can accomplish: prevailing by the skin of his teeth, because he’s simply too stubborn, too stupid, too human, all-too-human, to go out like that. As my father used to say, “I ain’t going out like that” is the refrain of the damned and the redeemed alike.

Gregory Rodrigues could fight anyone now, so book him against the cautious Fight Nerds prodigy Caio Borralho, the man who vanquished Rodrigues’ ostensible conqueror Armen Petrosyan, and see what happens. Goad that 29-year-old rising star into the kind of fight he seems unwilling to give Dana White. “How much can you know about yourself if you’ve never been in a fight with a zombie?” After all, even if you kill Rodrigues, with him being the sort of man he says he is, you won’t injure him so much as yourself.