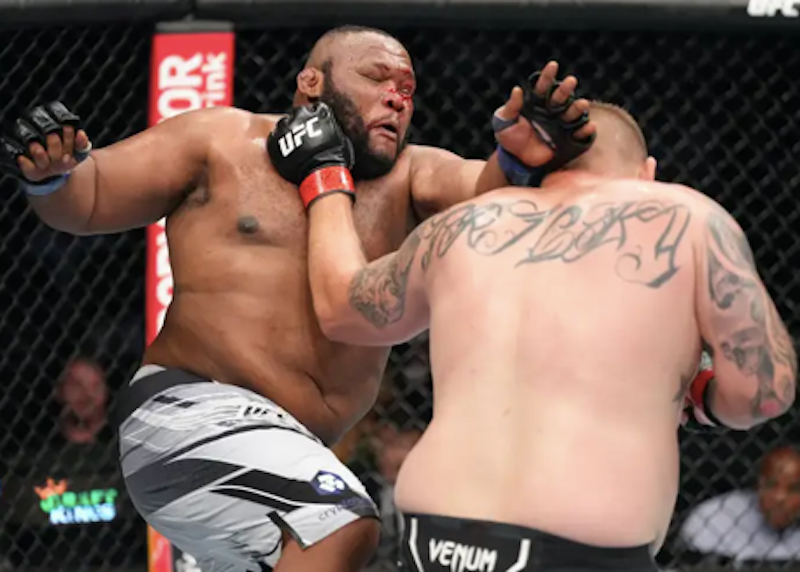 Sometimes the best fight on a card also happens to be the last fight, the main event—but not always. Certainly not at UFC 279, when Khamzat Chimaev’s decision to stop cutting weight led to him being cut out of a main event slot and handed a match against Kevin Holland, his surprising fight week rival and an opponent well-rounded in all areas except Khamzat’s wheelhouse, wrestling. While that turned out to be a quick fight, ending with Holland tapping to a D’arce choke, it wasn’t a good one. Nor was the Nate Diaz-Tony Ferguson tilt that became the main event; Ferguson now has that weird CTE-abetted sluggishness to his movements that eventually brought Donald Cerrone’s career to a close, and Diaz’s spectacular guillotine choke was more of a highlight-reel mercy killing than anything else.

There were, to be sure, a lot of fun finishes on this card. Irene Aldana’s upkick to the liver ended the night for Macy Chiasson, a boring grinder who came in heavy and was blanketing her more svelte opponent until Aldana did the unthinkable. But that was merely an interesting end to an uninteresting fight; the same went for Johnny Walker reviving his career by submitting Ion “Hulk” Cutelaba in a match for which Cutelaba, tiny next to the behemoth 6’6” Walker, was inexplicably the heavy betting favorite. Middleweight Russian striker Denis Tiluliulin, who doesn’t mind giving a significant strike to land one, beat the hell out of a passive Jamie Pickett—nothing to see there, either. Jailton Almeida, ripped to the bone and primed for competition in a hypothetical 225-pound division between light heavyweight and heavyweight that doesn’t exist, did to lean Anton “Pleasure Man” Turkalj what he did to tubby Parker Porter in his last outing: absorbed zero strikes, took his foe down, and choked him out. QED.

That’s how this sort of thing goes; it is what it is and all that jazz. But the real highlight of the night was a “hoss fight” between Jake Collier, a man who’s traded wins and losses during a UFC career that saw him go from shredded middleweight to lineman-sized heavyweight, and Chris “Beast Boy” Barnett, a 5’9” beer barrel filled to the brim with exuberant aggression who started his career in the XFC as a 320-pound super heavyweight and missed the 265-pound limit for this fight, coming in at 267.5 pounds (he was surely north of 290 pounds when they met in the octagon).

This was great matchmaking. Collier’s a serviceable heavyweight who mostly beats the guys he’s supposed to beat (like Chase Sherman), loses to the ones he’s supposed to lose to (Tom Aspinall), and takes bad decisions along the way (he deserved to be on the right side of those split decisions against ageless Andrei Arlovski and jelly-bellied Carlos Felipe, the world’s least well-built PED user). Barnett, meanwhile, is an amazing interview, a man with WWE-grade charisma and acrobatic dance moves who was trained in Taekwondo almost from infancy by his Air Force officer father before adding some basic wrestling to his repertoire in high school.

Collier’s the better fighter in all areas at this point despite having no athletic background whatsoever until he began training MMA at age 20 as a way of taking the flab off (it obviously stopped working). Barnett is the wilder fighter in all areas, capable of retiring a fattened-up Gian Villante with a spinning wheel kick and holding his own against Olympic wrestler Yoel Romero in a submission grappling exhibition yet equally capable of getting beaten into a fine powder by giant heavyweights Martin Buday and Ben Rothwell.

Few of Collier’s fights are memorable but most are technically sound. Pick a Barnett fight at random, whether his knockout of 300-pound Romanian brawler Alexandru Lungu at Road FC 47, his split decision loss to Fedor protege Kirill Sidelnikov at Rizin 1, or his unanimous decision victory over Walt Harris—a man who would get a brief push as a rising star in the UFC before suspect cardio did him in—at WEF 46, and you’re guaranteed an unorthodox banger (the last of these saw Barnett blitzing the fast-twitch Harris in the third round, not the other way round).

This one started Collier’s way, with clean, powerful striking leaving Barnett wobbling on his feet—though, to be fair, this seems to happen to in every Beast Boy fight—before Collier landed a nice takedown and controlled Barnett for the remainder of the round, delivering heavy ground and pound in the process. Barnett’s left eye closed and his jaw appeared to break, about as brutal a beating as I’ve ever seen a heavyweight absorb while remaining conscious—worse by far than the night-ending ultraviolence visited upon him by Rothwell (who choked Beast Boy out) and Buday (who appeared to badly damage Beast Boy’s ribs before sending the fight to the judges’ scorecards with an inadvertent elbow to the back of the head).

Because of the weight miss, Barnett had endured all of this abuse for 20 percent less of his modest five-figure purse. Despite that, he stormed out of the gate in the second round and brought the fight to Collier, who was clearly tired after brutalizing his opponent for the better part of the previous five minutes. Collier’s gas tank was the one attribute that has worsened since he moved up in weight—he moves cautiously under the best of circumstances nowadays—so Barnett’s improbable barrage of kicks and punches had him on the back foot. Beast Boy’s above-average wrestling, which comes and goes in his fights, reemerged toward the middle of the second round, enabling him to hit a whizzer and then a go-behind after a sloppy takedown attempt from a tired Collier. The result was a shocking ground-and-pound knockout I thought I’d never see again until lightweight lunatic Trevor Peek recovered from the beating of a lifetime to do the exact same thing to poor Malik Lewis this week on Dana White’s Contender Series.

Then, with his left eye swollen shut and his jaw swinging back and forth as he spoke, Barnett—who’d already done a celebratory front flip and some breakdancing—proceeded to give an over-the-top post-fight interview thanking the crowd for cheering him while he came back from Collier’s onslaught. It was the stuff of legend, a kind of spectacle that always seems like it’s unprecedented yet happens all too often in this primitive sport: a man, in this case Barnett, overcomes ridiculous odds, fighting like a wounded lion to the delectation of a crowd of degenerate gamblers and their escorts. The Beast Boy has done this before and he’ll likely do it again; this win coupled with the Villante knockout have probably earned him another two or three years on the roster as an entertainment guy, a bruiser who shows up to chew bubblegum and kick ass (and of course he’s out of bubblegum; such luck). But what is Barnett’s endgame? He’s 36, already has 31 MMA fights and six pro boxing matches under his belt, and would appear to have zero chance at winning the heavyweight belt. I suppose that’s fine for him, though, because his heart is truly in the hurt business. For reasons few of us could ever comprehend, he might even do it for free.