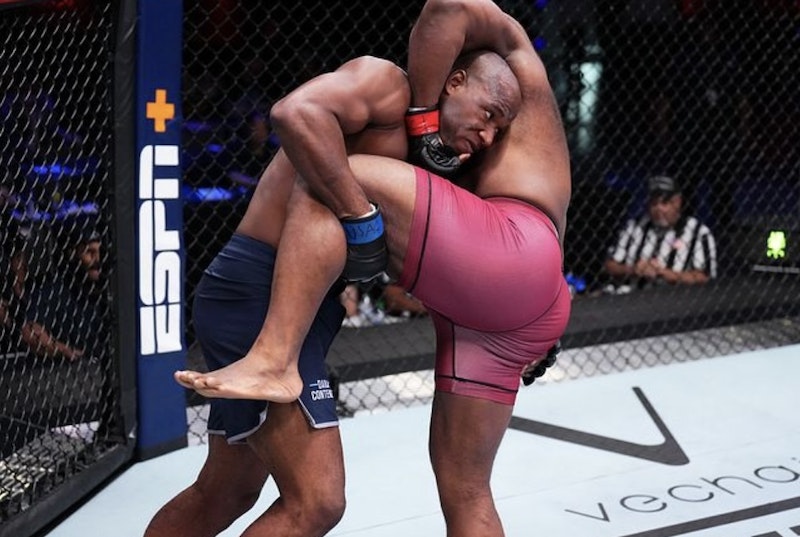 When it comes to MMA, no one knows a thing. This goes double when the competitors are early in their careers, having amassed records that are either meaningless (a 5-0 start with several of those wins coming against the same person isn’t as uncommon as one might think) or meaningful (see, for example, featherweight legend Max Holloway’s 23-7 record, with all but four of those fights happening in the UFC). A lack of information can partly explain ESPN “gambling analyst” (what a gig!) Gianni the Greek’s horrific track record betting the fights during the 2022 season of Dana White’s Contender Series, which has seen the Greek win something like two of his last 18 bets going into this Tuesday’s episode—a historically bad streak, and one that would be much improved if he’d merely placed bets at random.

Gianni whiffed wildly on the latest show too, chasing his usual array of bad bets—all of which are made on gut instinct, because nobody except poor Laura Sanko actually reviews the grainy or nonexistent fight footage for these guys and girls. If Gianni had, he probably would’ve seen 6’3” light heavyweight Karl Williams grounding and pounding Mike “the Black Santa” Amos en route to a decision win on this year’s PFL Challenger Series back in February. Williams, who was born in the US Virgin Islands, wrestled alongside current UFC flyweight Cody Durden at Eastside High School in Georgia (a state not known for producing great athletes in the sport, current WWE star Cody Rhodes’ 2003 and 2004 state championships at 189 pounds notwithstanding) before enjoying brief collegiate stints playing football and running track. Williams stated in his pre-fight promotional package that he dabbled in various sports as his whims and athleticism dictated, coming across as too easygoing to win a fight he took on 10 days’ notice even with the endorsement of Durden, who remembered his former classmate as a strong wrestler.

Gianni the Greek did what most of us would and bet the smart money in this fight, casting his lot with the 6’, 265-pound Jimmy Lawson, who became an All-American heavyweight wrestler at Penn State after two years spent on the gridiron at Monmouth University. Lawson, who’d dismantled the obese but always game Marino Eatman (what a surname!) a few months earlier, had received his initial MMA training from legendary wrestler Daniel Cormier and, as he matured, began to resemble a more muscular version of ACA heavyweight kingpin Tony Johnson. Lawson’s only loss came in his first fight—on Dana White’s Looking for a Fight web series, no less—but it looked justifiable in retrospect as Said Sowma, who won the decision, rose up the ranks in Bellator and eventually even defeated all-time great Vitaly Minakov.

Still, Lawson had something of a cowardly lion quality. He fatigued against the well-conditioned former swimmer Sowma, and if you go back and watch him in the 2015 NCAA wrestling tournament, he got wrecked by NC State heavyweight and eventual champion Nick Gwiazdowski in an 11-3 match in which Lawson basically just rolled over against the much taller, more athletic wrestler. The same thing occurred in the consolation bracket, when Lawson—built like a brick shithouse, as muscular as anyone in the tournament—lost a 10-1 major decision to the svelter, slicker Mike McMullan of Northwestern in the third-place match, finishing sixth on the strength of a performance that would’ve constituted a success for anyone else yet remained a disappointment for the two-sport star.

History would repeat itself against Williams. Despite being talked up by commentator and mentor Daniel Cormier, who never misses an opportunity to praise elite wrestlers from blue-chip college programs, Lawson hit the mat like a sack of potatoes as Williams secured his first takedown. Lawson perhaps could’ve stuffed that one, sprawling and then going around Williams as he surely had many times in his long career, but the bigger man’s torso, bending backwards to evade Williams’ speedy jabs, was well behind his legs—a situation that repeated itself for three rounds, as the Eastside High School wrestler amassed three takedowns and 11 minutes of control time against the Penn State star. Lawson, whose “heavy hands” were cited as difference makers by Cormier, landed a mere five strikes (only one of which was significant!) against 88 for his opponent. In the post-fight interview, Williams, who weighed in at 230 pounds for the fight, told Laura Sanko he’d prefer to return to light heavyweight if signed, and then took a few seconds to inform Sanko and the fans at home that Pitt wrestling, not Penn State wrestling, was superior (Williams, as far as I could determine, has no ties to the University of Pittsburgh, but this alum appreciated the insult, inaccurate though it might’ve been).

When Dana White reluctantly signed Williams to a UFC contract at the end of the show, he expressed reservations about the nature of the fight—a boring, ground-based slog without a finish, the sort of tedious affair that the kayo-obsessed White despises—as well as Williams’ advanced age (which is strange, given that Williams is 32 and the average age of a UFC heavyweight is around 34). He mentioned in passing that he was impressed with how Williams handled a more skilled grappler, yet failed to emphasize how great the discrepancy in experience was: a fighter with a few years of middling high school experience manhandled a much more powerfully built wrestler from one of the most storied programs in NCAA history.

Williams’ ground control—stifling in his other bouts as well—will serve him well in the UFC, and his ability to execute this kind of game plan speaks not just to the uncertainty of MMA but the distribution of skills throughout the major sports. Across numerous interviews I’ve conducted with athletes in niche or lower-profile sports—amateur wrestling, strongman, arm wrestling, powerlifting, and others—one recurring theme is that the pool of competitors in each is far from the cream of the crop; such multi-tool athletes wind up in football, basketball, baseball, tennis, or one of the other sports capable of paying its top stars an eight-figure salary at the professional level. Lawson was an elite wrestler, to be sure, but on this day he was beaten by a vagabond athlete who claimed he’d been fighting for fun since his childhood in the USVI. For all its ostensible optimizations and strategic advances—-most of which give way in the opposite direction in a year or two, not endlessly progressing into a bright future so much as shifting back and forth—MMA remains a somewhat rudimentary sport in which a lithe, spider-legged rando or a skinny-fat brawler can still take down an Olympic wrestler or submit an ADCC submission fighting world champion. I can’t speak for those of you who have followed me all the way to this kicker, but we amateurs—“lovers” of sport, etymologically speaking—surely ought to love to see it.