Opponents are forced to wait for her regal arrival on the court. 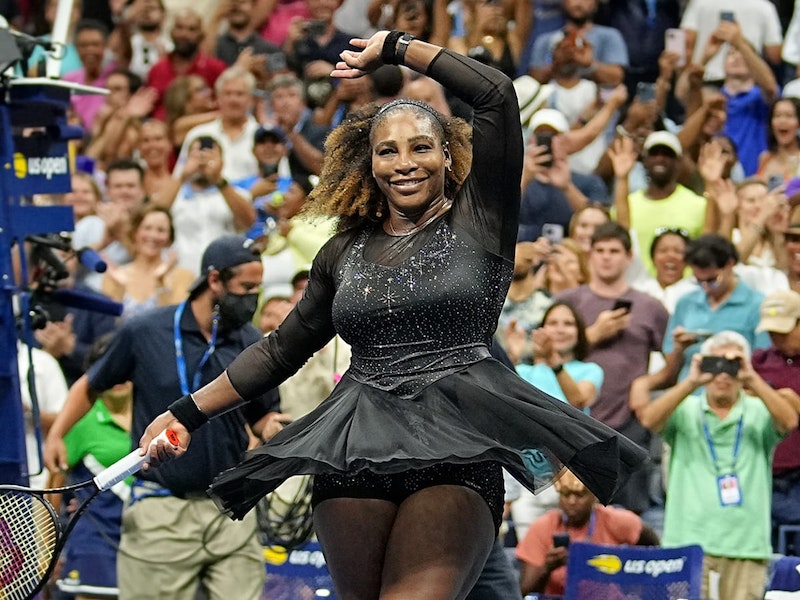 Imagine a one-on-one sports competition in which a player comes out first, takes a seat, and then has to watch an "inspiring" tribute video, dedicated to their opponent before that opponent emerges from a side door to an already warmed-up crowd. One might speculate that this is how they do it in North Korea, but this is what's happening right now in Queens at the U.S. Open tennis championship, with Serena Williams, the most deified player in tennis history, as the recipient of special treatment. Anyone in the tennis or media world finding this bizarre spectacle unpalatable is advised to consider their words carefully before speaking publicly, because any criticism aimed in Queen Serena's direction is frowned upon.

That's why I was pleasantly surprised when Canadian tennis player Genie Bouchard, working in the Tennis Channel broadcast booth, pointed out how unfair this is to Serena's opponents. Top tennis coach Paul Annacone, who was on the same panel, agreed with Bouchard, but in a delicate way, because everything's delicate with Serena. But it's outrageous that, at the highest level of competition in the sport, the tournament organizers are more interested in making it into a Broadway production, using other women tennis players as props.

I don't expect to hear another doubtful word on the air about anything involving Serena for the rest of this tournament, which she says will be her last U.S. Open. Here's what I'll be hearing more of:  Two days after 41-year-old Serena Williams won her opening match in Flushing, Queens, U.S. Open tennis championship, I had the misfortune of tuning into ESPN's First Take and being subjected to two out of the three (Skip Bayless wasn't there) most unbearable TV sports pundits—Stephen A. Smith and Chris "Mad Dog" Russo—chatting with the blandest of sports pundits, former tennis pro James Blake, whose Harvard education has prepared him better for the job of White House press secretary than anything requiring the ability to entertain, or even keep people from nodding off. Normally, I'd switch channels right away when I see either Smith or Russo on the screen, but I wanted to see how this discussion of Serena would go. Blake posited that Serena is the tennis GOAT, period. There's no need to delve too deeply into this inanity, but Serena has regularly, throughout her career, played opponents in the early rounds of tournaments who weren't good enough to play on an average men's college tennis team. Men's professional tennis is Major League Baseball, while the women's version is AAA ball. The women's game is slower and less powerful, making it less exciting to watch than men's tennis.

The most telling exchange in this TV segment was when Smith claimed that denying that Serena is not the women's tennis GOAT is "blasphemy," with Blake concurring. It's like drawing Jesus dressed in drag, or drawing Muhammed, period. It's sacrilegious, so no debate on the topic's allowed. Chris Russo doesn't believe Serena's the GOAT, so he wasn't given any time to spread his blasphemy, a word which has no place in a sports debate.

There's an air of religion and royalty surrounding Serena Williams. During the farewell ceremony the U.S. Open threw for Serena after her first-round evening match, the ESPN broadcasting crew fawned over and over again over her black, diamond-encrusted (from her own jewelry collection) custom Nike outfit she was reported to have taken "a hands-on-approach" to designing. By the looks of that dress, the 23-time major tournament winner will soon be transitioning into a competitive figure skater. It's weird to pay so much attention to what a rich tennis star is wearing.

"Breathless" is the key word in describing the media's coverage of Serena's swan song tour. Caitlan Moran, an author with 875,000 Twitter followers tweeted, "Serena Williams, playing possibly her last-ever match, covered in DIAMONDS, as her daughter, also covered in diamonds, cheers her on, is severely immortal." Try to imagine humble men's tennis champions like Roger Federer or Rafael Nadal entering the court to celebrate themselves wearing something like a diamond-encrusted warm-up jacket, and the reaction that would elicit.

Perhaps that gaudy, exorbitantly-expensive black dress (a number of observers on Twitter called it "hideous") is just another indication that, to Serena, everything is always about Serena. In 2009, she was given a point penalty on match point at the U.S. Open, which meant she lost her semifinal to Kim Clijsters, 6-4, 7-5. A lineswoman had called a foot fault on the crucial point, and Serena responded, "You don’t know me. You better be right. I could shove this fucking ball down your fucking throat." The lineswoman ran to the chair umpire and claimed that Serena had also threatened to kill her, which Serena denied. Later, in the press conference, Williams said, "I don't know why she felt threatened." Maybe it was the thought of a bulked-up, livid-with-anger tennis player shoving a tennis ball down her throat. This went way beyond any bad behavior John McEnroe ever exhibited, but when a reporter at the post-match press conference asked if the lineswoman deserved an apology, Serena responded, "An apology for?" When someone has the level of self-regard that Serena does, there's no room for contrition.

And then there was Serena's disgraceful performance while Naomi Osaka, who idolized her, was creaming her at the 2019 U.S. Open. Chair umpire Carlos Ramos of Portugal had called three code violations against her. The first for her coach coaching her—via hand signals—from the stands, the second for smashing her racquet, and the third for verbally abusing Ramos by calling him "a liar" and "a thief," and then insisting on an apology from him, a ludicrous demand. The first code violation was merely a warning, so Serena could've easily ignored it and played on, but I suspect she knew Osaka was going to beat her and felt that a meltdown was the best way out of the situation, even if it tainted Osaka's victory.

To the event referee, Williams asked, "Because I'm a woman, you're going to take this from me?" Perhaps, in her frenzy, Serena had forgotten that Naomi Osaka was also a woman—a woman who hadn't just received three code violations. Osaka defeated Serena in that final, but like Kim Clijsters, she was robbed of the opportunity to celebrate her victory, which was her first major title. Instead, she cried during the championship ceremony.

Serena Williams is a true champion who deserves all the accolades she's now receiving for her play over the years. That she was able to overcome her upbringing in Compton, California is an inspiring story to all the other minority kids wanting to improve their lives via the tennis court. You'll hear only the inspiring side of Serena until she retires in the near future—all about what a role model she is. But what kind of role model threatens a linesperson half her size with violence and then, in the press conference, pretends to be confused when asked if she should apologize?

Remember, Novak Djokovic has never threatened to stuff a tennis ball down someone's throat, nor has he manufactured a breakdown as a way to deflect a loss in the finals of that tournament, but when he plays his final U.S. Open as the holder of more major singles titles than Serena Williams, the tournament won't be making Djokovic's opponents watch his greatness on video as they wait for him to make his grand appearance, clad in some eye-catching outfit, on the court. Djokovic's not in the "protected" category Serena's in.