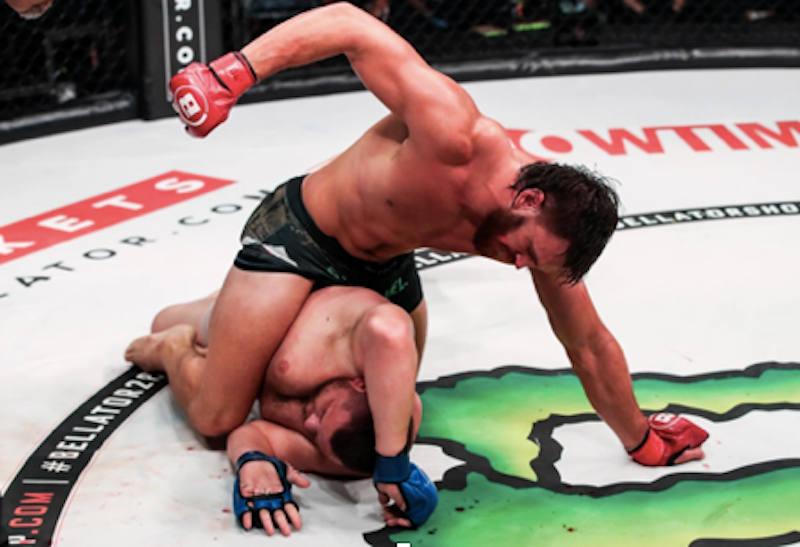 The world of MMA, like the world of pro wrestling, is unspeakably deep in 2022. I write “unspeakably” because there aren’t enough words to discuss even the surface of it. Most fights on the undercard of a weekly UFC Fight Night event escapes notice, and hardcore fans struggle to keep up with what’s happening in Bellator, the PFL, ACA, Rizin, and BKFC, much less all the regional promotions.

But I watch for all those soon-to-be-forgotten fights, because if they’re not chronicled at once, will they ever be? Consider, for example, the Lee Chadwick-Przemyslaw Mysiala light heavyweight fight at last week’s PFL Playoffs. It wasn’t a main card fight, merely a qualifier for next season’s European edition, and the two men in it were a combined 76 years old.

Neither Chadwick nor Mysiala looked like a light heavyweight—Chadwick is far less ripped than he once was in his prime, and Mysiala used to sport an Orion’s belt rather than the bulky old-man musculature that has him moving more like a Polish mummy than the “Polish Bear” he uses as a nickname.

It was, in other words, a heavyweight fight in all but classification. Both men are listed at 6’ with 72” reaches, generous estimates to be sure. And if either was below 230 pounds in the cage, it certainly wasn’t obvious to the audience.

The bout proceeded like a mid-2000s museum piece, which makes sense because Mysiala and Chadwick trace their careers back to 2004 and 2006, respectively. The first round consisted of Mysiala—the better wrestler, though this doesn’t mean a lot when one is fighting a British fighter, even one schooled in the discipline—taking Chadwick down and holding him there, patty-caking him with soft blows and expending his precious stamina in the service of a “lay and pray” approach to winning the round. The second round saw Chadwick taking charge, using superior striking to send Mysiala, who’s been kayoed by the likes of Mo Lawal and Maurice “Crochet Boss” Greene and is obviously quite gun-shy, into a defensive shell—leaning against the cage, taking deep breaths, and hoping for the best. In the third, Chadwick maintained his offensive, but Mysiala was able to take him down a few times, a state of affairs that might’ve helped the Pole eke out the win under the round-scoring rules that existed when he entered the sport.

Time passes, though, and those earlier rules, which prioritized ground control and striking volume, have given way to new rules emphasizing “damage” and “effective striking.” By that measure, “Polish Bear” Mysiala was out of luck, with “Butcher” Chadwick earning a unanimous decision in a fight between living, lumbering fossils that fused past and present. Don’t get me wrong: its aesthetics were beautiful, ugly in a way that reminds you how perfectly enjoyable that ugliness once was, and the right man got the win. Mysiala has had the bigger matches and is further down the far slope of his career’s arc than Chadwick, yet neither man is a spring chicken. If Chadwick turns up in PFL Europe and somehow wins it, then his career is complete. If he doesn’t, then it isn’t, but that doesn’t mean his career will end in either case. He and Mysiala are men who put their health on the line to cash those little checks, throw looping punches, and grapple with their t-rex arms—fighting to live, not living to fight. What else is out there, besides coaching others and the obscurity of the grave?

24-year-old Bailey “Berserk” Schoenfelder and 25-year-old Mark “the Jackhammer” Currier are at the opposite end of the spectrum, a combined four fights into their career when they met at Bellator 284. Although that event was about the end of an era—the era in which the distinguished Gracie family could conceivably produce MMA champions, represented here by welterweight contender Neiman Gracie, who was unceremoniously knocked out by beefed-up lightweight Goiti Yamauchi after being goaded into a crude fistfight—it also marked the beginning of one for Schoenfelder.

The 6’5” Currier, a baby-fat Iowan who resembles a young Ben Rothwell, was surely considered a mere warm-up for the 6’3” former University of Minnesota linebacker Schoenfelder, a rangy, muscular Minnesotan in the mold of fellow natives Jesse “the Body” Ventura and pro boxer Joey Abell. But Schoenfelder, a four-time Academic All-Big Ten winner and a high school wrestling champion at 195 pounds, decided to hold off on utilizing his considerable mat skills against Currier, preferring instead to trade hands with the slightly taller man. The result was an entertaining two-round affair, with Currier withstanding Schoenfelder’s hardest blows in the first round—including some shots directly on the chin that could’ve felled Victor the Wrestling Bear—and returning fire with slow jabs and straights of his own that rocked Schoenfelder in turn.

This was exactly what Schoenfelder wanted, he explained during the post-fight interview. He craved a bloody brawl, and Currier obliged him by proving far tougher than advertised. In the second round, Schoenfelder imposed his will on the ground, repeatedly taking Currier down and pounding him with hard shots before submitting him via rear-naked choke. It was an inevitable win by the superior fighter that seemed in jeopardy until it wasn’t. There are levels to this game, both in terms of athleticism and ability, and Schoenfelder simply lapped Currier in both respects. Relishing the invincibility that comes with youth and the fact that he, unlike old man Mysiala, has never been knocked out, Schoenfelder could afford to test his chin in order to have some fun.

Whither “Berserk” Schoenfelder? He’s not ready for Davion Franklin or Said Sowma—they’re older and more experienced, even if still early in their own careers—so we can probably expect to see more slugfests against game tomato cans. Currier did yeoman’s work in defeat, and the smarter-than-he-looks Schoenfelder knew how to exploit his opponent’s willingness to mix it up to the delight of the crowd, even drawing boos when he finished the tubby, scrappy underdog.

These were just two fights among dozens of sanctioned pro bouts last week—one between the old, the other between the young. Both are destined to remain footnotes, lost in the mists of streaming history that seems to evanesce as fast as it appears, stored on servers somewhere until the day the lights go off and they aren’t. These pitched battles meant something to me, though, and perhaps now even to you, if you dared to read this far.