The Pirates are a “hodgepodge of nothingness.” 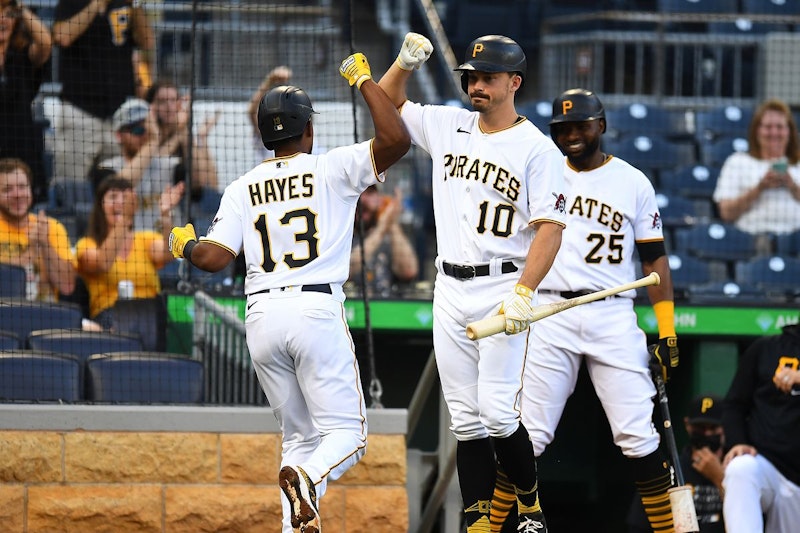 Finally, some press box poetry arrived to sum up the state of my team for yet another wretched baseball season. The Pittsburgh Pirates, whom my grandfather and his father rooted for in Western Pennsylvania, have pretty much admitted to “tanking” for the past four seasons and well into the next two. Get high draft picks, rebuild the minor league system. The tacticians know the correct path to success, based on obscure algorithms and statistical models. How dare you disagree with their slide-rule declarations? A team must tank, you know, like Houston did, and like Tampa did and like Baltimore did, and Kansas City and the Cubs, etc. Pirates fans have heard this line for years.

The owner of the team, Robert Nutting, is a notorious cheapskate who refuses to invest in the team but still develops obscure ski areas in Appalachia and takes advantage of MLB’s luxury tax and blatantly uses the money for his own investments instead of improving player personnel for the Pirates. I have, as a former employee at one of his newspapers in Wheeling, WV, told him at a Spring Training game in Bradenton, FL that he’s disgraceful to Pirates fans. Sell the team! Let Pittsburgh native Mark Cuban buy it, because he wants to, but the geriatric country club MLB owners don’t want Cuban sitting in their snooty lounge where they are served drinks and food by old-fashioned butlers who don’t tolerate youthful “mavericks.”

On August 16, when the Pirates hosted the Boston Red Sox, NESN commentator Dennis Eckersley, a former MVP and Hall of Fame pitcher, said this about the Pirates on the air as Boston was up 5-0 in the fifth inning: “You talk about a no-name line up. There’s no team like this. This is a hodgepodge of nothingness.”

Three words of poetic brilliance from the native of Fremont, CA whose first wife ran off with this best friend and teammate Rick Manning of the Cleveland Indians back in the late-1970s when the MLB was in its swinging era.

Eck’s a bit of a loose cannon for NESN, and it’s always entertaining to have one of those guys on your broadcasting crew. It would’ve been nice if Eck specifically called out Pirates ownership during his semi-rant, but as my uncle Bud used to say, “You can’t have everything in this life.”

What I enjoyed the most about the “Hodgepodge of Nothingness” quote is the viral online reaction it drew from frustrated Pirates fans who’ve been victimized by this selfish, greedy owner. There was a riveting and apoplectic reaction from a true basement podcaster called “Steel Sermon” and there were 955 retweets of Eckersley’s comments and 3920 likes on the same Twitter feed. A t-shirt was designed with this phrase within 72 hours. Rapid response is a thing of beauty when opinions run wild in an era of overblown “woke” caution.

To me, “Hodgepodge of Nothingness” had the same impact as Hillary Clinton’s “Basket of Deplorables” description of Donald Trump supporters during her ill-fated 2016 campaign. It has the same cadence and meter. And the honest baseball comment was coined by a high school educated ex-jock who spent 23 seasons in the big leagues, sporting Deadwood style long hair and mustache, often shooting his opposing batters with invisible guns from an invisible holster on his hip.

Eck’s phrase defines this team much like “25 players, 25 cabs” defined the Thomas Yawkey-era Red Sox who later became “The Idiots” during Johnny Damon’s success. “Nothingness” is the Pirates version of the Big Red Machine, or their own 1997 branding as “The Freak Show” when they challenged for the division lead against Houston with a $9 million payroll. Nothingness is our “Bash Brothers” in Oakland, or Harvey’s Wallbangers in 1982 Milwaukee, or the Blake Street Bombers in mid-1990s Denver, or the tanking “Lastros” in Houston via 2011 to 2013, or Murderer’s Row and the Bronx Zoo for the Yankees, or Slam Diego in 2020. Heck, why not go back to the 1934 Cardinals who were known as the Gashouse Gang?

Eck, in the NESN booth since 2003, announced two weeks ago that he’ll retire from broadcasting at the end of this season which has been quite disappointing for the high-payroll Red Sox. Many fans took the “glass houses” approach for a Red Sox announcer to belittle the low-budget Pirates who are also (once again) in the cellar of the NL Central.

The crowd-sourcing began the next day as the comment sections for all of the newspaper articles and Twitter retweets planted a seed of revolutionary action aimed at getting the wretched owner of the Pittsburgh Pirates to release the historic franchise to someone who cares about competing and winning. Here’s one from the Pittsburgh Post-Gazette comments penned by a guy named Mike Silverstein: “In a college philosophy course, we studied Sartre and meaninglessness and nothingness. Years later, I drove the empty Texas desert between San Antonio and El Paso. Hour after hour of nothingness. But not until I saw this year's Bucs' lineup of .170 hitters did I fully comprehend Jean-Paul Sartre's concept of meaninglessness and nothingness.”

A guy named Jack Tripper also contributed a comment: “All Eck did was point out publicly what Pirate fans have been saying for the last couple years (since 2015). If your average Pirate fan was on tv, a national audience would tune into Pirate games to hear our ramblings about Nutting and the overall awfulness of this franchise.”

I had an old-school response that Eckersley’s comment was “bulletin board material” (or Apple tablet download material for each individual player) and would inspire a heated response the next day. The Bucs did handily beat Boston 8-2 the night following Eck’s assessment of our squad. And they beat the Reds in a walk-off situation with former Boston player Michael Chavis the following night. Usually “bulletin board material” comes from opposing player’s comments. Several Pirates players told reporters they’re not concerned about opposing team broadcasters, which seems apropos, if you ask me. But Eck’s credentials mean something.

There’s something to be said that a seemingly flippant mid-week comment during an obscure interleague broadcast would reverberate with such energy. Apparently, Eck doesn’t have the filter that so many announcers have to prevent ruffling home team front office feathers or drawing the rancor of sponsors. His candor is probably related to his ensuing retirement from a media trade that has become a bland exercise in broadcasting/public relations. This is a guy who no-hit the California Angels at Cleveland Stadium on May 30, 1977, in front of 13,400 souls, many of them hobos who lived in the massive upper deck. Eck defeated Frank Tanana 1-0, benefiting from a sacrifice bunt by Jim Norris to score Duane Kuiper from third after he’d tripled in the first inning.

I was watching the Boston-Pittsburgh game and knew it was destined to end with the Pirates sixth straight defeat. I frequently switched over to Turner Classic to check in on Night of the Hunter. There was priest/killer Robert Mitchum sitting outside the farmhouse and singing hymns into the night that gave me an idea that Pirates fans should camp outside the owner’s house and sing hymns into the wee hours until he caves. West Virginia is, as the license plate used to state “almost heaven.” The owner recently posed somewhat accidentally with a teenager wearing a Pirates shirt with the now common slogan “Sell the Team!” That photo went viral. It’s all the speed of a mouse-click these days. The Pirates owner can’t be pranked enough. An online coup is entirely possible and I throw this article into the digital fire intended to shame Nutting and his blatant disregard for Pittsburgh baseball fans. As one commenter put it under the AwfulAnnouncing.com retweet: “It is a Hodgepodge of Nuttingness.”